How much will California’s EDD scandal cost Gov. Newsom in the recall election? 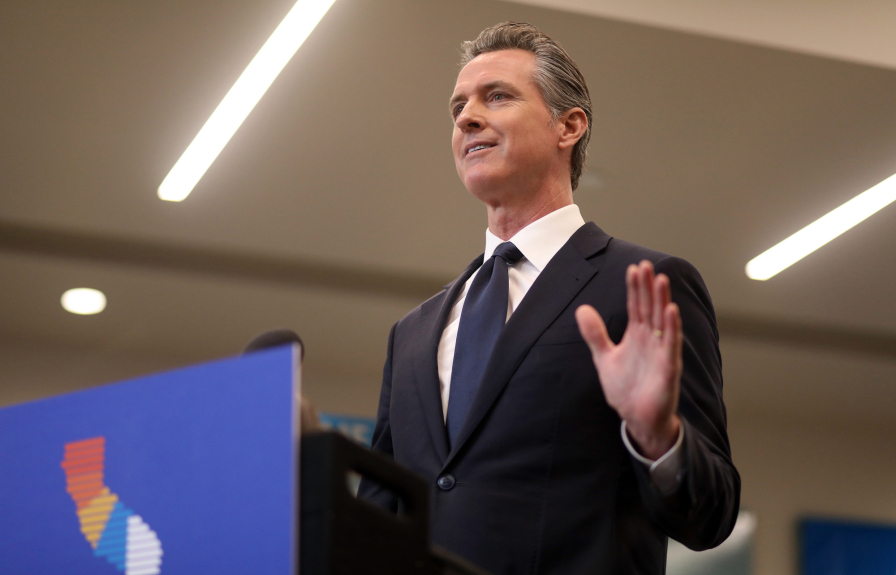 Had Ivy Bland been able to access more than $9,000 of locked unemployment benefits, she and her husband might have been able to put off their move to Florida.

Had Lindsay Green’s benefits not been frozen due to suspected fraud, she might have kept her medical, dental and car insurance — and not been forced to go on food stamps.

Had Susan Baker’s unemployment payments not suddenly stopped, she might have avoided dipping into her savings to make house payments.

On the other hand, had the state Employment Development Department’s system worked perfectly, Ginny Silver might still have only 37 subscribers to her YouTube channel.

The 36-year-old Elk Grove mother of two posts daily videos demystifying the inner workings of EDD by discussing work search requirements, pending payments and tricks for reaching the notoriously backlogged call centers. More than 1 million people watch her videos a month, enough for Silver — who went on unemployment at the beginning of the pandemic when her wedding photography business shut down — to not only get off unemployment herself but also hire an assistant.

She currently makes more money from her EDD videos than she does from her photography business, which resumed once California began to reopen.

People “shouldn’t have to go to a random person on the internet compiling these government documents,” Silver said. “But because the EDD’s communication, website and customer service departments are so inaccessible and confusing, unfortunately, they do come to my channel for that.”

“So while I am happy I have a channel, it should not have a need to exist.”

California’s unemployment department has consistently been one of Gov. Gavin Newsom’s biggest political liabilities during the COVID-19 pandemic. Hundreds of thousands of jobless residents’ claims have been backlogged for weeks at a time even as EDD paid out an estimated $31 billion in fraudulent claims, including $1 billion to prison and jail inmates. With account freezes, jammed phone lines and pervasive tech glitches blocking unemployed Californians from the funds they needed to stay afloat, many called their lawmakers for help, desperate and even on the brink of suicide.

After forming a strike team in July 2020 to overhaul EDD’s outdated technology, Newsom largely avoided commenting directly on the beleaguered department. But his administration has begun to do so, suggesting he’s aware EDD’s shortcomings could be top of mind for a potentially sizable number of voters in the Sept. 14 recall election.

On April 26, the same day Secretary of State Shirley Weber said enough signatures had been gathered to force a recall election, Newsom’s unemployment fraud task force announced it had arrested 68 people and opened another 1,641 cases.

On July 20, the day before Weber certified the final list of recall candidates, the Newsom administration said it had hired a former federal prosecutor to help crack down on unemployment fraud. On July 22, EDD announced it would start automatically paying benefits to certain jobless Californians to help reduce the mountain of unresolved claims.

Recall candidates have pinpointed EDD as one of Newsom’s weak spots while proposing reforms that rely largely on recommendations from the state auditor, such as fixing long-standing operational and tech issues and instituting stronger safeguards against fraud.

Meanwhile, former San Diego Mayor Kevin Faulconer launched a website to collect Californians’ EDD horror stories and slammed Newsom on Twitter for continuing “to do nothing” about the growing claim backlog. Reality star Caitlyn Jenner vowed that as governor, she would “work to the bottom of this corruption” at EDD.

Former Sacramento-area U.S. Rep. Doug Ose said in an interview, “It’s important to listen to what politicians talk about, but it’s also important to note what they don’t talk about. Newsom knows he’s got really dirty hands on this because he never talks about it.”

In Newsom’s March State of the State speech — which also doubled as the kickoff for his anti-recall campaign — the governor acknowledged many California workers have faced “impossible choices” and pledged “economic support for those who’ve struggled most,” citing Golden State stimulus checks, small business relief grants and other expanded safety net programs. But he didn’t specifically mention EDD — a fact that did not go unnoticed by Republican lawmakers.

The Newsom campaign did not respond to a request for comment for this story.

CalMatters talked with California voters — many of them Democrats like Newsom — about whether their negative experiences with EDD had changed their perception of the governor or how they planned to vote in the recall election. Here’s what a few of them said.

Lindsay Green, 39, voted for the governor in 2018. But now the Santa Monica Democrat said she will “one thousand percent” vote to recall Newsom: “I think I was probably one of the first people to put down my name on that recall petition.”

Before the pandemic, Green was flying high. After years of working in retail, she had finally landed her dream job as a travel agent. She had medical and dental insurance and a “great income.”

But all of that began to change in April 2020, when she was furloughed and forced to apply for unemployment benefits. In December, she said, her account was suddenly suspended for identity verification — setting off a chain of problems that resulted in her spending as many as eight hours a day trying to contact EDD. Unable to get her benefits, Green said, “I had no choice but to go on food stamps, because I had nothing.”

She also lost her car insurance, which effectively prevented her from driving: “I’m not going to put myself in a position to, you know, get in a car accident and be in a worse position.” Though she’s regained dental coverage, she still hasn’t been able to obtain health insurance — and was penalized for it on her taxes.

Green said repeatedly that the main thing she wanted from Newsom was for him to acknowledge EDD’s glaring problems — and the hundreds of thousands of affected people — during press conferences and TV appearances.

She hasn’t yet picked a replacement for Newsom, but said, “If he were to come out tomorrow and maybe change his tune, I possibly would change my tune as well.”

“I would have a lot more respect for him if he actually did something about what’s going on,” Green added. “I mean, he made the decision to let out thousands of prisoners because he was worried about COVID.” She questioned why he wasn’t doing more to solve the problems of “good, decent, hard-working people.”

‘I still want what’s due me’

Ivy Bland, 64, no longer lives in California. She moved to Jacksonville, Florida in July 2020, after living in Antioch, Pittsburg and Oakley for the past 20 years. She and her husband had been planning to move to Florida eventually, but difficulties with EDD accelerated the transition.

“California is very expensive to live in,” said the registered Democrat. “If we’d have stayed there without getting the unemployment, it could have been a big problem.”

Bland’s work as a full-time Lyft driver dried up in April 2020. She said that when she called EDD to say she would be moving to Florida, the department said she could still collect California unemployment benefits. But Bland’s checks stopped coming in December, apparently due to identity verification problems and potential fraud. When she finally reached someone at EDD, the representative said she “didn’t have a footprint in the state of California. It was almost like she was saying I never lived in California.”

Bland appealed the case, but said she has so far received only $3,400 of the at least $9,075 she is owed — funds that could have prevented her from borrowing money for rent and going to food banks for the first time in her life.

Bland is no longer registered to vote in California, but said her EDD experience didn’t necessarily affect her opinion of Newsom.

‘It just kept getting worse’

Susan Baker, 70, voted for Newsom in 2018. But the Santa Rosa resident is ready to see another Democrat at the helm of the Golden State.

“It just really irks me that they’re not allowing another Democrat to be on the ballot,” Baker said, referring to the California Democratic Party’s successful efforts to discourage a big name from challenging Newsom in the recall.

Baker filed for unemployment in January 2020 when she was laid off from her job as an office assistant at a law firm. Payments went smoothly at first, but once the pandemic hit, “everything just stopped,” Baker said.

Blocked from her benefits, Baker “cut back on everything.” She tapped into her savings to make house payments and “didn’t spend anything frivolously. … I didn’t eat out, I didn’t buy any special foods.” To help make ends meet, she worked part-time for the U.S. Census, knocking on doors even as the pandemic raged to ask people to fill out the survey that determines California’s congressional representation and level of federal funding.

She also regularly watched the news — an experience she often found frustrating.

“They were painting this rosy picture of everything,” Baker said. “You know, they’re handling everything, and EDD’s getting it under control, and everything’s coming up roses. And it wasn’t like that. It just kept getting worse.”

Baker said she could put up with Newsom being “arrogant” and “wanting to be president.” But she said she was less willing to accept his refusal to acknowledge EDD’s problems or “make it a priority.”

Nevertheless, Baker said she will vote to keep Newsom in office because she doesn’t see any of the 46 candidates running to replace him as a “viable choice.”

Another reason she would have liked to vote for a different Democrat? Newsom’s record on wildfires.

“I mean, I live in Santa Rosa,” which was devastated by the 2017 Tubbs Fire and last year’s Wine Country fires, Baker said. “We lost a lot here. … I don’t feel he’s done enough regarding fire protection. That’s a major issue.”

Ginny Silver, the wedding-photographer-turned-EDD-YouTuber, hears every day from Californians on the brink of desperation because they haven’t received their unemployment benefits.

“I have many claimants that I’ve redirected to a suicide hotline,” Silver said.

“Unfortunately, it goes beyond simply receiving money while you’re being unemployed,” she said. “It stretches into claimants having to ruin their credit, claimants having to get evicted, claimants going into debt. … And while many are trying their best to find suitable work in the process, they’re having these lasting effects as a result of navigating this broken system.”

The sad stories come one after the other.

Eric Szaras, a 37-year old Santa Monica resident and registered Democrat, said he called EDD more than 270 times in the space of a week and a half after his account was frozen due to suspected fraud.

Cynthia Rene Brown, a 64-year-old Los Angeles resident and registered Republican, said she was so frantic that she hired consultants to help her reach EDD, ultimately paying them nearly $4,000 of the $16,000 in benefits she received.

“My opinion of Gavin Newsom has gotten worse since the pandemic and sunk even more with the EDD issues,” Brown said in an email — her cell phone service had been cut off while she awaited benefits. “He just pointed fingers and played the blame game.”

Silver doesn’t discuss politics on her YouTube channel. But the conclusion she’s drawn from spending 30 to 40 hours a week helping Californians is inherently a political one.

“Claimants should not need to come to a random person on the internet in order to obtain these answers.”