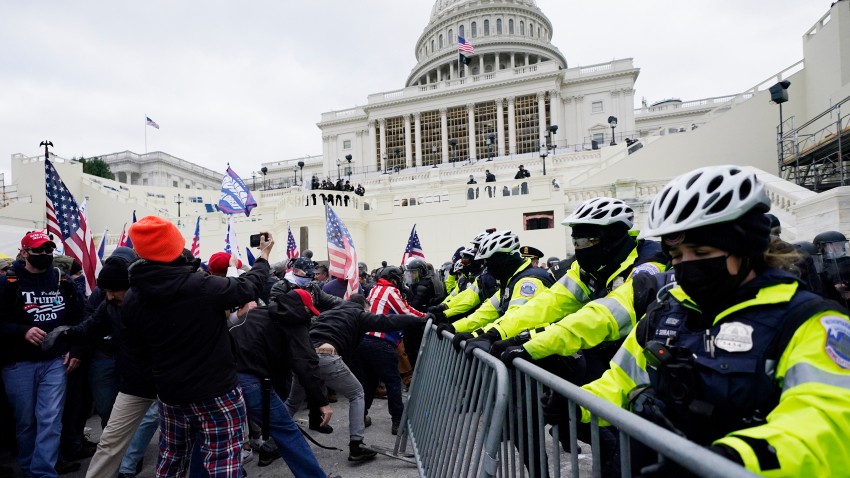 Hundreds of protesters who massed in the nation’s capital to support President Donald Trump’s baseless claims of voter fraud swarmed the U.S. Capitol on Wednesday, forcing police to evacuate parts of the complex as some demonstrators breached barricades on the building’s steps.

The chaotic scene came after Trump spoke to a large crowd in front of the White House, angrily vowing that he would never concede to President-elect Joe Biden.

“We will never give up, we will never concede. You don’t concede when there’s theft involved,” Trump said to a crowd of supporters, some of whom chanted “USA!” or waved anti-Biden banners.. He later falsely claimed Biden would be an “illegitimate” president.

The U.S. Capitol Police said it was evacuated areas near the building as pro-Trump protesters stormed barricades set up outside the perimeter, and law enforcement officers were seen trying to push them back.

The Library of Congress, located directly across the street from the main Capitol building, was evacuated and people were told to remain calm and move in a safe manner to the exits.

Rep. Elaine Luria, D-Va., tweeted that she had to evacuate her congressional office because a pipe bomb was reported outside the Capitol. “Supporters of the President are trying to force their way into the Capitol and I can hear what sounds like multiple gunshots,” Luria tweeted.

Meanwhile, the Republican National Committee headquarters in Washington, just steps from Capitol Hill, was evacuated earlier Wednesday due to a suspicious package, and investigation is underway.

Multiple groups of protesters were set to convene around the U.S. Capitol and National Mall as Congress meets to count states’ Electoral Votes and reaffirm that Joe Biden has been elected the next U.S. president.

Lou Murray, a life insurance salesman from Boston, said he and many others still hoped Congress and Vice President Mike Pence would not certify the Electoral College. “I hope Vice President Pence has courage today, and I hope any politician who thinks he has a future shows courage to stand up and do what’s right,” Murray said.

Pence has no path for avoiding the certification of Biden as the next president.

From the Ellipse south of the White House, the protesters planned to march to the Capitol before the vote. Trump said he would be with them.

At the Capitol, Tim Teller of West Sacramento, California, listened on his phone while Trump spoke. “I want to be able to tell my kids that I did everything I could,” he said.

The crowd gathered at the Capitol chanted, “We want Trump.”

About an hour before Trump was set to speak, there were long, dense lines at security checkpoints near the White House. At the Lincoln Memorial, dozens of Trump supporters stood on the steps with large Trump flags.

Nirav Peterson, who flew in from Seattle to attend the rally, said there would be a groundswell of anger and activism if Trump doesn’t serve another term and said Republicans who don’t back him should face primary challenges.

“People are angry. This isn’t going to go away,” Peterson said as she took video of the large crowd gathered beyond the steel barriers at the foot of the Washington Monument. “You have a huge, huge portion of the people who aren’t going to take it anymore.”

Like many others, Peterson was not wearing a mask. She said she opposes the shutdowns prompted by the pandemic and doesn’t believe anyone has died from COVID-19. More than 350,000 people have died from the virus in the U.S.

A number of prominent Trump supporters were expected to attend the protest events, which began Tuesday with a rally at Freedom Plaza near the White House. They include Texas Attorney General Ken Paxton and longtime Trump ally Roger Stone, the recipient of a pardon by the president.

As temperatures dropped to the low 40s Tuesday night and a steady rain swept onto the streets, hundreds of protesters remained in Freedom Plaza.

“I’m just here to support the president,” said David Wideman, a 45-year-old firefighter who traveled from Memphis, Tennessee. Wideman acknowledged he was “confused” by a string of losses from Trump’s legal team in their attempt to overturn the results of the election and didn’t know what options Trump had left.

“I not sure what he can do at this point, but I want to hear what he has to say,” Wideman said.

Trump tweeted his support for the protesters: “Washington is being inundated with people who don’t want to see an election victory stolen by emboldened Radical Left Democrats. Our Country has had enough, they won’t take it anymore! We hear you (and love you) from the Oval Office.”

In a Tuesday evening tweet, Trump called on Democrats and fellow Republicans to look at the “thousands of people pouring into D.C.” In another tweet, he warned that antifa, the umbrella term for leftist militant groups that Trump has said he wants to declare a terrorist organization, should stay out of Washington.

The rallies had local officials and law enforcement bracing for potential violent street clashes. Many businesses in downtown Washington boarded up their windows, fearful that the protest could devolve into the unrest seen in May and June when dozens of businesses were vandalized.

District of Columbia Mayor Muriel Bowser called in National Guard troops to help bolster the city’s police force. She urged residents to stay away from downtown Washington and to avoid confrontations with anyone who is “looking for a fight.” But, she warned, “we will not allow people to incite violence, intimidate our residents or cause destruction in our city.”

Police reported 12 protest-related arrests on Tuesday and Wednesday for a variety of offenses, including weapons charges, assault on a police officer, simple assault, possessing a stun gun and other violations.

Election officials from both political parties, governors in key battleground states and Trump’s former attorney general, William Barr, have said there was no widespread fraud in the election. Nearly all the legal challenges from Trump and his allies have been dismissed by judges, including two challenges rejected by the Supreme Court.

A pro-Trump rally Dec. 12 ended in violence as hundreds of Trump supporters, wearing the signature black and yellow of the Proud Boys, a far-right extremist group, sought out confrontations with a collective of local activists attempting to bar them from Black Lives Matter Plaza, an area near the White House. At least two local Black churches had Black Lives Matter banners torn down and set ablaze.

On Monday, police arrested the leader of the Proud Boys, Henry “Enrique” Tarrio, 36, after he arrived in Washington before this week’s protests. Tarrio was accused of burning one of the Black Lives Matter banners in December and was found with two high-capacity firearm magazines, police said. A judge signed an order Tuesday banning Tarrio from entering the District of Columbia, with very limited exceptions related to his criminal case.

In addition to the National Guard, federal agents were on standby, in case they were quickly needed in the city this week.

The federal Bureau of Prisons said about 100 “specially trained officers” were sent to the Justice Department headquarters to assist other security personnel but would remain “in a reserve capacity unless needed.”