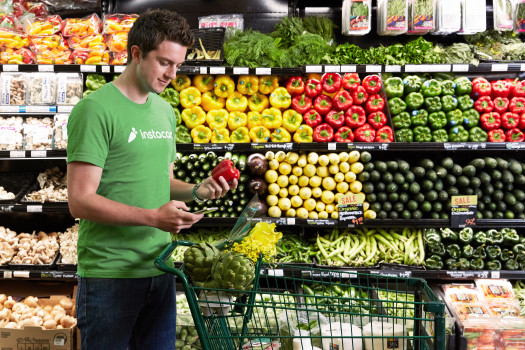 At a time when people forced to stay at home by the coronavirus pandemic are relying heavily on food-delivery services, workers for groceries-to-your-door company Instacart say they’ll walk off the job Monday if they don’t get hazard pay and personal-safety products.

“They are profiting astronomically off of us literally risking our lives,” said a group that has said they represent thousands of the company’s “shoppers” who shop for groceries at stores and deliver them to people’s doors.

In response to the workers’ threat on Friday, Instacart said the health and safety of its shoppers and customers were its first priority.

“Our goal is to offer a safe and flexible earnings opportunity to shoppers, while also proactively taking the appropriate precautionary measures to operate safely,” the company said in an emailed statement. “We absolutely respect the rights of shoppers to provide us feedback and voice their concerns. It’s a valuable way for us to continuously make improvements to the shopper experience and we’re committed to supporting this important community during this critical time.”

Food-delivery jobs have been deemed essential by the shelter-in-place orders that have cloistered millions of Americans in their homes. Workers’ rights advocates have said that essential workers such as those at Instacart, along with grocery employees and ride-share drivers, are at increased risk of contracting the virus, while receiving relatively low pay.

The Instacart workers’ group is demanding an extra $5 per order in “hazard pay,” plus a change in the Instacart app to push the default tip amount to 10% of the order total from what workers say is zero to 5%. They want “safety precautions” for no cost, with the minimum supplies being hand sanitizer, disinfectant sprays and wipes, and soap. They’re also demanding increased and extended pay for shoppers having “a doctor’s note for either a pre-existing condition that’s a known risk factor (for COVID-19) or requiring a self-quarantine.”

The group said in a Medium post threatening the job action that they have been urging the San Francisco company to “take proper safety precautions” but have been ignored.

Instacart in a Medium post Friday said it was offering up to 14 days’ pay for any shopper diagnosed with COVID-19 or placed by authorities in mandatory solo isolation or quarantine. The firm also said it would give shoppers bonuses of $25 to $200, based on number of hours worked from March 15 to April 15.

Shoppers’ earnings “have been increasing considerably as customer demand has surged over the past few weeks,” Instacart said in the post.

The company added that it was changing its app so shoppers won’t have to hand their phones to customers to sign for alcohol deliveries, unless state authorities or the alcohol retailer require a signature.

Instacart and its shopping-and-delivery workers have been embroiled in disputes since 2016, over pay and the app’s tip settings. In 2017, the company, without admitting wrongdoing, agreed to settle a class-action lawsuit by shoppers over alleged improprieties with tips, expense reimbursement, and a service fee said to look like a tip but instead going to the firm.

In November, workers who had walked off the job over a tipping dispute said the company cut a bonus program in retaliation for the job action. Instacart said removal of the $3 bonus for five-star customer reviews was not done in retaliation, but because the bonus program “did not meaningfully improve quality.”

The company and its shoppers are also in conflict over California’s AB-5 “gig worker” law, which classifies many workers as employees entitled to benefits rather than as independent contractors. A state court judge in San Diego ruled in a February preliminary injunction that Instacart was probably misclassifying shoppers as contractors instead of employees.