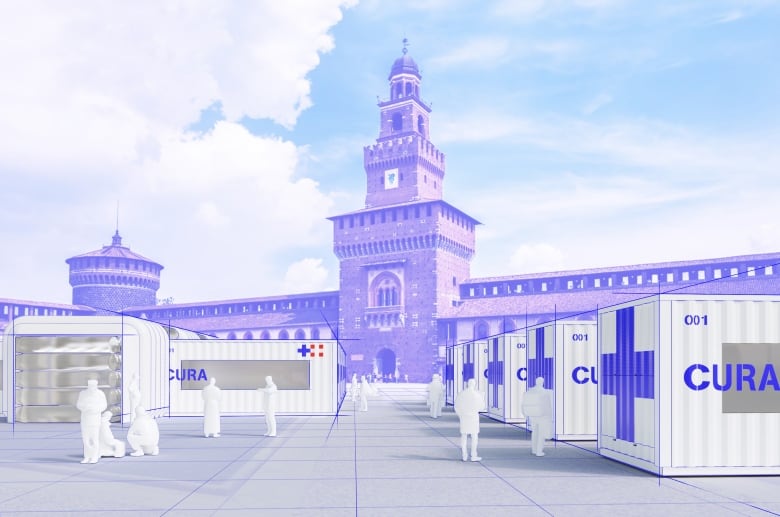 A group of architects and engineers is working to convert shipping containers into intensive care units to help hospitals that are running low on space for COVID-19 patients.

The open-source project, dubbed Connected Units for Respiratory Ailments (CURA, or Latin for “cure”) is harnessing the skills of experts from around the world to develop self-contained, mobile ICUs that can be plugged into hospitals or installed in parking lots.

“At the beginning we had around 100 people working on the design. But since making it public, over 2,000 people actually got interested in the project,” Carlo Ratti, CURA co-founder and director of MIT’s Senseable City Lab, told Day 6 host Brent Bambury.Ratti said the first prototype unit, currently under construction in Italy, is nearly complete and is scheduled to be deployed in a hospital in Milan, one of the country’s epicentres for the COVID-19 pandemic.

CURA units are designed to be far more than a giant metal box with a couple of beds inside. Each is set up with negative air pressure, creating a “bio-confinement” environment that can restrict the virus from leaving the chamber, Ratti explained.

It’s one major advantage over the tent city-like triage centres that hospitals have been setting up to cope with the influx of patients, which Ratti said could put doctors and other health-care workers at risk of infection.

“By using containers, we are trying to combine the best of both worlds: having something as quick to deploy as a tent, but also safe to operate as a proper hospital with negative pressure in bio-confinement,” he said.

“I think the most complicated thing is … all the mechanical components inside in order to create negative pressure, to do heating and cooling. But once you sorted that out then it’s quite easy to produce it,” he said.The medical equipment for two beds in each pod adds up to about $150,000 US ($210,000 Cdn) per container. Ratti said teams in Asia, Europe and the Americas are working on prototypes, and hope the price tag can be reduced if production begins to ramp up.

Federal health officials in Canada said Thursday there could be between 23,000 and 46,000 ICU admissions over the course of the pandemic, if 2.5 to five per cent of the country’s population became infected with COVID-19.

In Ontario — one of the provinces hardest hit by the pandemic — modelling released April 3 showed it would need to add an extra 900 intensive care beds to cope with a projected steep rise in COVID-19 patients over the following two weeks.

Not just a pretty facade

Ratti hopes that his project will help shift a popular view — both among outsiders and some in the profession — that architecture is concerned first and foremost with aesthetics and beauty over form and function.

“If, as designers and architects, we keep on looking at you know, just beautifying useless objects, then it’s going to be oblivion,” he said, channelling a quote from American architect and theorist Buckminster Fuller.

“But if [we] are going to tackle the main challenges that we have today — think about climate change; think about, in this case … the response to the pandemic, but many, many others — then architecture and design can really play a central role in our society.”