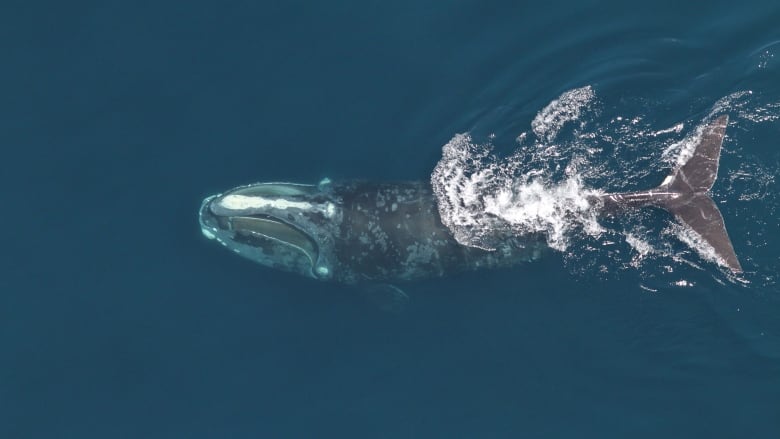 Climate change and warming ocean temperatures could be contributing to the decline in the population of North Atlantic right whales, a new study suggests.

Until about 2010, the whales could be found feeding on copepods, or tiny crustaceans, like plankton — a common food source for them — in their traditional feeding waters of the Bay of Fundy and Gulf of Maine, according to the study, titled Ocean Regime Shift is Driving Collapse of the North Atlantic Right Whale Population.

In the past 10 years, however, warmer ocean temperatures have driven the crustaceans to the Gulf of St. Lawrence, and the right whales have followed.

“As right whale numbers visiting the southern Gulf of St. Lawrence foraging grounds rose, the risks associated with ship strikes and entanglement increased,” according to a peer-reviewed report published Wednesday in Oceanography magazine.

“With no management plan in place to protect it, the right whale population experienced an increasing number of serious entanglements and mortalities in the southern Gulf of St. Lawrence beginning in 2015.”

Since 2017, 34 dead stranded whales have been found in Canadian and U.S. waters, with entanglements or vessel strikes being the leading cause of death, according to the U.S. National Oceanic and Atmospheric Administration.

The problem goes back to climate change and the impact it has had on ocean currents, namely the Gulf Stream, which moves warm water north, one of the study’s co-authors said.

Kimberley Davies, who is also an associate professor of biology at the University of New Brunswick’s Saint John campus, said that as global temperatures have warmed, the Gulf Stream has changed, bringing warmer water into areas of the Bay of Fundy and Gulf of Maine.

Waters in those regions have warmed by as much as 2 C. That in turn has driven crustaceans to cooler waters further north, such as the Gulf of St. Lawrence, where right whales have been at higher risk of getting entangled in fishing gear and being struck by vessels, Davies told  Information Morning Fredericton on Friday.

Davies said such mortality events are devastating to “a population of 350 whales where … it takes 10 years for them to mature and produce their first calf.”

Davies said 2021 has been a good year for the right whale population, with 18 calves born.

However, she said, the overall low birthing numbers, combined with the high number of deaths in previous years, mean the species is still under threat.

“The fact that there were a lot of years in … the 2010 to 2017 period where there were really, really low numbers of calves points to again some food limitation problems in the population,” as well as other stressors such as entanglements in fishing gear, Davies said.