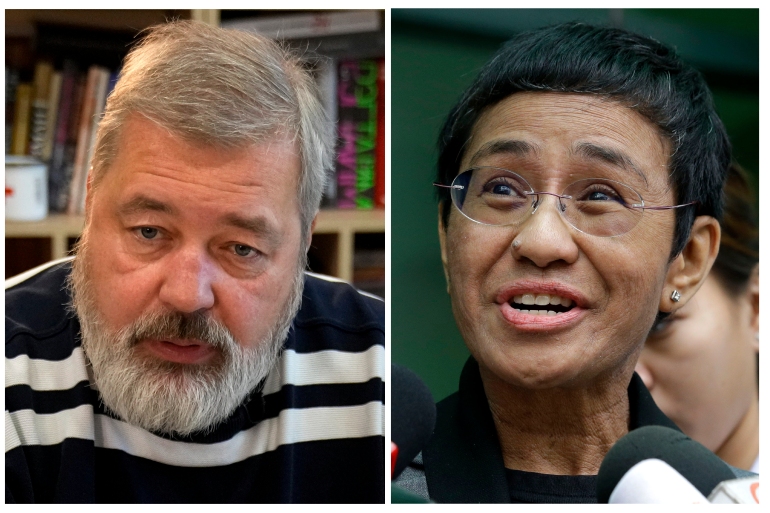 Journalists Maria Ressa of the Philippines and Dmitry Muratov of Russia won the 2021 Nobel Peace Prize on Friday for their fight for freedom of expression in countries where media outlets have faced persistent attacks and reporters have been killed.

“Free, independent and fact-based journalism serves to protect against abuse of power, lies and war propaganda,” said Berit Reiss-Andersen, chair of the Norwegian Nobel Committee, explaining why the prize went to two journalists.

“Without freedom of expression and freedom of the press, it will be difficult to successfully promote fraternity between nations, disarmament and a better world order to succeed in our time,” she said.

The Nobel committee noted that Ressa in 2012 co-founded Rappler, a news website that has focused critical attention on President Rodrigo Duterte’s “controversial, murderous anti-drug campaign” in the Philippines.

She and Rappler “have also documented how social media is being used to spread fake news, harass opponents and manipulate public discourse.”

The award-winning journalist was convicted last year of libel and sentenced to jail in a decision seen as a major blow to global press freedom. She was the first woman awarded a Nobel this year.

Ressa said she hopes the award will bolster investigative journalism “that will hold power to account.”

“This relentless campaign of harassment and intimidation against me and my fellow journalists in the Philippines is a stark example of a global trend that journalists and freedom of the press facing increasingly adverse conditions,” she told The Associated Press.https://www.youtube.com/embed/marAeYOOetg

She also pointed to social media giants like Facebook as a serious threat to democracy, saying “they actually prioritized the spread of lies laced with anger and hate over facts.”

Muratov was one of the founders in 1993 of the independent Russian newspaper Novaya Gazeta, which the Nobel committee described as “the most independent newspaper in Russia today, with a fundamentally critical attitude towards power.”

Muratov said he would use his win to help independent journalists who have faced a growing pressure from the authorities, including those who were officially declared “foreign agents” — a designation that carries pejorative connotations and implies additional government scrutiny.

“We will use it to shore up Russian journalism that has faced repressions,” he said in comments carried by a Russian messaging app channel. “We will try to help the people who have been designated as agents, have faced persecution and have been forced out of the country.”

According to the Committee to Protect Journalists, 17 media workers were killed in the Philippines in the last decade and 23 in Russia.

Former Soviet leader Mikhail Gorbachev used some of his prize money from winning the Nobel in 1990 to help what would become Novaya Gazeta buy office equipment and computers.

The Nobel committee noted that since the launch of the newspaper, six of its journalists have been killed, among them Anna Politkovskaya, who covered Russia’s bloody conflict in Chechnya.

“We can congratulate Dmitry Muratov — he has consistently worked in accordance with his ideals, he has adhered to his ideals,” Peskov said in a conference call with reporters.

Moscow-based political analyst Abbas Gallyamov said the award marked “a painful strike to the Russian authorities … because the freedom of speech and the principles of independent journalism are an evil in the eyes of Russian authorities.”

Some critics questioned if the award respected Swedish inventor Alfred Nobel’s will and its original purpose to prevent war, but Dan Smith, director of the Stockholm International Peace Research Institute, said it was justified.

“Freedom of expression is a part of democracy, and democratic systems are proven to be more stable, less likely to go to war with each other, less likely to experience civil war,” Smith said.

Reiss-Andersen noted that the peace prize has gone to journalists before, including Ernesto Teodoro Moneta of Italy in 1907 for promoting pacifism and Carl von Ossietzky of Germany in 1935 after revealing the Nazi regime was secretly rearming in breach of the First World War peace accord.

Reiss-Andersen also noted the risks to free speech in today’s world because of the spread of fake news.

“Joy because this is an extraordinary tribute to journalism, an excellent tribute to all journalists who take risks everywhere around the world to defend the right to information,” the group’s director Christophe Deloire said from its Paris headquarters. “And also urgency because it will be a decisive decade for journalism. Journalism is in danger, journalism is weakened, journalism is threatened. Democracies are weakened by disinformation, by rumours, by hate speech.”

The group, known by its French acronym RSF, has worked with Ressa and Muratov to defend journalism in their countries, and comes under regular criticism from authoritarian governments.

“This prize is a great signal a very powerful message to defend journalism everywhere,” it said.

After the announcement, the Nobel committee itself was put on the spot by a reporter who asked about its decision to award the 2019 peace prize to Ethiopian Prime Minister Abiy Ahmed, who has since become entangled in a domestic conflict with the powerful Tigray region.

“I will not comment on other Nobel laureates and other issues than we have on the table today, but I can mention that the situation for freedom of press in Ethiopia is very far from ideal and is facing severe restrictions,” Reiss-Andersen said.

The prestigious award comes with a gold medal and 10 million Swedish kronor (more than $1.44 million Cdn). The prize money comes from a bequest left by the prize’s creator, Swedish inventor Alfred Nobel, who died in 1896.

Still to come Monday is the prize for outstanding work in the field of economics.