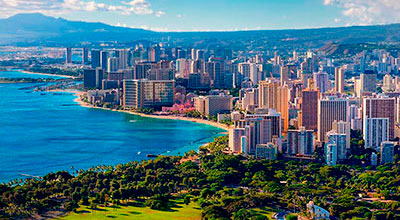 California lawmakers are reportedly descending on a week-long policy conference in Hawaii as the Golden State urges its citizens to refrain from travel and indoor gatherings.

According to the San Francisco Chronicle, the Independent Voter Project (IVP), which is hosting the conference, declined to name the fewer than 20 lawmakers, who collectively came from California, Texas, and Washington.

The conference is taking place at the Fairmont Kea Lani in Maui, where rooms reportedly run $600 and over per night, with policy discussions and “schmoozing” with corporate sponsors, the Chronicle said Monday. Its website says the event is four days long and the purpose “is to provide a setting, away from the Capitol, for elected officials and a diverse group of industry experts to consider policy matters in a nonpartisan manner.”

News of the event came just days after the California Department of Public Health issued a travel advisory, urging residents to stay home and not to leave their “region.”

“Californians are encouraged to stay home or in their region and avoid non-essential travel to other states or countries,” reads the advisory from Friday. “Avoiding travel can reduce the risk of virus transmission and bringing the virus back to California.” It also recommends people returning to California to quarantine for 14 days after arrival.

The project reportedly paid for guests’ five-night stay at the Fairmont, as well as $550 for airfare.

While details are unclear, the Sacramento Bee reported on a conference in 2015, noting: “Ditching suits and ties for shorts and polos, attendees rotate through morning panels covering subjects such as drug buyback programs and the digital divide in poor households. Hawaiian shirts are in disappointingly short supply. During open afternoons, they are free to relax and explore the island, often with spouses and children who have tagged along for the week.”

Jack Pitney, a Claremont McKenna professor, said at the time that “nobody thinks you’re going to Maui to learn things.”

Chairman and Executive Director of the IVP Dan Howle said the event was about a third of its usual size and that it was taking advantage of Hawaii’s “very detailed, safe travel program.”

He also claimed that IVP was “bending over backwards to make sure there’s every conceivable safety protocol.”

He added: “We’ve been really careful. We didn’t make the final decision to do this until the state had a program to reopen.” Participants will reportedly have to download an app that traces their movements.

The Hawaii conference was just the latest to raise questions about how politicians spent their time while directing citizens to isolate themselves. For example, Gov. Gavin Newsom came under fire after attending a dinner party with his wife on Nov. 6. The gathering included at least a dozen people and took place at an upscale restaurant in Napa Valley.

A Sacramento Bee editorial blasted the decision. “[T]his is a bad look for an elected official at any time, but especially during a pandemic that has claimed more than 18,000 lives in California and devastated the state’s economy”  in addition to the fact that the dinner was in honor of a lobbyist.

Newsom and state and local health officials have urged people to stay within their own households. If people must visit others, they should meet outside, include no more than three households, wear masks, stay socially distant and limit their interaction to two hours.

“While our family followed the restaurant’s health protocols and took safety precautions, we should have modeled better behavior and not joined the dinner,” he said in a statement.