I wanted a real NYC bagel. Was it worth it to get two dozen shipped across the country? 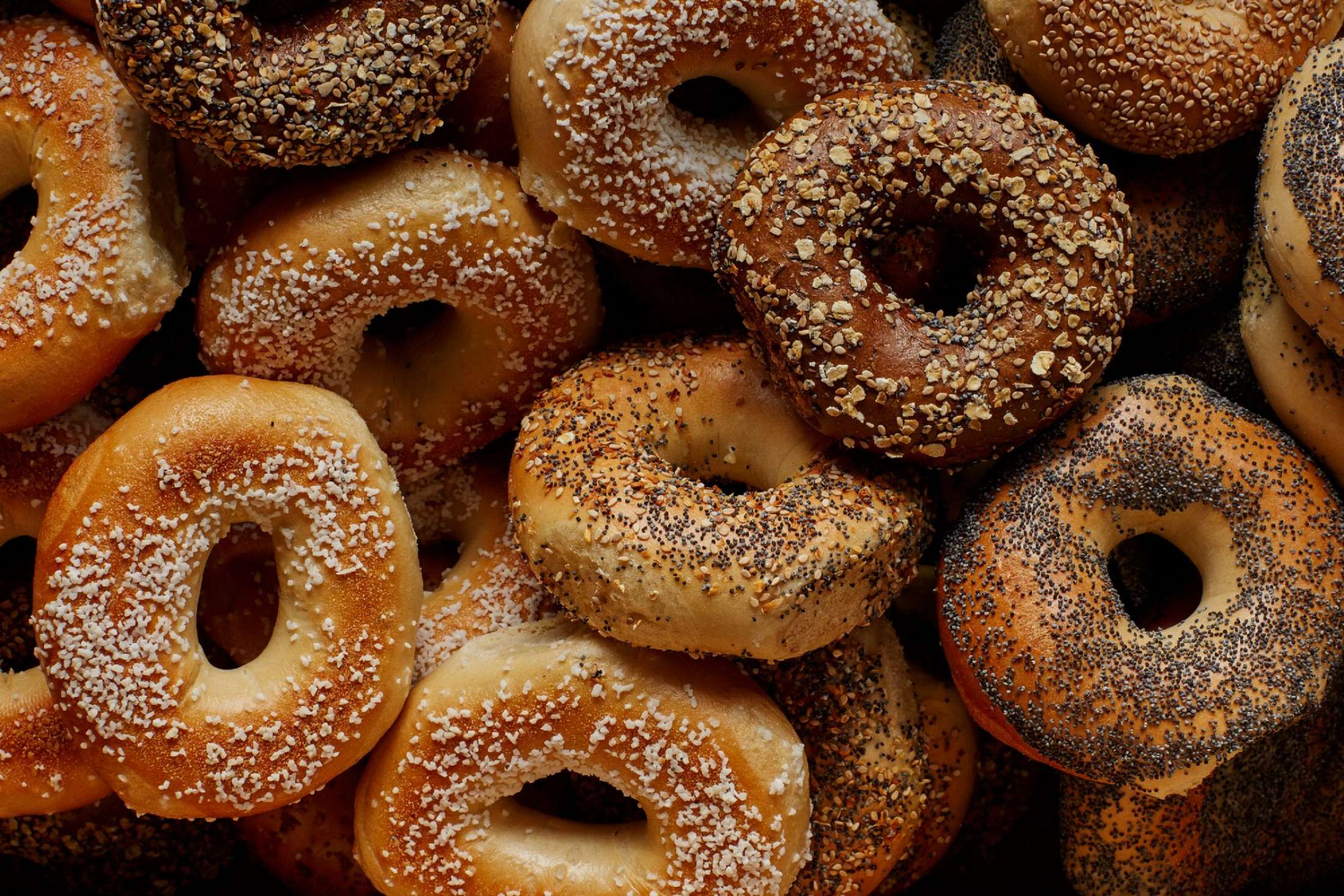 Like so many stuck at home these days, I sincerely miss travel. For the past several months, I’ve dreamt of visiting a city outside of the Bay Area, hoping to immerse myself in a new setting. Among the places I have missed most has been, without a doubt, New York City.

The last time I visited Manhattan was a few years ago, and each time I’ve gone, it’s been one food adventure after another. So after months of feeling restless, I decided if I couldn’t be in New York physically, I could at least sample it from afar. For me, that meant one thing: ordering a large shipment of bagels.

When I discovered the roster of East Coast restaurants available on online marketplace GoldBelly, I knew that I couldn’t turn away without ordering from two New York City institutions: H&H Bagels and Kossar’s Bagels and Bialys.

I had many options to choose from, but I decided on Kossar’s and H&H for a couple of reasons. First, it was the notoriety. For the uninitiated, Kossar’s has been around since 1936 and is known for its old-world baking style that includes bialys, a Jewish Polish bread. Similarly, H&H Bagels has been a New York fixture since 1972 and has famously been cited on “Seinfeld” and “Sex and the City,” among others.

After a couple of colleagues recommended them separately, I knew I had found the right ones. The next thing was the price. One of the things I wanted to keep in mind was selecting an option that included free shipping (in the case of another New York shop, shipping was $55 alone) that didn’t require ordering an insane amount of bagels.

For $44, Kossar’s let me select four of 12 flavors, while H&H Bagels let me pick two of 11 different varieties priced at $49. I made sure to pick plain and sesame bagels from both shops, plus everything and onion bagels at Kossar’s. Two dozen bagels later, I was looking at a grand total of $93.

Let me be frank. I didn’t set out to prove that New York bagels are better than the slew of options around the Bay Area. Bagel purists will argue that you can’t find decent bagels anywhere outside New York, but many local shops are up for the challenge. Saul’s Restaurant and Delicatessen recently began to debut fresh bagels on its menu, while the popularMidnite Bagel pays homage to the region by offering sourdough options.

My primary mission was to re-create the moment I was first introduced to the New York City bagel scene.

Five years ago, I visited New York one particularly snowy winter to attend a job fair that was ultimately canceled after the city suspended subway service in preparation for what it believed would be the worst blizzard in its history. Maybe it was naiveté, but I decided that not even a snowstorm would get in the way of having a decent meal, so I put on my snow boots and headed to the decades-old Russ & Daughter for lunch.

It was just four blocks, but it felt like an expedition getting there as shards of snow kept stinging my eyes, but finally, I got my hands on a coveted warm lox bagel and took my first bite. As my entry point into bagel culture, I was hooked. Since then, I’ve tried Ess-a-Bagel and even that rainbow bagel from Brooklyn’s The Bagel Store, which proclaims itself as, “The Bagel That Broke The Internet.”

Back in the Bay Area, what I most wanted to know was whether trying NYC bagels in the comfort of my own home would give me the feeling I had so many years ago. Would they taste just as good here?

A couple of days later, the shipment arrived on my doorstep in two separate packages. It took no time to unbox and prepare a decadent sandwich with lox, cream cheese, red onion, and capers (items not included in the shipment). After I finished, I can attest that both lived up to the hype.

Despite the cross-country trek, each bagel preserved its freshness much to my surprise. Sure, they didn’t compare to a freshly-baked bagel, but I was amazed to find that both options still had a soft interior and crunchy crust once toasted. They certainly weren’t the average store-bought bagel that tasted like cardboard.

“Everyone says it’s the New York water and there’s no arguing on that,” Sharon Bain, manager at Kossar’s, said with a laugh over the phone. “We cannot fight that New York water does it for us. It’s like San Francisco’s sourdough. Every region has its own special something.”

While there is some truth to the long-standing adage that New York bagels are great due to city tap water, it certainly isn’t the definitive reason for why they have the “it” factor. The American Chemical Societypoints out that low levels of calcium and magnesium in New York City water can make bagels softer, but the effect is only minor. What makes a bigger difference is the rest time between boiling.

The skilled bakers at Kossar’s hand roll bagels each day and then place them into a fridge to rest overnight. The following morning, each bagel is toss into a kettle of boiling New York water, and then bake to perfection. Bain shared that orders made on GoldBelly are prepared at Kossar’s as soon as it is placed.

“We bake what we ship and that’s prepared separately from our in-store bagels,” Bain said. “You have that attention to quality that we’re looking to maintain as with everything else that we do.”

It’s no different at H&H Bagels. Darin Dolfi, director of wholesale operations at H&H Bagels, shared that once orders are placed, the company prepare them on-site and ship overnight.

Dolfi said that H&H Bagels use five ingredients for its dough that, once formed, is placed in a proof box to activate the yeast. The dough is stored in a refrigerator to ferment for 24 hours before it’s baked the following day.

“When we put them into the hot water, it gives [the bagels] that nice crusty exterior and shiny coat,” Dolfi said. “Once they come out the kettle, we put them in cold water so that the bakers can actually handle them. Then we put them on a burlap board and right into the oven.”

When I received the shipment, I offered some to an SFGATE colleague who grew up on the East Coast. He happens to be a bagel aficionado and even makes his own bagels right at home. Days later, he confirmed that Kossar’s and H&H were “really solid bagels” and were also “pretty dense,” which is a great thing to have.

Visually, H&H Bagels were slightly thinner compared to the rounder ones at Kossar’s. That’s due in part because H&H uses a uniform machine to shape the bagels after the dough is formed and cut by hand. My colleague pointed out that he preferred Kossar’s bagels for the crunchier crust and homemade taste. Though, he added that the toppings served on H&H bagels stayed in place better.

If you make an order online and have them shipped cross country like me, Dolfi suggests storing the bagels in the freezer for up to a year if you don’t plan to eat them right away. He also clarified that there’s no need to pre-slice them before storing in the freezer — a common debate I kept coming across.

“There’s nothing wrong with that at all, we just like to optimize the freshness,” Dolfi said. “So, the best way is to just store as a whole and when you’re ready, pull them out of the freezer, [let them thaw], and then toast to your liking.”

When it came to asking about the most popular schmear, Dolfi and Bain agreed that the traditional plain, veggie and scallion schmears were top choices at both H&H Bagels and Kossar’s. Despite Kossar’s traditional background, Bain said that it also dabbles with a variety of jalapeño caper, garlic thyme, and everything bagel cream cheese options.

Each bagel stood out in its own right. For me, the marker of a great bagel is if it has a discernible softness, and these bagels absolutely did. Also, there’s something wonderful about trying a product from a business that’s been around for decades. But I wanted to know why Dolfi and Bain believed New York bagels were so iconic.

“I think for us, what makes our bagels really just known is that we’ve been around for over 50 years. We make our bagels for the same love and care that we have made since 1972,” Dolfi said.

Besides the New York City water, Bain thinks that NYC bagels are a thing of legend. She said that the indicator of a great product has been all the compliments Kossar’s has received through the years.

“I’ll tell you, not a single day goes by without a customer telling you, ‘I was here when I was a kid’ or ‘I was here 40 years ago.’” said Bain.

The popularity of the two institutions even inspired Emily Winston to open Boichik Bagels in Berkeley last year after moving from the East Coast. In 2019, Winston told SFGATE that she wanted to re-create bagels from her childhood and that after H&H Bagels closed its original location in 2011, she made it her “personal mission to re-create that bagel from memory.”

Upon opening the shop, the menu also included a bialy fashioned after Kossar’s very own, Eater wrote.

Before I got off the phone with Bain and Dolfi, I asked if either had tried Bay Area bagels before, but both admitted that they had not. After a short pause, Bain said that now that I had presented this to her, she would make an effort to try one soon.

“It’s the weirdest thing, I’ve never stopped to have a bagel in California,” Bain shared. “So, I’ve got to try one now.”

Never before have I eaten so many bagels in such a short amount of time. After some minor skepticism, I found that having bagels shipped from New York was well worth the investment. Initially, I thought they would lose their luster given the 2,000-plus mile journey to my doorstep, but the bagels were much fresher than I imagined. Also, having access to New York food amid a global pandemic made it even more worthwhile.

Up until recently, Californians were not allowed to visit New York without first being required to self-quarantine for 14 days. That’s no longer the case after California was removed from New York’s COVID-19 travel advisory list.

And that’s great news for me. I, for one, look forward to visiting New York sometime soon with the intention to have Kossar’s and H&H Bagels once more — this time not from a box shipped across the country.