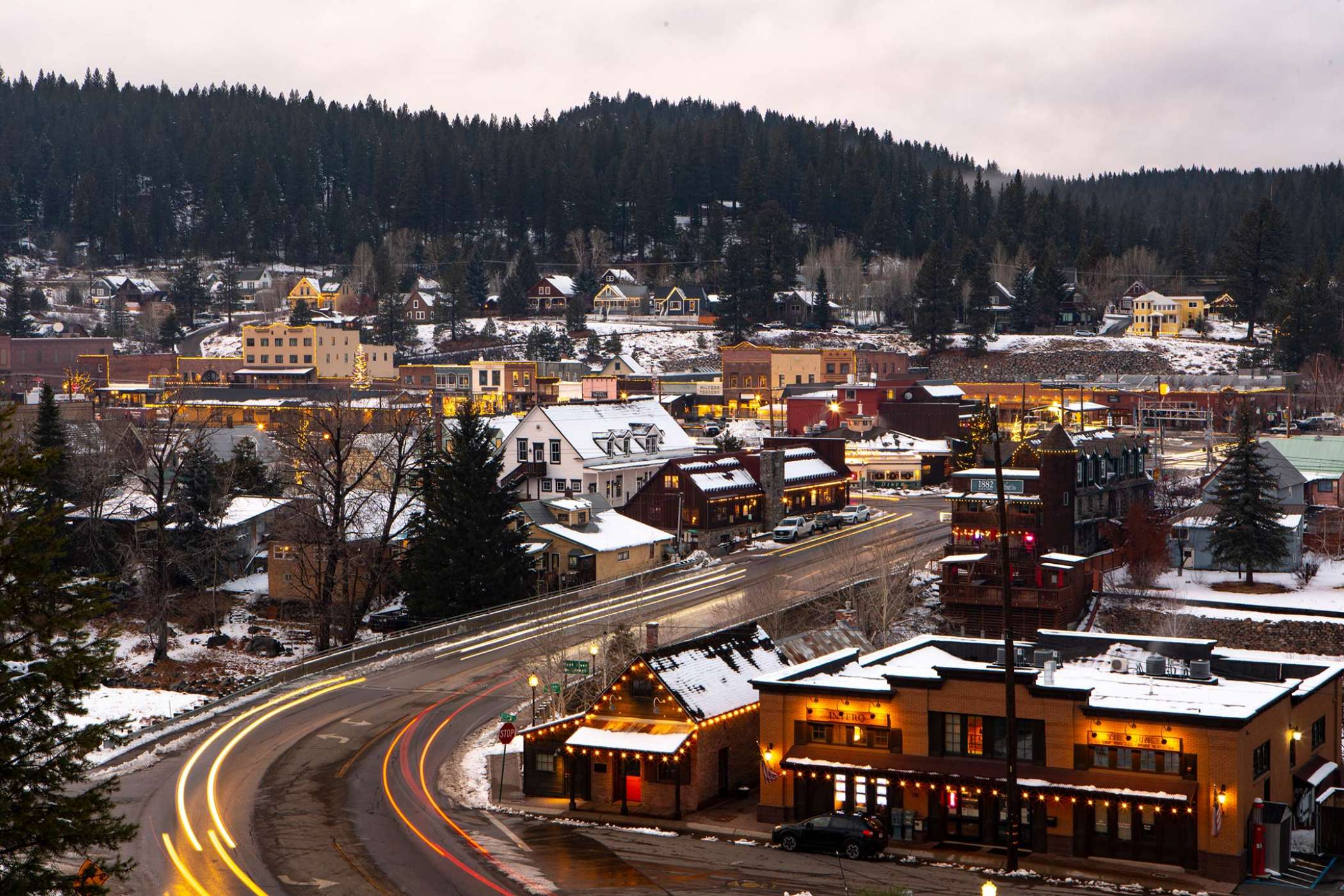 Restaurant Trokay is an upscale “modernist” establishment in downtown Truckee. Their food is complex and intentional. Their platings are detailed and artful. The cost to dine there can push $200 to $300.

As restaurants across California pivot for survival, in Truckee, the timing of the shutdown couldn’t be worse. The week of Christmas and New Year’s is the busiest of the year, and restaurants cannot host patrons inside or outside. All they can do is serve to-go orders.

The days between Christmas and New Year’s account for 10% of Trokay’s annual sales, said chef John Weatherson, who co-owns Trokay with his wife, Nyna, also an accomplished chef at the restaurant. He says there’s no way Trokay can make up for the loss they’re anticipating this year.

“Summertime is a marathon,” Weatherson said in a phone interview on Tuesday. “Christmas is a wind sprint.”

At Trokay, the cost of rent is built into a business model that factors how many plates can be served and how many tables can be set. Now, Weatherson can’t use any of the square footage in his restaurant to generate business. There’s no way the math adds up, he says.

“There’s a tremendous, tremendous amount of loss right now,” Weatherson said. Their landlord has already forgiven and deferred part of the rent for this year. Depending on how long the shutdown lasts, Weatherson said they’re prepared to take on more debt and ask for more rent forgiveness. “We’ll just have to cross those bridges when we get there,” he said.

In the meantime, the Weathersons are figuring out another solution to a seemingly impossible problem for the holidays: How do you serve a roasted chicken in a to-go container and still adhere to the culinary perfection that Trokay is known for? The Weathersons and their sous-chef have spent two months trying to figure out how to cook a protein just right, so that a patron can take it home, pop it in the oven at 350 degrees and have it come out exactly as if it were served at the restaurant.

“We solved that problem,” Weatherson said. “The solution, just like everything at Trokay, was at the intersection of science and magic, but we absolutely solved it. I feel 100% confident that I could hand you a cooked chicken and you could put it in your 350-degree oven for 15 to 20 minutes and the skin would be crispy. It would be the juiciest, most incredible chicken you’ve ever tasted in your life. I can tell you that because we’ve tested it profusely.”

In addition to figuring out the chicken, they also found to-go containers that allow them to plate as they would at their restaurant. The containers have square plates and a tall dome-like lid.

“All of our platings involve visual interests,” Weatherson said. “We need height. We need angulation. We need context, a canvas with which to paint.”

That’s how Trokay will be serving their holiday dinners over the coming weeks. Their takeout menu serves meals that feed 4 to 6 people with prices for protein plates ranging from $83 to $290.

Trokay isn’t the only Truckee restaurant innovating in desperate times.

Alibi Ale Works is a craft brewery down the street that is a popular hangout spot for community gatherings. Seeing as gatherings aren’t happening right now, Alibi pivoted. Thirteen of their draft brews are now being canned, says Rylan Cordova, general manager of Alibi’s Truckee brewpub. Cordova also expanded the menu with tasty items suited for grab-and-go, like a portobello mushroom sandwich, spicy chicken lettuce wraps and a mac-and-cheese dish.

“I think we’re a lot more set up for success now than we were the first shutdown, but it’s still going to be pretty tough,” Cordova said in an interview on Wednesday. He expects business to drop 70% over the holidays because of the shutdown. “Those two weeks are traditionally the busiest two weeks of our entire year.”

At Moody’s Bistro Bar & Beats, owner JJ Morgan opened a market for customers to purchase gourmet goods like pre-batched cocktails, charcuterie and bottles of wine. Those items are available in addition to a full to-go menu. “[The market] is not going, like, gangbusters, but it’s definitely helping,” Morgan said. “It’s getting people to know that we have it.”

Christmas and New Years are the busiest 10 days of the year, Morgan says. The shutdown is hurting Moody’s, a lot.

“All of us in the restaurant business in Truckee are just asking for the community to support us through this, like they have been doing,” Morgan said. “To-go food from all of the restaurants are what give us the chance to make it to the other side.”

Established in 1998, Pianeta Ristorante is one of the longest running restaurants in downtown Truckee. They’ve had to constantly pivot and adapt as the pandemic has evolved, says Thomas Beckering, one of Pianeta’s co-owners. This summer, the restaurant spent approximately $30,000 from a grant with the town of Truckee to build an outdoor patio. They also invested in heaters and fire-pit tables, so they could continue seating outdoors through the winter — but their investment isn’t going to bring in the returns they hoped for, at least for the next few weeks. While outdoor dining is prohibited, Pianeta is only open for to-go orders. Guests can still sit outside with their takeout, if they’d like, Beckering said.

“We’re allowing people to order and then they can take their food and they can sit down on the patios,” Beckering said. “We’re calling them 100% self service.”

The town of Truckee received $400,000 in CARES money to start a grant program for restaurants. The town also contributed $100,000 to the grant. The money was used to create a “winter wonderland” dining experience outdoors.

“And that can’t happen anymore,” said Jennifer Callaway, town manager, “which is heartbreaking for our community.”

One of the most challenging aspects of the second shutdown is that, with the transition to takeout, there aren’t many shifts for restaurant employees. Cordova had to lay off most of his staff at Alibi, but he said many of his employees also work at ski resorts, which will help tide them over. One thing that would help them: a stimulus package from the federal government that could be coming through at the last minute.

Pianeta staffed down to one front-of-the-house shift for to-go orders, Beckering said. That’s enough for just a couple of servers to stay on payroll. The rest are collecting unemployment. Some may look for other work, but other employees are leaning on savings from a summer that was nonstop busy to carry them through, he said.

“It’s gut-wrenching. I feel for all my employees. They’re struggling right now,” Beckering said. If Pianeta loses employees, Beckering said another crux moment will come when it’s time to reopen and having to find new staff. With such a high cost of living, Truckee’s workforce is limited and stretched.

Like Pianeta, Trokay’s staff is small and tight-knit. Weatherson said many of their staff are leaning on savings from the summer. Getting through this time is going to require patience and resilience, he said. And Trokay has seen its fair share of challenges. The restaurant has been open for nearly 8 years and has already been through droughts and wildfires. The pandemic has been the most recent hurdle in the challenges of owning a restaurant, a business that has especially thin margins in a resort town with long slow periods between the busy weeks.

Still, Weatherson says there’s no place he’d rather be than Truckee. He walks through the woods on his way to work and his kids ski 70 to 80 days a winter.

“As soon as indoor dining can resume, like that’s when things can become financially more liquid and more lucrative and that will be fine,” Weatherson said. “But I’m really thankful that we own a restaurant here and not somewhere else during the pandemic.”