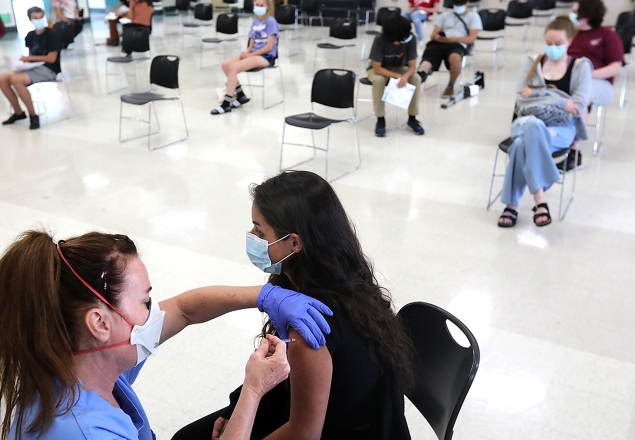 California’s COVID-19 data collection — a tally of infections, hospitalizations and deaths — is an essential tool in fighting the pandemic. But it paints only part of the picture.

The California Department of Public Health, however, is now engaged in an ambitious study aimed at beefing up its COVID-19 database by determining the percentage of Californians who carry antibodies against the virus — and whether these antibodies were acquired by infection or vaccination.

State health officials and researchers say the study will produce one of the world’s most accurate snapshots of immunity to the virus in a large and diverse population.

CalScope is using a $5 million grant from the U.S. Centers for Disease Control and Prevention to test the blood of at least 30,000 California households for antibodies against SARS-CoV-2, the virus that causes COVID-19.

“We’re all very hot on following vaccination coverage, but natural immunity in the absence of vaccination is difficult to discern from routinely collected data,” said Dr. George Rutherford, a professor of epidemiology at UC San Francisco. “That’s where CalScope comes in.”

The study is also unusual because it’s using blood samples obtained from pinpricks done at home as opposed to blood draws at health clinics and  hospitals.

“The use of dried blood spots collected from a highly representative sample of California’s citizens in their homes adds to the novelty and eliminates the bias that distorts the results of most other surveys that rely on people having to go to phlebotomy sites,” Seftel said.

Seeking random samples to ensure that the data is statistically sound, the study will ultimately send out at least 600,000 invitations to participate to households in seven counties: Monterey, Alameda, El Dorado, Kern, Los Angeles, San Diego and Shasta.

Health officials hope that the survey will pinpoint which parts of California have been most affected by the coronavirus’ spread — and what areas are likely to be hit next.

The recent emergence of the omicron variant is not expected to affect the project because “the antibody tests used in CalScope measure antibody response to vaccination or COVID-19 infection, regardless of variant type,” the Department of Public Health said in a statement to the Sentinel.

Breaking the study into three distinct phases will allow scientists to observe how antibody prevalence changes over time, as well as offering snapshots of who’s been vaccinated, infected or both.

The first-phase testing was done last spring. It found that 68% of adults and 44% of children in the more than 11,000 California households tested had antibodies.

Of the adults, 41% had antibodies from vaccination only, 18% from infection only and 9% from both vaccination and infection based on self-reported vaccination data. For children 17 and younger, the figures were 13%, 26% and 5%, respectively.

The second phase is now underway, and the state plans to begin the third phase this spring.

To get a rich portrait of the virus’ impact on the population, an algorithm selects households of diverse demographics, occupations and COVID-19 safety practices. The department then sends out postcards to the selected homes, seeking the written consent of residents willing to participate in the study.

Enable Biosciences processes the blood samples and forwards the data to the Department of Public Health for analysis.

Seftel said that the use of his company’s highly accurate antibody test is “distinct from others in a universe of poorer accuracy antibody tests.” Because the CalScope test doesn’t involve “more invasive and less accessible blood draws,” he said, it is designed to “reach and test communities of color that have thus far been underrepresented.”

Still, non-Hispanic white were greatly overrepresented in the first phase of the study. The 2020 Census found that they made up 36.5% of California’s population. But they represented 63% of those who participated in the study’s first phase. Latinos now make up nearly 40% of California’s population, but their participation rate in phase one was only 15%.

In an emailed response, the Department of Public Health said it has “partnered with the counties and community-based organizations to try and help improve enrollment of underrepresented groups.”

Karen Smith, spokeswoman for the Monterey County Department of Health, was one of county residents randomly selected to receive an invitation to participate in the first phase of the study.

Smith said the postcard provided instructions for how to consent to the study and fill out a 20-minute survey online. The state Department of Public Health then followed up by sending a test kit for up to one adult and one child per household, she said.

“I’ve been impressed with the way (the process) has been handled,” Smith said.

The letter and the online resources were clear, she said, and someone from CalScope emailed back answers to her questions about the online survey within six hours.

There are perks for those who participate, Smith said. Not only will they learn if they have antibodies against the coronavirus three to four weeks after sending in their test kits, but participants will also get $40 gift cards for joining the study: $20 for completing the survey and $20 for sending in a sample.

Peter Robinson, one of the cofounders of Enable Biosciences, strongly urged Californians to participate in the study if they are invited.

“It is such a critical dataset,” he said, “not just for California, but for the nation and for the world.”