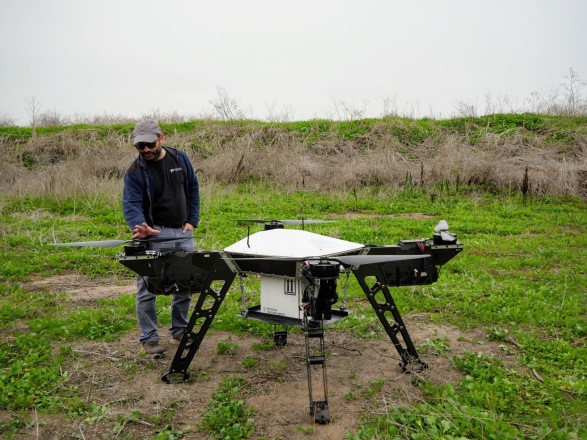 Nestled amidst cypress trees and a blanket of thick coastal fog lies an inconspicuous workshop where Parallel Flight drones are being tinkered with and tested. The “Firefly” — weighing 120 pounds — looks only faintly like its hobbyist cousins and more resembles a small aircraft.

It stands roughly 3 feet tall and has a more than 5-foot wingspan. And here, form is function. The startup’s drones are specialized to transport heavy loads: firefighting supplies, industrial packages and even human organs for transplants.

“Drones are going to get bigger and we’re leading the way,” said Parallel Flight Technologies CEO Joshua Resnick. “We’re building something that’s an autonomous workhorse, that can actually carry big stuff around.”

Helicopters and aircraft have long been used to fight wildfires and ferry crews to remote locations. But those resources are expensive, often in high demand during peak fire season, and can be limited by bad visibility. Parallel Flight aims to fill that gap.

“What we don’t have are essentially pickup trucks of the sky,” Resnick said. “We don’t have workhorses that can bring supplies to firefighters on the front lines or drop off payloads to do controlled burns, and we don’t have drones that can put small fires out.

Parallel Flight drones are equipped to fly from two to seven hours continuously. Most other industrial drones on the market take to the sky for 15 minutes to an hour.

That, combined with the Firefly’s four propellers and hybrid fuel and electric power system, means it can reach speeds from 60 to 100 mph and carry up to 100 pounds over longer distances compared to competitors, Resnick said.

Another specialty of the long-distance drone? Scaling up prescribed burns.

Those intentionally lit fires — a practice established by Indigenous peoples millennia ago — reduce wildfire risk and provide ecological benefits to plant communities. The Firefly will be able to set 1,000 to 4,000 acres of land on fire in a single flight, according to Resnick. Drones in the sky now lighting prescribed burns only fly for about 10 minutes.

The company also plans to use its drones for industrial and shipping operations. Resnick spoke of the drones aiding in construction of wind turbines, carrying heavy magnets to map aquifers, dropping off packages to remote Arctic villages and supplying rural areas with crucial medical equipment.

Parallel Flight has institutional backing, too.

The U.S. Department of Agriculture, the Forest Service’s parent agency, has supplied the company with $750,000 in grants. The National Science Foundation and NASA have also put up cash to fund the startup’s research.

The idea for Parallel Flight ignited in 2017, when the Tubbs Fire devastated parts of Santa Rosa. Later that year, the Bear Fire erupted in Boulder Creek, close to Resnick’s home.

“I had friends in Santa Rosa who lost their homes. Then we had a smaller fire in Boulder Creek,” Resnick said. “My house is in the Santa Cruz Mountains, not too far from there … so that was kind of a wake-up call.”

Firefighting agencies such as Cal Fire and the Forest Service already send drones into the sky to scout smoke and monitor fire behavior.

But Resnick, who co-founded the company with David Adams and Bobby Hulter, discovered no one was flying drones to aid wildland firefighters with supply drops.

That’s largely because many drones can’t go the distance when it comes to enough battery life and ferrying supplies. Parallel Flight aims to aid wildland firefighters by delivering tools, such as chainsaws and fuel, in remote locations.

“If you get a hot meal or a fresh sandwich, if you don’t have to hike as far to get your supplies … this all makes the firefighters more efficient, increases their stamina and makes them safer,” Resnick said.

Maxing out its carrying capacity at 100 pounds, the drone can complete a two-and-a-half-hour flight. But the company plans to build out drones that can hold up to 1,000 pounds of gear.

Parallel Flight sits on a campus shared with private school Monterey Bay Academy, where acres of empty fields stretch out to meet the coast. It’s perfect flying grounds for drones.

The aircraft is preprogrammed to travel certain distances and hit targets on a flight course. But when it comes to actually piloting, the drone can do that by itself.

“When you’re tuning the aircraft, it’s almost like a baby is learning to walk,” Resnick said. “It has a lot to learn before it can actually control those muscles. Then once it knows how to walk, you can take a step back and say, ‘Just follow this path’.”

Inside the Firefly, hundreds of sensors alert the drone’s computer to what’s happening in the airspace it is flying through. The computer then takes that information — air pressure, temperature, acceleration data — and adjusts accordingly.

Resnick and the team are pushing the drone’s limits, before Firefly rolls out to its first customers sometime this year.

Drones have already been sent into airspace to light prescribed burns. These aircraft deploy so-called “dragon eggs” — containing potassium permanganate — that ignite when injected with coolant.

But those flights are short-lasting. Prescribed burns performed in helicopters have turned deadly and can be imprecise in targeting specific types of vegetation.

A Parallel Flight drone can carry 4,000 dragon eggs, according to Resnick, whereas drones currently lighting prescribed fires only take 400 on board. The Firefly will be able to ignite upward of 2,000 acres in a trip, depending on vegetation dryness and equipment weight.

Currently, the company produces about a drone a month, Resnick said.

But how quickly the aircraft will become standardized in the wildland firefighting and land management worlds remains to be seen.

Fireflies taking flight to complete industrial jobs, Resnick predicts, will happen in the nearer term, since most workers in those industries don’t face the same dangers firefighters do.

But the company’s mission to address increasing wildfire risk remains front and center.