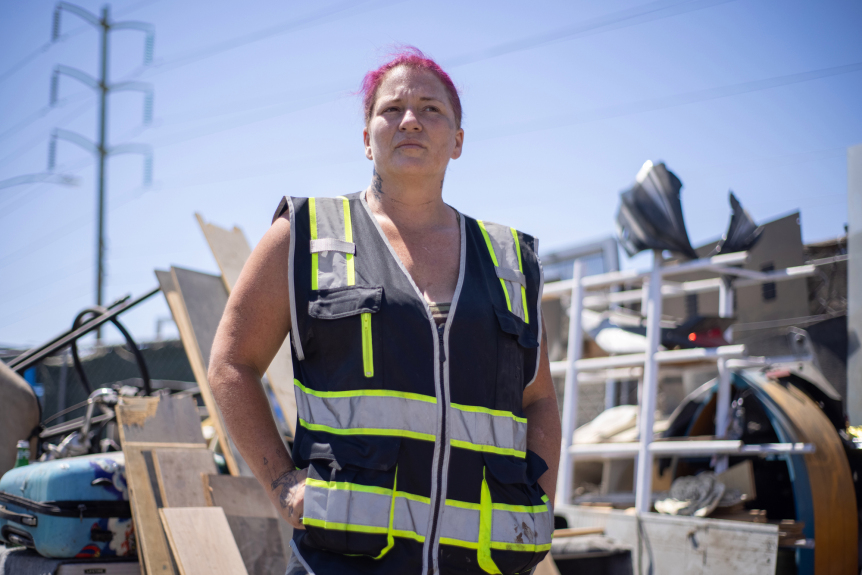 Apple promised to help quell the Bay Area’s homelessness crisis with a series of big-ticket investments, but the tech giant soon may have to get more directly involved — addressing a problem that has spread to the company’s front door.

A large homeless encampment is growing on the site Apple earmarked for its North San Jose campus, two years after Apple made waves with a $2.5 billion pledge to combat the Bay Area’s affordable housing and homelessness crisis.

What started as a few RVs parked on the side of Component Drive has grown over the past year into a sprawling camp of dozens of people, a maze of broken-down vehicles and a massive amount of trash scattered across the vacant, Apple-owned property. People with nowhere else to go live there in tents, RVs and wooden structures they built themselves. At least two children call the camp home.

Apple is trying to figure out what to do, but it’s a tough situation. Clearing the camp likely will be difficult both logistically — it’s more challenging to remove structures and vehicles that don’t run than tents — and ethically — there are few places for the displaced residents to go.

“There are approximately 30-35 unhoused people living in the area with an estimated 200 tons of hazardous trash and debris on the private property, making this a complicated and challenging situation,” Daniel Lazo, spokesman for the city of San Jose’s department of Parks, Recreation and Neighborhood Services, wrote in an email. “There are also an estimated 65-75 operable and inoperable vehicles at the site.”

Residents of the camp say there may be as many as 75 people living there.

Apple is “in talks with the city on a solution,” company spokeswoman Chloe Sanchez Sweet wrote in an email, without providing additional details.

The number of people living without homes in the region has grown dramatically in recent years — it’s estimated there are about 30,000 homeless people in the five-county Bay Area. The crisis has become even more noticeable during the COVID-19 pandemic, as cities cut back on clearing encampments, allowing unhoused people to shelter in place and camps to grow and become more entrenched.

As the problem intensifies, local tech companies — some of the region’s main generators of jobs and wealth — have felt mounting pressure to intervene. Google and Facebook each pledged $1 billion to fight the housing shortage and homelessness in 2019, and Apple followed by committing $2.5 billion.

The vacant land off Component Drive figured into Apple’s $2.5 billion commitment.  Apple originally bought the land in a push to acquire real estate in North San Jose for a new tech campus, but so far, the company hasn’t done much to develop it. In 2019, the tech company promised to make $300 million of land it owns in San Jose available for new affordable housing — including a portion of the Component Drive property.

For Tigs Smith, who has been living on Apple’s land for the past year, the tech company’s promises mean little when they do nothing to help her or her neighbors. Smith, a 40-year-old construction worker, lives in a tiny, one-room house she built herself on the Component Drive property — where she landed after her ex-boyfriend kicked her out of the home they shared. She recently moved her 16-year-old daughter and nine-year-old son into the tiny home with her.

Now, Smith hopes Apple will do something to help.

Apple already has committed $50 million over five years to help San Jose-based Destination: Home reduce and prevent homelessness. So far the organization has used some of that money — plus $50 million from Cisco — to finance nearly 2,000 new units of housing for people who are homeless or at risk of becoming homeless.

That money also has funded a new online portal, set to launch next spring, that will help unhoused people track the status of their requests for housing help. And it helped the county expand its homelessness prevention system to serve 1,500 households per year, according to Destination: Home.

But those efforts won’t necessarily help Smith and her neighbors.

“My bet is that Apple will not want to be the private company that chases the homeless out,” he said.

Meanwhile, San Jose is gearing up to clear a much larger camp at West Hedding and Spring streets, near the San Jose airport. That clean-up, which comes at the behest of the Federal Aviation Administration, could displace more than 200 people — some of whom might move to the Apple camp or other nearby camps.

In an attempt to shelter some of those people, city officials have proposed creating a new modular interim housing site near the San Jose Police Department headquarters on West Mission Street. The City Council is set to consider the proposal next month.

Relocating people living in the Apple camp “will understandably create stress for many residents,” Lazo wrote. “It is important to City staff that the process be handled with compassion and respect for the people displaced.”