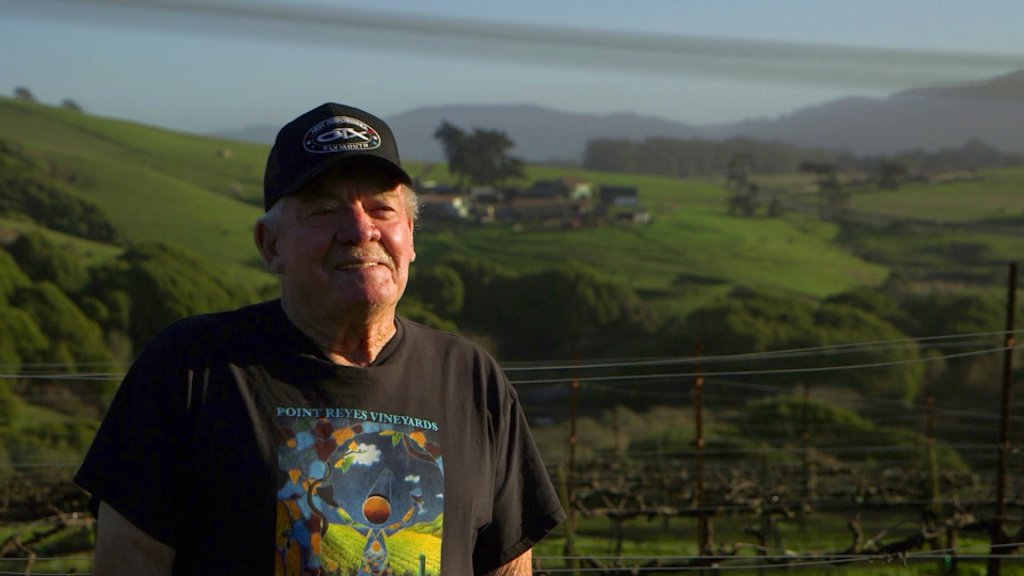 From an agricultural perspective, the verdant, coastal hills of Point Reyes in west Marin County are generally known as cow country. Cloaked by fog much of the year, the patchwork of grassy lands yield dairies along with a smattering of small organic produce farms.

But farmer Steve Doughty believes someday soon, the changing weather patterns will transform the coastal area into something else: grape country. He’s already pushing the frontiers of what nature will allow, growing pinot noir and chardonnay grapes on a scenic hill to produce his own sparkling wine.

“I stumbled onto it accidentally, but it’s worked,” Doughty said, taking in the vast view, which includes his property’s three small vineyards.

Doughty, a retired construction worker, initially planted the vineyards not to break into the wine business but to increase the value of his property when the National Park Service showed interest in purchasing the land. When the deal went south, Doughty found himself a winemaker, peddling his wines from the tasting room of his Point Reyes Vineyards – a lone winemaker among the quiet terrain of bovine and tourists.

“We just sell locally to restaurants and a few stores,” Doughty said, popping the cork on a bottle of his sparkling pinot.

Right now, the colder climate doesn’t allow for Doughty’s grapes to fully ripen, which suits his French method of making sparkling wine from grapes that don’t reach full term. But Doughty believes natures rules of winemaking will change as climate change warms the area. From his hilly lookout, he sees a lot less fog than he did even five years ago. And he’s noticed the weather has recently warmed enough that his vineyard of table grapes now ripens enough to serve to the guests who stay in his bed and breakfast inn.

Doughty is convinced the changing climate will eventually make the area seasonally hot enough to produce premium wine grapes, loading them with sugar and transforming the area into an extension of the Bay Area’s famous wine country.

“In the future, I can probably get them all ripe and make some dynamite pinot noir,” Doughty predicted.

Doughty claims other anecdotal evidence to support his observations that change is already afoot. Rainfall has become drastically sporadic. In the past he would sequester his cows through the rainy season, turning them loose into the pastures by January 1. But each year he finds he’s letting the cows out earlier as the rains trail off. He says his views of what’s coming are based on the forecasts of scientists.

“And they say it’s changing,” Doughty said. “I’m not going to argue. I’m not a scientist.”

In the storied vineyards of Napa County, predictions of a changing climate have caught the attention of some winemakers. At the 125-year-old Larkmead Winery in Calistoga, winemaker Dan Petroski is not sitting idly by waiting for change to lurch in. He’s planted a small test vineyard with grape varietals popular in dryer climates like Portugal, the south of France and Italy. The infant plants could be the future.

“Last year, 2020, was Larkmead’s 125th anniversary, and instead of looking backwards, we decided to look forward,” Petroski said.

Petroski said since 2008, vintners in Napa Valley have each year doubled the area’s acreage of cabernet grapes to help quench the public’s thirst. Some scientists, however, predict in 20 to 40 years, the valley could become too hot for cabernet to reach its current potential.

“It’s going to get hotter and it’s going to get dryer so that’s when cabernet might falter,” Petroski said, ambling through a research vineyard that includes foreign varietals like Aglianico, Carbono and Tempranillo.

He said the test pilot is slated to run 20 years, giving ample time for the test grapes to mature, bear fruit and produce wines that will undergo the most stringent test of all: tasting.

“We need to be able to say, ‘OK, this is our potential future,'” Petroski said. “Let’s carve out some more land for this.”

In neighboring Sonoma County, noted winemaker and farmer Mike Benzinger has become a first-hand witness to the impacts of climate change, watching as wildfires have edged closer his Glen Ellen farm each year since 2017. On occasion, as a reminder that weather is morphing, sudden winds of up to 95 mph whip through his organic garden which supplies the restaurant he partially owns in town down the hill.

“For every one degree Fahrenheit in increase in average temperature, to be able to maintain the same climate you would have to move 180 miles north,” said Benzinger, citing recent research.

That statistic translates into stark news for grape varietals sensitive to heat, like pinot noir.

“In the first several decades we’ll be able to adapt I think without having to change varieties,” Benzinger said. “But I think if climate change continues to move along we’re going to probably have to reconsider what kind of varieties are being grown here in Sonoma and Napa.”

Back in Point Reyes, Doughty believes the same forces that could have a calamitous effect on Napa and Sonoma could someday shine favorably on the coastal area’s wine-making fortunes, creating conditions in which more of the area’s grassland could be converted to grapes. But if it happens, it won’t be him at the wheel of the tractor. Doughty is trying to sell off his vineyard land and retire to the slow, less unpredictable end of his property.

“It’s just more than I can handle at my age,” Doughty said, maneuvering his truck through a vineyard as a hint of the area’s legendary fog peeled over a distant hill.  “When you get to be 80, it’s time to retire.”