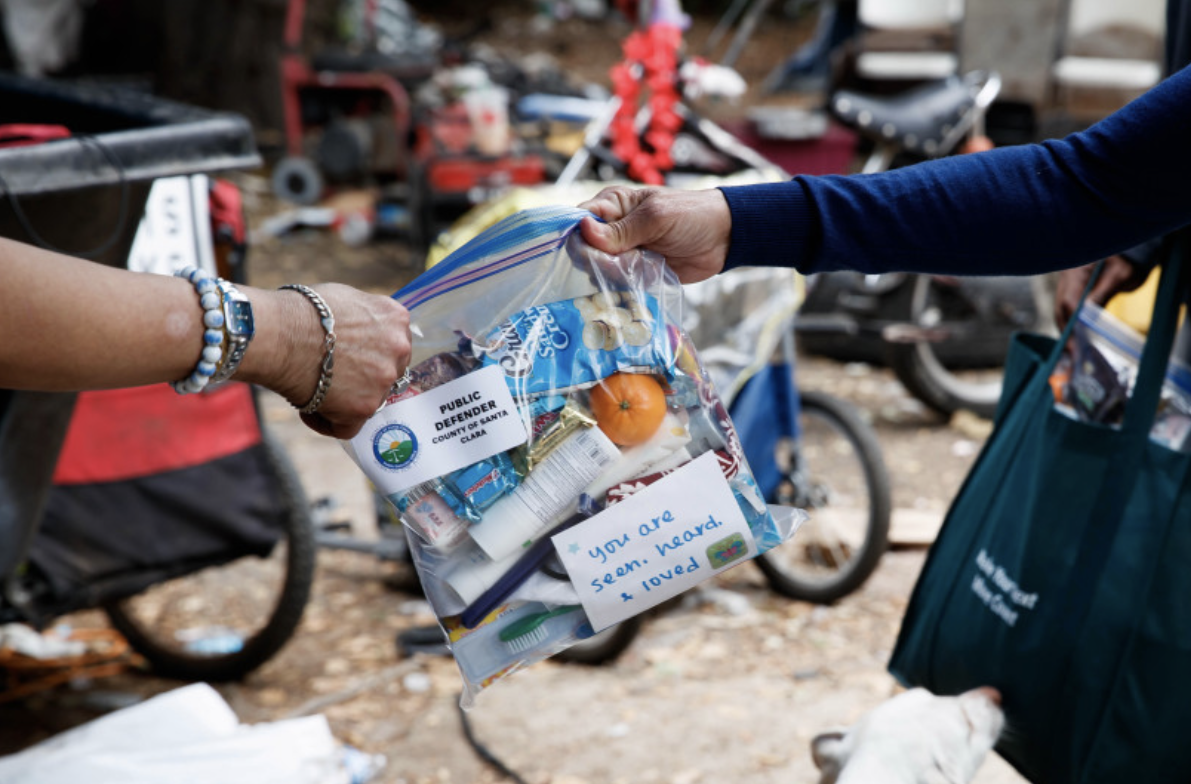 At a time when a terrifying pandemic has stranded thousands of homeless Bay Area residents with limited access to help, Deputy Public Defender Andy Gutierrez had a simple mission: Deliver the oranges.

Transporting fruit is not typically one of Gutierrez’s job duties for Santa Clara County, where, pre-pandemic, he focused on preparing inmates for their parole hearings. Neither is visiting the county’s many homeless encampments and asking: Is anyone sick? Are people wearing face masks? Do you know about COVID-19?

But after homeless services pulled back over worries about the spreading virus, Gutierrez and three of his fellow lawyers stepped in to help a population that has grown by nearly a third in Santa Clara County since 2017, and is expected to become even larger in the aftermath of the coronavirus-fueled economic crisis.

Once a week, Gutierrez, Meghan Piano, Ashanti Mitchell and Jennifer Redding hand out 100 care packages of potentially life-saving face masks, hand sanitizer and soap, as well as comforts like cookies, candy and cards with cheerful messages hand-drawn by local children. They also provide information about coronavirus, tell people which resources are still open, and do things like bring oranges when they’re requested by a group of women living in tents behind San Jose’s Columbus Park.

“We ask them, ‘Has anyone done outreach here?’” Gutierrez said, of some of the remote encampments they visit. “And they’ll say, ‘No, not for several months.’”

The Public Defender Office had been visiting homeless shelters and clinics monthly to offer legal and other services, but when COVID-19 shutdowns began in March, the attorneys quickly ramped up their efforts. Despite many court services shutting down, their regular caseloads haven’t diminished — meaning the lawyers are waking up extra early and working late to get everything done.

So far, the four attorneys have come across just one homeless resident with potential COVID-19 symptoms, who they told to call the county’s hotline and seek isolation housing. But with each weekly trip, they uncover other problems. Residents have no way to dispose of piles of trash. Some people need medication or mental health services. Others have been trying without luck to get into the county’s emergency pandemic housing.

The four lawyers visit encampments throughout the county. On this day, they started with Columbus Park off Coleman Avenue in San Jose, where they’ve established warm relationships with many of the dozens of residents who live in tent communities scattered across open space behind the park.

After handing the oranges to 43-year-old Angel Rosas, Gutierrez told her she’d be a prime candidate for one of the hotel rooms the county is reserving for homeless residents likely to get very sick if they contract COVID-19. Rosas, who walks with a cane and suffers from medical conditions she didn’t want made public, daydreamed about the possibility. It would be great to soak her swollen legs in a bathtub, she said. And she hates living amidst heaps of trash that she can’t clean up — especially when her two teenage daughters visit.

It would be a “huge victory” to get Rosas into housing, Gutierrez said later. But for that to happen, she has to call the county’s hotline — something he’s been suggesting for more than two months.

“With this population, it’s always complicated,” Gutierrez said. “You just have to have a lot of patience and be repetitive and motivate.”

Sometimes it’s not as simple as placing a call. The week before, the team met a skinny, desperate young man outside the bathrooms at Columbus Park, who told them he has a suppressed immune system and is afraid of dying of COVID-19. He called the county hotline, he said, but his call went to voicemail. Then his cellphone died, and he was afraid he had missed his call back.

“If I don’t get out of this situation soon … I’m pretty sure I’m going to end up dead,” he told them.

The team took down his information, and Piano urged him to “hang in there.” Later, the lawyers reached out to the county and let staff know about the phone issue.

Realistically, it’s going to be tough to get him housed if his phone keeps dying, Piano said. And with libraries and community centers closed because of the virus, there are limited charging options for someone on the street.

As they make these rounds, interacting with dozens of people in a day, Piano and the rest of the team wear face masks and regularly douse their hands with sanitizer. They talk often about the risks associated with what they’re doing. When the pandemic hit, they briefly wondered if they should pull back rather than ramp up their outreach.

“I was more terrified about getting them sick,” Gutierrez said of the homeless residents he visits. “I wouldn’t have forgiven myself.”

Funding is another challenge. The group raised about $7,400 in donations to buy items for the care packages, and now has $1,500 left. Piano estimates that will run out in the middle of June.

“Then what?” she asked. “What are we going to do when the funds dry up?”

After dropping off their oranges, the team met up with 36-year-old Sharee Wright, who has been camping behind Columbus Park since she got out of jail in February. After serving three months for burglary, Wright was looking forward to entering a transitional housing program. But then COVID-19 shut down the Bay Area, and Wright stopped hearing from her caseworker.

“The next best option was to stay out here,” she said, gesturing to her tent.

Mitchell promised to contact her probation officer and try to get her back on track for housing.

A short walk from Wright’s camp, the team met Nicholas Acosta, a 30-year-old, HIV-positive man who lives with his dog in a makeshift shelter under a tree. Though he falls into the high-risk group of people more likely to get severely ill if they contract the virus, Acosta said he’s not worried. Plenty of people have urged him to seek out one of the county’s motel rooms, but Acosta’s afraid he would find it too restrictive.

“There’s something about living outdoors that’s just so free,” he said.

People like Acosta, who are living outside with chronic conditions, are why the public defender’s team started doing this outreach in the first place, Mitchell said.

The lawyers may never convince Acosta to move inside, but they can hand him a care package.

The four also worry about what will happen once the pandemic ends. When the courts reopen, the team likely will be tied up handling a backlog of criminal cases.

“Ideally,” Gutierrez wrote in an email, “we find a way to continue this outreach.”