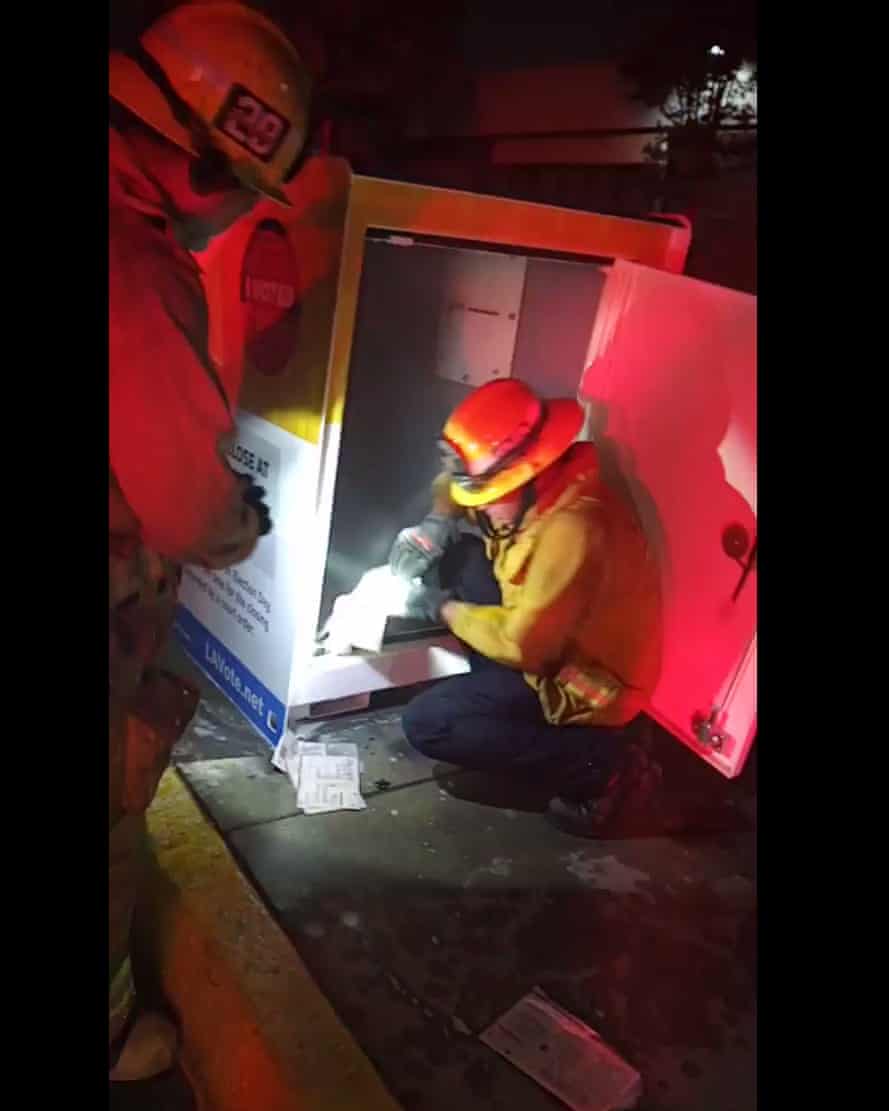 A fire inside an official election drop box in Los Angeles county has damaged voters’ ballots and is under investigation for arson, officials said.

The blaze on Sunday night in the city of Baldwin Park appeared to be intentional, according to authorities, though the cause and the extent of the destruction were still under investigation. The fire required firefighters to spray water into the box to extinguish the flames, probably causing significant damage. Video from the scene showed dozens of wet and burnt ballots.+

“The arson of an official ballot drop box … has all the signs of an attempt to disenfranchise voters and call into question the security of our elections,” Hilda L Solis, LA county supervisor, said in a statement, adding that the county has asked the state attorney general and FBI to investigate.

The LA county registrar’s office, which oversees the elections in the state’s largest county, has not responded to questions about how many ballots were affected, but said officials had last collected ballots from the site at 10am on Saturday. The fire was reported around 8pm on Sunday, and the damaged drop box location has since remained closed.

George Silva, a local resident who saw the fire on Sunday night while on a bike ride, told the Guardian firefighters initially struggled to put out the blaze.

“I saw a lot of smoke coming out of the ballot box,” said Silva, 33, who lives nearby in Baldwin Park, a majority Latino city in south LA county. “Clearly somebody lit something and threw it in there. There’s no way this was an accident. It’s completely outrageous.”

Silva filmed nearby as firefighters ultimately used a saw to cut the metal box. “We’re going to save as many ballots as we can,” one of the responders said on his footage, which showed firefighters pulling out piles of soaked and damaged ballot envelopes.

“I felt a sense of broken-heartedness and disappointment,” said Silva, who runs a local air conditioning business. “I can’t believe somebody would do this.” He hasn’t voted yet and said he now planned to cast his ballot in person when early voting begins later this month. “I’m waiting until I know my vote will be safe and secure.”

The incident comes one week after California’s Republican party sparked confusion by placing their own unauthorized ballot boxes in several counties, prompting state election officials to send a cease-and-desist order demanding their removal. The state warned that the GOP boxes could mislead voters and violate the law.

Monday was the deadline for residents to register to vote in California before the 3 November election. There has already been record turnout, with more than 1m ballots cast in the state. There are hundreds of drop boxes in operation across LA county, and voters can also cast ballots at voting centers starting on Saturday, or they can vote by mail. Voters can also track their ballots online.

The registrar’s office said it was reviewing material collected from the damaged box “to determine the appropriate notifications to voters whose ballots may have been impacted”.

“Tampering with vote by mail drop boxes and ballots is serious criminal offense and we will vigorously seek the prosecution of individuals who engage in such behavior,” said Dean C Logan, the LA county clerk, in a statement.