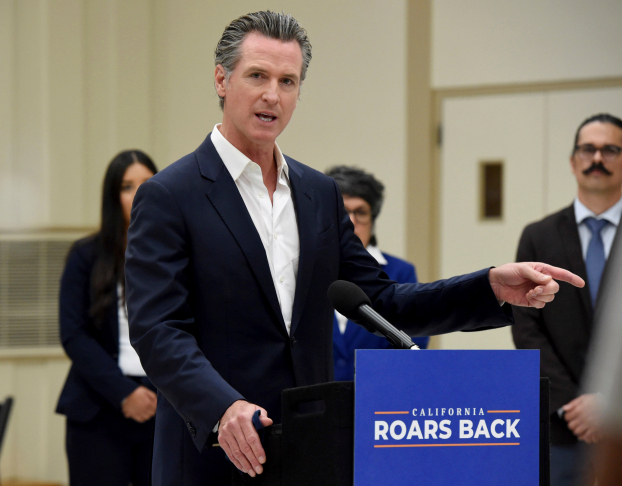 Facing a massive homelessness crisis and a looming recall vote, Gov. Gavin Newsom on Monday funneled an unprecedented $12 billion into services and housing for Californians without homes or at risk of losing their homes.

Newsom signed the funding bill as he stood in front of the Sebastopol Inn in Sonoma County, a hotel that has been converted into homeless housing using state funds. With Monday’s record-breaking funding package, Newsom hopes to build on programs that have successfully provided temporary and long-term shelter to tens of thousands of unhoused people during the pandemic, while also fending off a potential wave of new people ending up on the streets as a result of the COVID-ravaged economy.

This is the “largest single investment in providing support for the most vulnerable in American history,” Newsom said, “and I’m incredibly proud to be able to sign it here today at a location that proves the paradigm.”

The plan includes $5.8 billion to add 42,000 new homeless housing units through Homekey — Newsom’s pandemic program that converts hotels and other buildings into long-term homeless housing. Of that, $3 billion will go toward housing people struggling with mental illness.

“We’re firing everything we’ve got in the arsenal,” Jason Elliott, senior counselor to Newsom, said after Monday’s event. “This is our moment to try and make a material difference in homelessness in California.”

It’s estimated more than 160,000 people live without housing in California, and homelessness has been one of Newsom’s biggest challenges during his time in office. He committed $950 million to the crisis last year — breaking state records at the time.

Newsom proposed this year’s $12 billion investment in May. On Monday, he signed it into law as a trailer bill amending the state budget.

“Because of the governor’s focus, it’s going to change generations of lives across California,” Sen. Mike McGuire, D-Healdsburg, said during Monday’s event.

The plan also sets aside $150 million to continue Project Roomkey — the program that temporarily shelters unhoused people in hotels during the pandemic — and help participants find permanent housing. More than 42,000 people have used Project Roomkey, and the program has nearly 10,500 rooms in its portfolio, Newsom said. But with the arrival of COVID vaccines and the reopening of much of the economy, many Roomkey hotels are closing — leaving local officials scrambling to figure out where to house their occupants.

The Federal Emergency Management Agency reimburses counties for the full cost of eligible Roomkey programs, but that agreement is set to expire at the end of September. Newsom on Monday said he has asked FEMA to extend its support through June 2022.

If FEMA does not agree, the state will pick up the slack “not completely, but substantially,” Newsom said.

Recent COVID outbreaks at Bay Area homeless shelters, including one in Santa Rosa that infected dozens of people and sent a handful to the hospital, have underscored the importance of programs like Roomkey that get people out of crowded shelters where the virus can easily spread. At the same time, vaccination rates in Bay Area homeless communities remain low. In some counties, they are half that of the general population.

Newsom on Monday acknowledged that despite high vaccination rates in the state, there are some populations — including homeless communities — that are falling behind. To combat that, his administration is focusing on campaigns to target vaccine misinformation, opening pop-up vaccination clinics staffed by trusted local doctors and community members, and providing $40 million in grants to facilitate partnerships with local organizations.

“We’re not just doubling down,” he said. “We’re doing substantially more than that.”