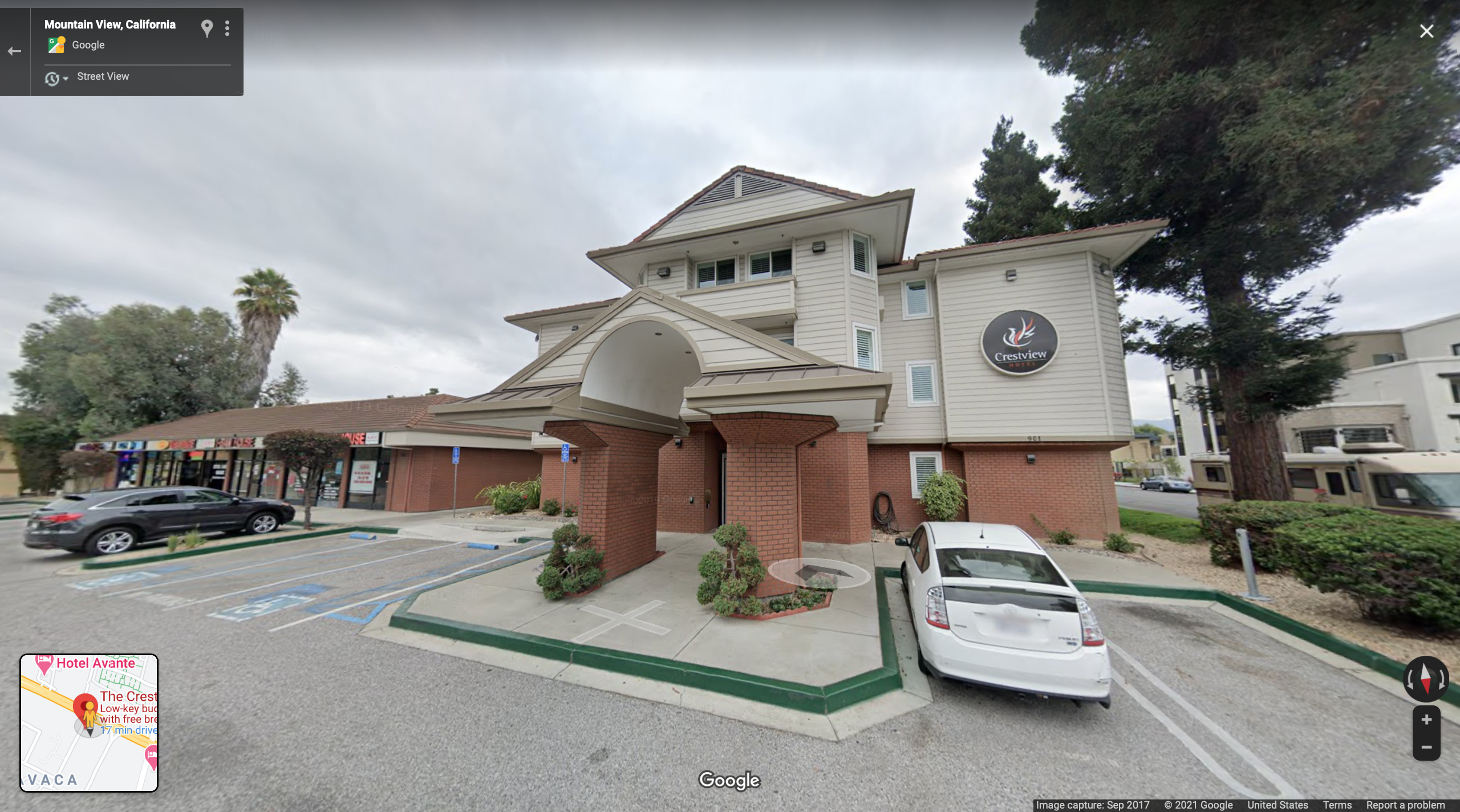 The planned purchase of a boutique hotel by the city to house homeless people has neighbors in Mountain View’s south side divided.

On January 26, the city council unanimously voted to move ahead with the planned purchase of the 61-room Crestview Boutique Hotel at the corner of El Camino Real and Crestview Drive during their first discussion of the project. The city said it would commit $3.7 million for the rehabilitation of the property and intends to find other funding sources, including through a partnership with Santa Clara County.

The city is seeking the county’s partnership and its wallet: the county would most likely use 2016 Measure A money, affordable housing bond funds for the hotel acquisition, city staff said. If the project moves forward undisturbed– and it appears there’s overwhelming support on the council — the city could start moving residents in as early as April 2021.

But less than a month after it was first discussed by the council, nearly 400 people have signed a petition started by Save South Mountain View objecting to the hotel’s purchase. The petition criticized the council for not disclosing early on who will get to live in the property, though some council members have stated that the city’s homeless population and those living in cars could be a good start.

“As concerned homeowners, business owners and parents of children who attend the nearby pre-schools, we are worried that the city does not have a clear plan for the proposed Crestview Homeless Housing Project,” the petition says. “We are further concerned about the potential negative impact to crime and safety within the surrounding neighborhoods if this project proceeds.”

The petition asks the city to halt the purchase of the site until there’s a “comprehensive operation plan for the site” as well as a public hearing to review the plan with potentially impacted residents and businesses.

For Shveta Shahi, a resident of Mountain View who signed the petition, “it’s ridiculous how the city is dumping its decision on us without proper discussion.”

But not everyone feels like Shahi. As a response, Mountain View resident Dori Myer started another petition asking people to support transition housing at the Crestview Hotel. Over 500 people have signed it.

“We are neighbors who believe the location is a well-chosen one,” Myer said. “We have received no evidence that such development would meaningfully reduce property values and furthermore the hotel is located in a commercial corridor that is close to more businesses than houses.”

Myer said the hotel is close to transit, multiple grocery stores and pharmacies, “and fulfills the regional goal of building housing on El Camino as opposed to neighborhoods that have historically pushed back heavily against low-income housing development.”

Myer said she hopes all voices can be shared, “both the positive and the negative.”

But county supervisor Joe Simitian said “it’s early days yet” and at this point there isn’t even a formal proposal on the table. Simitian acknowledged that county staff are indeed having initial discussions on the project with the city, but nothing has come to the county supervisors as a full board or its committees.

“So I would suggest to advocates and opponents to take a deep breath and count to ten,” Simitian said. “Let’s have a serious conversation about what we want to do with that site.”

Simitian said outreach will be key to assuaging people’s worries; he’s no stranger to concerned neighbors opposing developments like this one.

“Effective outreach in the community is essential for a couple of reasons,” Simitian said. “We owe it to them for one, but the second is that if we reach out and really listen we’ll end up with a better project. Outreach is key and listening is key.”

Councilwoman Sally Lieber isn’t worried about garnering sufficient support for the project. Not only has the council already indicated it wants to pursue the hotel conversion, Lieber said it has “overwhelming support from residents.”

“We’ve had such a high level of gentrification and people falling into danger of homelessness that we really have to take action,” she said. “The project is close to services like stores and transit, and what we want to do is have rapid rehousing where we don’t allow people to go through the trauma of becoming homeless.”

Lieber hopes the Crestview becomes a safe haven for Mountain View’s homeless, many of whom have deep ties to the community and were either former renters or homeowners. Officials estimated about 606 homeless people lived in Mountain View in 2019.

Addressing the concerns some neighbors have about crime and safety, Lieber asked them to take a step back.

“I think if people stop and think about the person that they are imagining they might have a different attitude about it,” she said. “This will be a new opportunity for people to really see that people are who unhoused in this economy are unhoused through displacement, through trying to get away from domestic violence, through being simply priced out of their home. We have to make sure as many people as possible have a safe clean quiet place to lay down at night.”