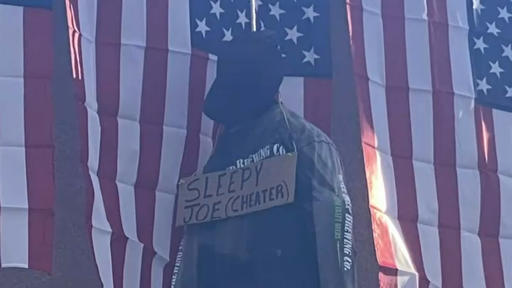 A Trump supporter’s home display prompted protests in a Brentwood neighborhood late Thursday and overnight Friday, and police blocked off a street after the home and other property were vandalized.

People were captured on video in the early morning hours Friday tossing objects, including eggs, at the home, and a vehicle in the home’s driveway had a smashed windshield.

The unrest stemmed from a display at the home of an apparent Joe Biden hanging in effigy. On Thursday, Brentwood police found a mannequin hanging from a rope from the side of a home with “Sleepy Joe (Cheater)” on a sign across the mannequin’s chest.

Officers responded at about 8:10 a.m. to investigate a report of the mannequin and arrived to find it hanging from the side of a second-story home on Craig Court.

Police said the mannequin was clothed with a black hat covering its face, with the cardboard sign, an apparent reference to a nickname President Donald Trump has said about his opponent, Vice President Joe Biden, in Tuesday’s election. The outcome of the presidential race is still pending results in several states.

Officers talked to the homeowner, who agreed to take down the mannequin. It was photographed by police, who showed the photo to the Contra Costa County District Attorney’s Office, which said the act was not criminal and was protected under the First Amendment.

Neighbors said the man who lives at the home has been displaying President Donald Trump signs and Confederate flags for years, but said the effigy crossed the line.

“I was born and raised in Brentwood — lived here my entire life and I’ve never seen something as hateful as this,” resident Madison Weisner said.

Joycelyn Hudson and her family do not feel safe and said the display is threatening.

“It just makes me feel disgusted and sad that we still have to go through this stuff,” Hudson said.

Brentwood police said they are forwarding the matter to the U.S. Secret Service for further review.