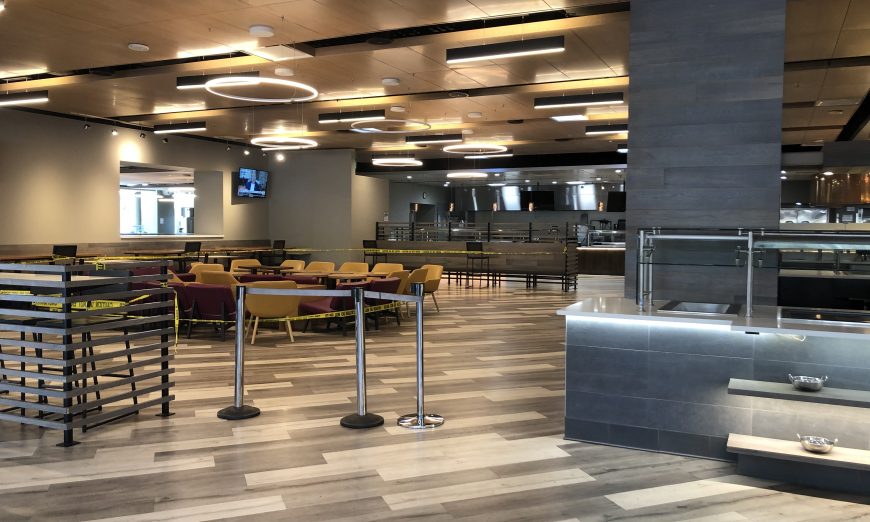 With Santa Clara University (SCU) closed to almost all on campus learning through the end of the fall quarter, some of the university’s most vulnerable employees have found themselves without jobs and without any help.

In mid-April, Bon Appetit, the company that contracts the food service employees at SCU’s Benson Center, placed its workers on temporary unpaid leave. It continued to provide healthcare coverage, but did not pay them. When SCU announced that it would continue distance learning through the fall, Bon Appetit officially laid off the employees.

“When state and county guidelines recommended limiting in-person classes this fall, we had to make the difficult decision to end employment for over 100 staff members not working,” said Bon Appetit Management Company Director of Communications Bonnie Powell. “These former employees have 18-month recall rights through their union contract, meaning when the university reopens and dining services resume, they will be offered employment first.”

But Abigail Alvarez, a third-year political science and Spanish major at SCU says that’s not good enough. She’s one of the leaders of the labor rights group Advocacy for Workers on Campus (AWC) and she’s gotten to know a lot of the cafeteria employees personally. She says many of them are struggling right now.

“It’s already really hard for a lot of them to pay rent, working a low wage job, let alone being unemployed,” said Alvarez. “A lot of them didn’t qualify or somehow weren’t signed up for unemployment benefits. A lot of them just haven’t even received any sort of help.”

Because they are contract employees, they can’t get help from the University either.

“SCU dining services workers are Bon Appetit employees. Emergency funds raised for staff/faculty cannot go to Bon Appetit employees as they don’t work for the University,” said Deepa Arora, Senior Director of Communications and Media Relations at SCU. “The University is in regular contact with Bon Appetit as planning and monitoring of the pandemic continues. We look forward to the safe return of students, faculty, staff and workers like those from Bon Appetit to the SCU campus.”

Alvarez says these employees don’t have the luxury of waiting until things are safe again. She recently started a Go Fund Me page to help them for living expenses like rent. She has personally reached out to many of the employees to find out what their needs are and how the money can best be distributed.

So far, the Go Fund Me page has received donations from students, alumni and professors. Alvarez has far outstripped her initial goal of $6,000 — at last count, the effort had raised nearly $22,000 — but she says a lot more is needed.

“Even though we went well above our goal, it is still not enough to meet all the needs. Every worker is getting a couple hundred dollars, which is not anywhere near enough for rent,” said Alvarez. “I definitely would like to see the company step in and take some sort of bolder action, or maybe even see the University step in and pressure the company, but right now it really seems like it’s all grassroots groups.”