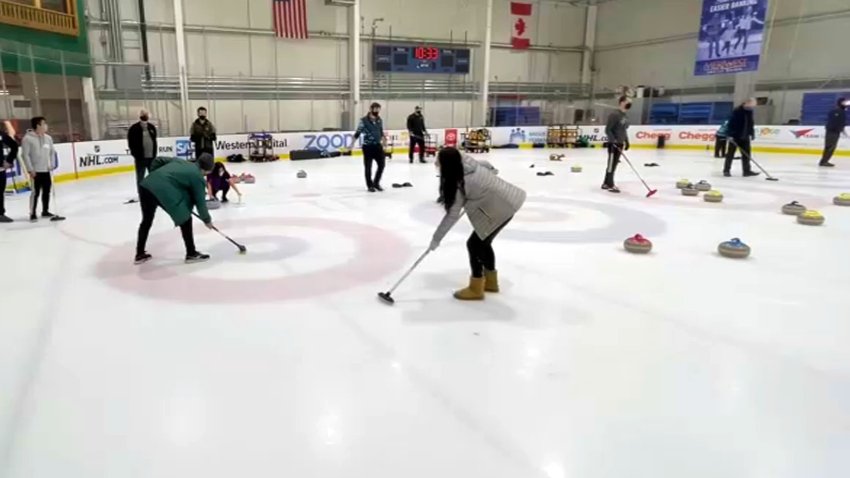 Every four years, interest in the niche winter sport of curling soars.

At Solar4America Ice in San Jose, there are curling league games happening almost every week.

“It’s a wonderfully social game,” David Steele of Silicon Valley Curling Club said. “There’s a lot of camaraderie to it. Every time you think you know what you’re doing in the game, there’s another layer to it.”

Many of the Silicon Valley Curling Club members, like Jennifer Asis, got their start watching the sport on TV.

“It’s insane actually how much attention curling actually gets because no one really knows what it is until they see it on the Olympics, and then they’re fascinated by it,” Asis said.

Nearly every Tuesday at Solar4America Ice, the center rink – usually reserved for hockey – is transformed for curling competition.

“We go through a lot of effort to make curling happen even when we don’t necessarily have a dedicated facility for that around,” Steele said.

Club leaders said in the lead-up to the Olympics, demand soars. During the games, the club shuts down the league to teach the curious public.

“Anyone of any age, skill level, physical ability can play as soon as they learn,” Asis said.

If you want to join in, here’s how curling is played.

“So, two teams take turns throwing 40-pound stones of granite,” Steele said. “They alternate doing that. They throw it at a bullseye and try to get as close to the center as possible…Everybody knows the sweepers or brushers. They’re the folks that are helping to keep it going. The idea is once everybody has thrown all their stones, you see which ones are closer and count the points.”

It’s scored kind of like bocce ball. It’s called curling because the stones curl in on the ice.

In the Olympics, there are 10 rounds, or ends, in a match. And there is an entire language of new lingo.

“The target is actually called the house, the center of that house is called the button,” Asis said.

For newcomers at a recent learn-to-curl event, they became instant fans.

“It’s way more fun than I thought it would be,” Esther Yoo said.