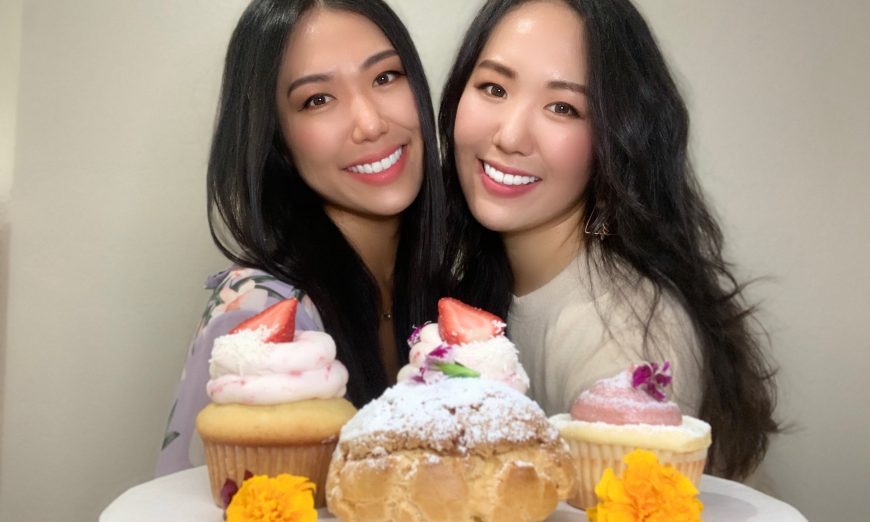 Since September 2019, twin sisters Mindy and Megan Park have been busy with MCourse, the online bakery that they own. Although the business does not have a storefront at this time, these Santa Clara residents have still been busy taking orders.

“We want to open up our own dessert cafe someday,” said Mindy, a pastry chef. “Our dream is to have our desserts lined up for customers to see.”

According to Mindy, the bakery is currently selling whole cakes. Signature cakes that have been popular with customers include the guava cake, earl grey cake with lemon and the Thai tea cake.

“One thing that is special about our cakes is that they’re all tall cakes,” Mindy said. “Our cakes range between five-and-a-half inches to six-and-a-half inches in height. A new item we have out is the almond custard cake. That comes in two flavors — blueberry and cherry.”

“Our cream puffs are also popular,” Mindy adds. “Our cream puffs don’t get soggy within a day. You can keep them in the refrigerator for three days. We use a rich cream. You can mix and match the flavors for the cream puffs when you order them. We have vanilla, ube and matcha flavor cream puffs right now.”

Mindy described another popular item called the mochifin, which looks like a muffin but it is technically mochi but not as chewy as conventional mochi.

“The mochifin is basically a gluten-free item,” she said. “It’s made out of rice flour. It has a light chewy texture. Inside, we add cream. On top, we have two different flavors — the strawberry milk jam and then the mango milk jam.”

While studying at the Professional Culinary Institute, Mindy received the Joseph Amendola Award for being a top pastry student.

“I studied at the Professional Culinary Institute in Campbell back in 2009,” Mindy said. “I was a student in the pastry program there. It was a seven-month program. After I got my diploma, I worked for a Korean baking company called Paris Baguette in Santa Clara. I was with Paris Baguette stores for six years and opened three branches. Then I moved to LinkedIn and worked there and ran two kitchens.”

Before the Park sisters started MCourse, they were working in full-time jobs. But the two dreamt of running a business together. So, when MCourse was first launched, the sisters were juggling between their day jobs and their new gig. According to Megan, sometimes the two stayed up until 2 a.m. baking in their industrial kitchen after their eight-hour shifts at their day jobs.

“We worked full-time jobs during that time at the same company and eventually got laid off on the 1st of July due to the economic challenges of COVID-19,” said Megan, who has a background in event coordination. “Now we have more time to pursue our goals for MCourse.”

Visit www.themcourse.com for more information about the bakery’s menu and placing an order.