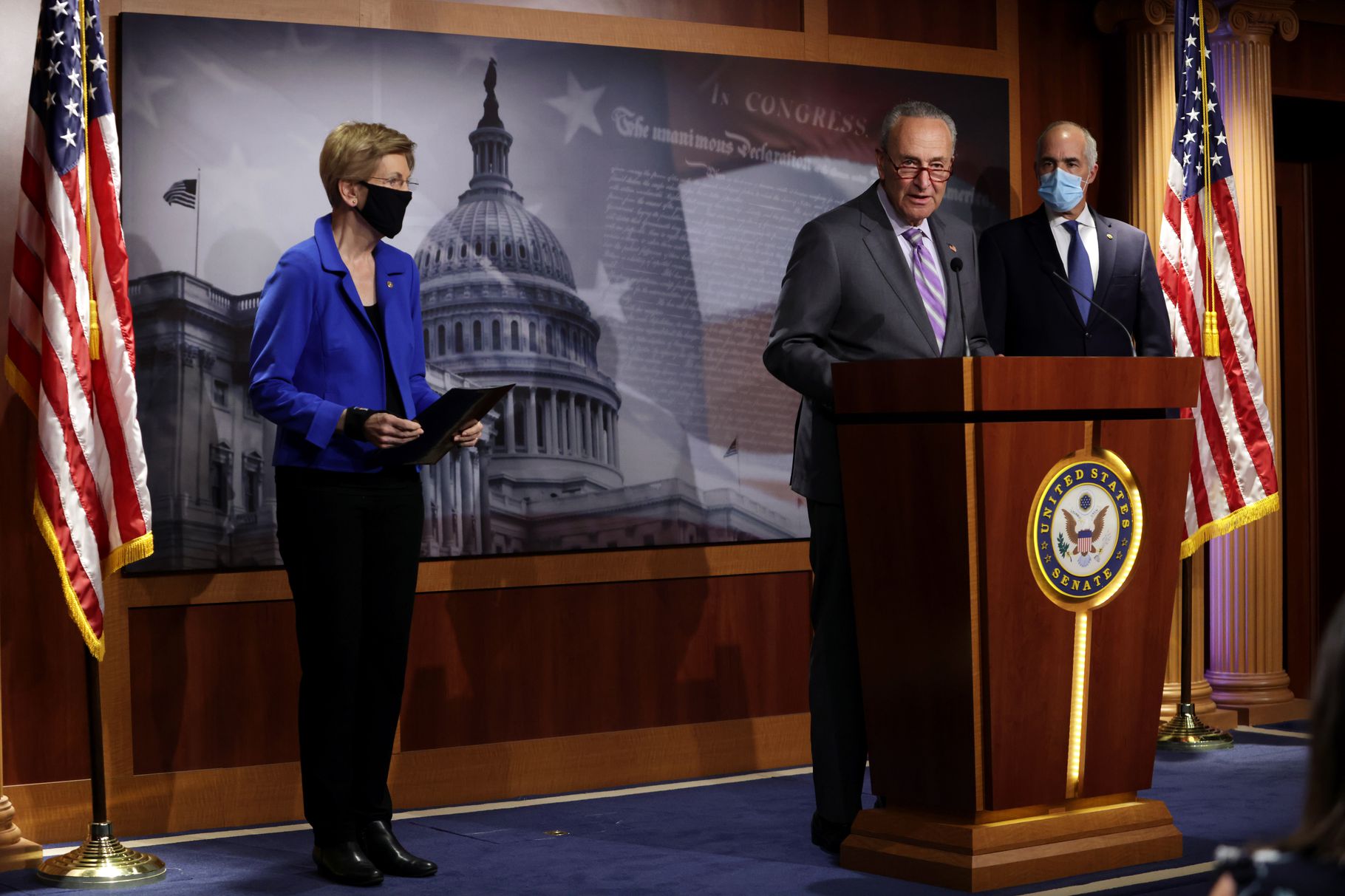 Democrats will commit today to a wide-ranging new progressive agenda that simultaneously tackles pandemic recovery, climate change, and systemic injustice. They’re calling the agenda THRIVE, which stands for “Transform, Heal, and Renew by Investing in a Vibrant Economy.”

Signers range from party leaders like Sen. Chuck Schumer (D-NY) to progressives like Sen. Elizabeth Warren (D-MA), who will introduce the resolution in Congress later today. Activists are also well-represented, with over 150 advocacy groups — including unions, environmental groups like Sunrise Movement, Indigenous Environmental Network, and the Movement for Black Lives — throwing their weight behind the agenda.

The new agenda isn’t official legislation, and it’s unlikely to be introduced in Congress in its current form. Instead, it’s meant as a roadmap for future policy, similar to the Green New Deal resolution made public in February 2019.

The content of the THRIVE resolution is also similar to the Green New Deal, although it also incorporates a response to the economic devastation brought on by the coronavirus. The Green New Deal included three pillars: taking action on climate change, creating green jobs, and addressing environmental racism and injustice. The THRIVE agenda takes a broader approach, incorporating those elements into a new platform of eight pillars aimed at empowering workers, communities of color, tribal nations, and people affected by economic upheavals caused by COVID-19 and other crises.

“Our country is facing crises that are fatefully intertwined: tens of millions of people are unemployed, the COVID-19 pandemic rages, racial and economic injustice are rampant, and the climate crisis is accelerating,” Rep. Deb Haaland (D-NM), who is among the representatives who will introduce the resolution today, said in a statement. “We have an opportunity to not just recover from these interlocking crises, but to thrive by creating millions of good paying, union, clean, green jobs while building a more just, healthy, and stable economy that leaves no one behind.”

To help people find their feet as COVID-19 and climate change disrupt economies and industries, the agenda outlines areas for investment without yet specifying how much money to spend. For communities going through difficult economic transitions, it calls for funding to support local and state governments, diversify economies, and create jobs. It also promotes the revitalization of public institutions, including schools, health care, and the postal service.

Proponents of the THRIVE agenda say it could create close to 16 million new jobs, as estimated by economists at the University of Massachusetts Amherst. Many of those jobs would come from big infrastructure projects like expanding access to high-speed broadband and moving toward clean energy. Retrofitting homes and buildings to cut down on pollution and restoring public lands, forests, and wetlands would also create jobs, as would shoring up public health care systems.

The THRIVE agenda makes the case that strengthening and greening the economy while cleaning up the environment will improve people’s health. The Trump administration has rolled back more than 100 environmental regulations. The new agenda would create policies to curb air, water, and land pollution from fossil fuels and manufacturing.

The resolution also calls for the US to commit to the most ambitious target set in the Paris agreement, keeping global warming under 1.5 degrees Celsius. To do so, greenhouse gas emissions would need to essentially disappear by 2050 — meaning close to no fossil fuels burned. The THRIVE agenda sets a shorter-term goal of running the US power sector on only carbon pollution-free energy by 2035 — an aim included in Biden’s climate plan. Health costs from the damage inflicted by climate change are estimated to reach between $2-4 billion annually by 2030, according to the World Health Organization. Climate change is also expected to cause 250,000 additional deaths each year by 2030 because of malnutrition, malaria, diarrhea, and heat stress.

All of the policy efforts outlined in the new agenda confront legacies of systemic racism and injustice in the US. For instance, the resolution points out the ways in which Black, Latino, and indigenous communities have suffered disproportionately high rates of COVID-19. Those same communities were exposed to pollution that contributes to preexisting health conditions that can make people more vulnerable to the disease.

“To meet this moment, we cannot accept short-term solutions that pretend our problems are siloed and don’t seek to transform the systems that harm Black people,” Karissa Lewis, national field director for Movement for Black Lives, said in a press release.

Forty percent of investment outlined in the resolution should benefit communities of color, low-income neighborhoods, deindustrialized regions, and people facing environmental racism. It mirrors Joe Biden’s commitment to spend 40 percent of clean energy investments in disadvantaged communities. Another pillar of the new agenda focuses on repairing the US government’s relationship with sovereign Native Nations by strengthening Indian treaty rights and ensuring tribes are able to give free, prior, and informed consent to any infrastructure and energy projects that might affect their lands.

The outcome of the November elections could make the difference between THRIVE remaining a political wishlist or it garnering enough political power to create real laws that affect peoples’ lives. But the agenda’s supporters say they won’t back down regardless of who’s in the White House next year. “The fact is a lot of these crises are going to exist no matter what our government is composed of,” says Ashley Thomson, a climate campaigner with Greenpeace USA, another organization backing the agenda. “[The THRIVE agenda] asks us to move forward to a new vision of the future.”