Elon Musk used government money to build Tesla. But he fears a tax on billionaires 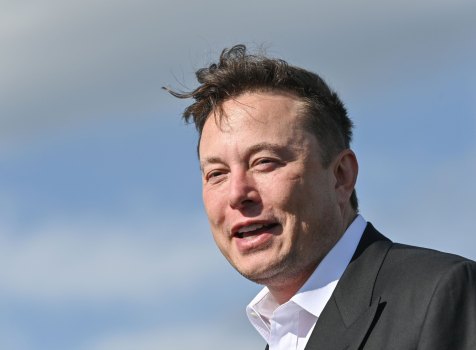 Think of the billionaire tax as the Tesla solution to Democrats’ search for revenue to pay for their expansion of the social safety net … if only they can convince Sen. Joe Manchin, the West Virginia Democrat.

Tesla was built on government cash. For years it used government incentives for people to buy electric vehicles. Much of its current profits are thanks to the sale of government regulatory credits to other, traditional automakers, which allowed them to keep making gas-guzzling pickups and SUVs rather than reduce their emissions.

Investors think it’s a good scheme, which is why Tesla is worth three times more than Toyota but sells far fewer vehicles. Chris Isidore has written repeatedly about Tesla’s various tax credits and incentives.

Its founder, the most epically rich billionaire Elon Musk, has also been known to avoid paying personal income taxes, according to ProPublica.

The twin solution from Democrats — who want money to fund universal pre-K, a Medicare expansion and a host of other priorities — would seek some redress from the men as well as their companies:

About that billionaire tax. It appeared like an elegant, if hastily thrown together, solution Tuesday and was already in serious jeopardy Wednesday.

Instead of being stuck behind their moderates, now Democrats are stuck between them.

So Democrats are still working on a way to tie their caucus together, deliver President Joe Biden his promised platform and sew up the expanded social safety net for all Americans.

The tax on billionaires could be a game-changing concept in a country where income inequality has been a top issue. Most new wealth is concentrated among the very rich.

Why is a billionaire tax necessary? The biggest billionaires often don’t appear to live off their own billions. Rather, they keep value in their companies or assets, avoid taxes by never selling them and instead borrow spending money from creditors. When they die, their heirs pick up where they left off.

The method, as described on CNN.com by the University of Southern California law professor Edward J. McCaffery, is simple: Buy. Borrow. Die. And avoid a lot of income tax in the process. McCaffery argues the plan released by Sen. Ron Wyden of Oregon should not be viewed as a wealth tax but rather as the closing of a gaping and very lucrative loophole not available to the vast majority of Americans.

How would a billionaire tax work? It’s complicated. Wyden’s plan stretches to 107 pages.

“For tradable assets, such as stocks, billionaires would pay capital gains tax, currently 23.8%, on the increase in value and take deductions for losses annually. They’d be able to carry forward the losses to offset future taxable income and capital gains, and in certain circumstances, to carry back losses for three years.”

Billionaires could spread a first whammy tax bill in 2022 over five years and there’s a method to let them claim losses. Wyden has a clever way to handle billionaires transferring wealth to real estate and other non-tradable assets, not taxing them annually but rather applying an additional interest charge when they are sold.

What happens to billionaires who lose money? If they fell on hard times, they’d revert to the regular tax system. Billionaires do lose money. West Virginia’s Gov. Jim Justice was the state’s only billionaire until his UK-based lender went belly up.

That’s an interesting side point, actually: The senator sticking up for billionaires to avoid income taxes is Manchin, whose state of West Virginia does not currently house any billionaires, according to Forbes.

Is a tax on billionaires legal? It would be if Congress passed a law. Billionaires have plenty of lawyers. They’d argue it violates the Constitution. The case would go to court.

Who would the billionaire tax affect? Not many people, comparatively. There are just about 333 million people in the US, according to the US Census Bureau. A little more than 700 are billionaires. The proposal would also place new taxes on those who declare more than $100 million in income for three straight years.

How come people say billionaires don’t pay the same tax rate? We already know how billionaires skirt the tax code. Former President Donald Trump carried one year’s massive loss to avoid paying much or any income tax for 10 of 15 years, according to tax documents leaked to The New York Times.

Billionaires’ wealth is often tied to company stock. Rather than sell it and pay capital gains, they borrow huge amounts of tax-free funds against their stock value. They live off the borrowed cash while their bottom lines grow and pay much less in interest than they’d pay to the IRS.

ProPublica reported this year on IRS files that show how Bezos, Musk and others use this method to avoid paying much or any income tax compared with their wealth.

When they need new loans, there are banks waiting in line.

Bezos does regularly sell billions in Amazon stock and uses those funds for things like his Blue Origin space tourism company.

Where are the billionaires? California has the most billionaires, even though it lost two of its richest people in the last year: Musk and Oracle’s Larry Ellison moved to Texas and Hawaii, respectively. But California still gained 24 billionaires in the past year, according to Forbes.

New billionaires are popping up all the time. Moderna wasn’t the first Covid-19 vaccine out of the gate and it benefited from government help, but multiple people with money in the biotech firm cross over into billionaire land. They, too, could be taxed to expand the social safety net if Democrats can find a path Manchin agrees with.