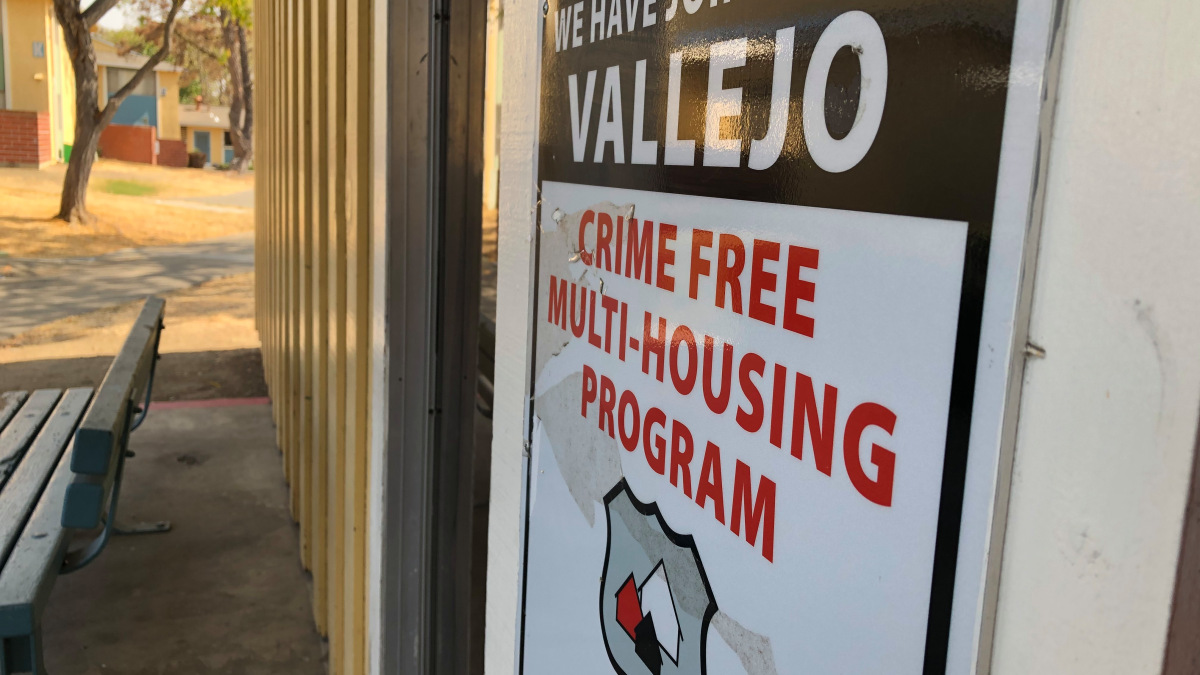 A Bay Area investigation reveals a police-run housing program that teaches landlords how they can legally discriminate based on behavior because “behavior is not a protected class.” One manual instructs landlords that people with police records are “two-legged predators” and compares criminal activity to a dinosaur that must be killed while it’s still in the egg. A research study found the program “sustains racial segregation by allowing police officers to pick and choose who may live in a community,” and allows landlords to bar applicants for minor legal infractions. The Crime Free Multi-Housing Program is operating in at least 11 Bay Area cities.

“When I got arrested that day, June 5th, 2007, I looked in the mirror and that reflection I saw, I said, ‘You got me into this,’” said John Jones III, after an assault charge sent him to prison for the second time.

“You do everything you can to not only prevent coming back,” he said, adding “Make sure that my kids don’t experience that. So from day one, I made a personal commitment.”

But when Jones left prison, housing developments shut him out.

“A lot of landlords, they were advertising it – must have a clean criminal record,” he said.

Then Jones lost the mother of one of his sons to breast cancer and became a single dad with young boys, desperate for a place to call home.

…the sense of shame…I couldn’t provide better housing and shelter for my kids.

For two long years, Jones and his sons lived in a basement.

“I’m so frustrated that this time I have a good job, I make a decent salary, I’m able to afford the rent…and as a father, just the sense of shame. I couldn’t provide better housing and shelter for my two kids,” he said.

While investigating why people like John Jones are being kept out of housing, the NBC Bay Area Investigative Unit came across the Crime Free Multi-Housing Program.

Did you know it is not illegal to discriminate based on their behavior?

The program’s founder, Tim Zehring, did not respond to repeated requests for an interview.  A former Mesa, Arizona police officer, Zehring says in a YouTube video that as a police officer he spent 70% of his patrol time in multifamily housing rental properties.

“The crime-free housing program was our best option to deal with crime in rental housing,” says Zehring, who created the program in 1992.

Zehring’s website says the program, which is typically run by police departments,  has spread to 2,000 law enforcement agencies across the country.

The program has three parts. First, police train landlords on tenant screening and crime prevention, then they inspect the property and recommend improvements in lighting and security. Finally, the landlords hold a neighborhood social and display their crime-free certification. Housing nonprofit groups told NBC Bay Area the program is used as a license to turn down any applicant with a criminal record.

“Did you know it is not illegal to discriminate based on their behavior? Behavior is not a protected class,” said Zehring in his YouTube video., continuing, “In fact if someone has a violent criminal history … you can turn them down for your rental housing.”

In her study on Crime Free Multi-Housing, published in the Michigan Law Review, professor Deborah Archer writes, “Residents of racially segregated communities … experience increased contact with the criminal legal system.”  Archer concludes that crime-free housing ordinances “expel people of color, especially Black people” and have the “effect of ‘whitening’ some communities and ‘Blackening’ others.”

This is an example of institutional racism!

“This is an example of institutional racism,” said Louis Chicoine, CEO of Abode Services, a housing nonprofit in Fremont. Chicoine has seen would-be tenants rejected for housing repeatedly due to minor infractions like loitering. He points out that in some cases, an accusation of a crime was enough to keep someone out of housing or kick them out of their current home.

“We challenge the fundamental assumption that just because someone had a problem when they were younger years ago often that they’re going to have a problem going forward,” Chicoine said.

But the most troubling example of the crime-free housing program is in the city of Vallejo, as seen in documents obtained by NBC Bay Area.

The easiest way to kill a dinosaur is while it is still in the egg.

“I guarantee you this is not part of their selection criteria.” said Judy Shepard-Hall, housing director for the city of Vallejo, staring at Vallejo’s Crime Free Multi-Housing documents.

“Where did this come from?” asked Shepard-Hall, “It doesn’t have any date on it.”

The city of Vallejo provided the document to investigative reporter Candice Nguyen two weeks prior to the interview. Immediately after the interview, Vallejo spokesperson Christina Lee said the document “That should be burned. It should never have been written in the first place, not yesterday, not today, not tomorrow.”  In a news release, Shepard-Hall later said: “I am grateful that the reporter shared her findings with the city regarding the unsuitable terminology of this training document. [It] did not speak to the values of the city, nor the housing or police departments. I knew we had to do something to rectify this immediately.”

The city cut ties with the former Vallejo police officer they hired as a consultant to run the program, and  the program is now on pause until it “receive[s] a much needed update.”

Shepard-Hall told NBC Bay Area that the program has been used in 15 properties across Vallejo. Research by the Investigative Unit confirmed that at least 11 cities across the Bay Area are using the program: Dublin, Fremont, Fairfield, Hayward, Livermore, Pittsburg, Richmond, San Ramon, San Leandro, Vacaville and Vallejo.

Chicoine says it’s only fueling the Bay Area’s already crippling homeless crisis.   “We saw over and over again landlords unwilling to even consider one of our clients for housing because of this policy,” he said.

“I am human. I am a father,” said Jones. “I’m someone who made mistakes. I am not the sum of those mistakes.”

For information about federal and state laws:

This article was updated to include an additional statement made by the City of Vallejo spokesperson after the interview about the Vallejo Crime Free Housing booklet:  “It should never have been written in the first place, not yesterday, not today, not tomorrow.”