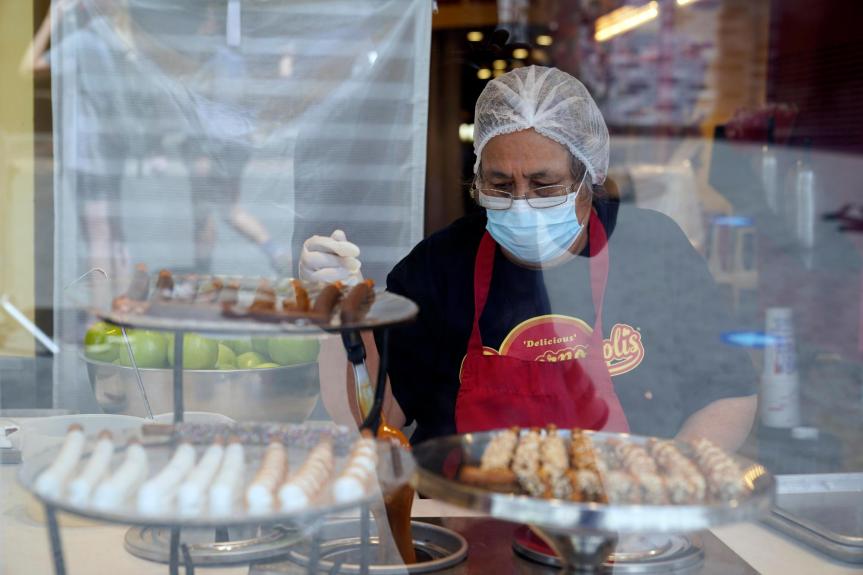 Workplace regulators are poised on Thursday to extend California’s coronavirus pandemic regulations into next year with some revisions that business groups say could worsen the labor shortage.

The main change to the California Occupational Safety and Health Standards Board’s revised temporary rule is that it would erase current distinctions between vaccinated and unvaccinated employees.

Both would be barred from the workplace if they come in close contact with someone with the virus.

The revised temporary rules would require that exposed, vaccinated but asymptomatic workers stay home for 14 days even if they test negative or, if they return to work, wear masks and stay 6 feet (1.8 meters) from anyone else during those two weeks.

“Treating vaccinated and unvaccinated people similarly really denies the scientific value of the vaccine and disincentivizes vaccination,” said Rob Moutrie, a policy advocate at the California Chamber of Commerce.

The board’s consideration comes a day after California reinstituted requiring both vaccinated and unvaccinated people to wear masks indoors in a bid to slow the spread of the virus, including the omicron variant, as families and friends gather during the holidays and new coronavirus cases increase.

Under current workplace rules, vaccinated employees can keep working even if they’ve been exposed, unless they show symptoms, under the assumption that the vaccine generally will protect them.

The Biden Administration has ordered all U.S. employers with more than 100 workers to be vaccinated, tested regularly or wear masks at work starting Jan. 4, but the order is stalled amid court challenges from Republican-led states and fears from employers that the rules would only add to the worker shortage.

Regulators were foolish to loosen the restrictions in June under pressure from employers and are smart to tighten them now, said Mitch Steiger, a legislative advocate for the California Labor Federation.

“It’s good that we’re realizing that vaccines aren’t the silver bullet to get us out of this,” Steiger said. “There’s never a good time to start disarming against COVID-19.”

The chamber led a coalition of about 60 business groups arguing in a letter to the board that vaccinations are still largely effective and usually prevent serious illness and death even if there are breakthrough infections.

A planned change that would require testing even of vaccinated workers with no symptoms could also strain the availability of rapid tests and boost employers’ costs, said the groups, which include agribusiness, retailers, homebuilders, restaurateurs and manufacturers, along with cities and counties.

The stricter safeguards “will only worsen the present labor shortage affecting California workplaces,” Moutrie predicted. “Moreover, reinstituting social distancing on a per person basis is just not feasible in many work places” that would have to move physically move workstations or equipment.

The rules apply in almost every workplace in the state, including to workers in offices, factories and retail.

The Motion Picture Association said the safeguards are not feasible for those filming movies, television shows or commercials because “employees who work in front of the camera cannot be expected to wear a face covering” and those doing hair and makeup “cannot perform their job duties while maintaining six feet of distance from other employees.”

The Cal/OSHA board conformed its current regulations to general statewide standards imposed by Gov. Gavin Newsom in June only after weeks of intrigue during which it first postponed, then rejected, then adopted, then rescinded earlier proposed rules that would have conflicted with Newsom’s broader directive.

Labor interests generally haven’t objected to the latest changes, which would be in effect from Jan. 14 through April 14.

But they are upset that other proposed rules to be considered in March would eliminate employer-paid sick leave for employees who are exposed to or contract the virus.

The goal was to allow lower-wage workers without sick time to take time off rather than coming to work and spreading the virus because they couldn’t afford to stay home.

If the proposed elimination stands, “workers will be forced to make the impossible decision of going to work while sick or staying home without pay,” Stephen Knight, executive director of the labor advocacy group WorkSafe said in an online petition to the Cal/OSHA Standards Board.

Labor advocates could also work through the state budget process, Legislature and governor to keep the program, but prefer to retain the existing requirement, Knight and Steiger said.

The board on Thursday is separately hosting a panel discussion on how it should handle future pandemic regulations, prompted by a proposal last month by the Western Steel Council.

The council suggested in a letter to the board that the whole regulatory process has become so complicated and the pandemic so ever-changing that the board should stop trying to set its own workplace rules.