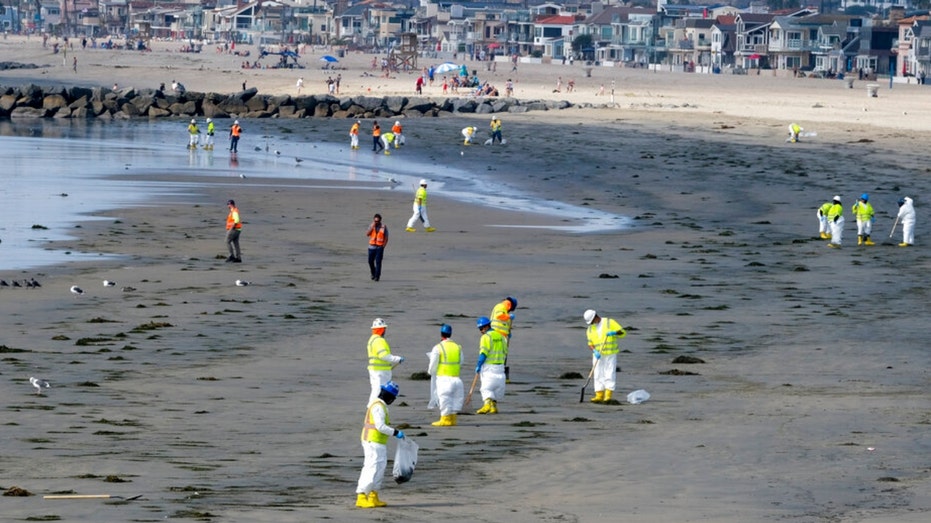 A federal grand jury indicted three companies Wednesday on charges related to the illegal discharge of oil during a pipeline break that leaked thousands of gallons of crude oil into the ocean off Huntington Beach in early October.

The indictment, announced by U.S. Department of Justice officials, claims that Amplify Energy, owner of the pipeline that leaked 25,000 gallons of oil into the sea off Orange County, and two of its subsidiaries, failed to properly respond to eight separate leak alarms over 13 hours and improperly restarted a pipeline that had been shut down, among other allegations.

The indictment comes as cleanup and repairs related to the spill continue, and a civil legal battle over the spill is taking shape. If offers the most detailed outline yet to what is alleged to have happened in the lead-up to the public announcement of an oil spill that forced a nine-day closure of beaches and harbors in a string of communities along the Orange County coast.

As a result of the newly filed indictment, Amplify and its subsidiary companies – San Pedro Bay Pipeline Company, which operated the pipeline that transferred oil from offshore facilities to a processing plant in Long Beach, and Beta Offshore, which operates oil rigs – could now face millions of dollars in fines and five years of probation, according to federal prosecutors.

Amplify officials wrote in a statement that they are “committed to safe operations that keep our people, the environment, and the communities in which we operate safe at all times,” and asserted that “the prompt actions and reasonable care our employees demonstrated in responding to events on October 1 and 2 reflect that commitment.”

The grand jury indictment alleges that despite the pipeline beginning to leak on the afternoon of Oct. 1, the company continued to operate the damaged equipment on and off until the following morning.

The result, according to the indictment, was about 25,000 gallons of crude oil being discharged from a crack in the 16-inch pipeline located a little less than five miles west of Huntington Beach.

Federal prosecutors accused the companies of operating the pipeline with an understaffed and fatigued crew that had not been properly trained on an automated leak detection system, and who failed to properly respond to the eight alarms activated between 4:10 p.m. on Oct. 1 and 5:28 a.m. the following morning.

The crew shut down and then restarted the pipeline five times after the first five alarms were triggered, according to the indictment, resulting in oil flowing through the damaged pipeline for a combined three hours.

The indictment alleges that while performing a manual leak-test the crew pumped oil for another three hours in the late-night and early-morning hours.

The pipeline was operated for another hour in the predawn hours, despite an eight alarm, when a boat the crew contacted didn’t see oil in the water in the middle of the night, the indictment alleges.

In their statement released in response to the grand jury indictment, Amplify Energy officials said that their crews had been working to troubleshoot and fix what they believed at the time to be false leak-detection system alarms.

According to Amplify’s statement, their workers’ efforts were complicated by a leak detection system that was “not functioning as designed, but was repeatedly and wrongly signaling a potential leak at the platform where no leak was actually occurring…

“Instead, as the factual record shows today, the leak occurred over four miles away, where the pipeline had been displaced more than 100 feet by a ship’s anchor – a fact not shared with Amplify by anyone with knowledge of that anchor-dragging incident,” the Amplify statement reads. “Had the crew known there was an actual oil spill in the water, they would have shut down the pipeline immediately.”

Amplify officials said they immediately put into motion their “federally-approved oil spill response plan” after seeing the sheen in the water on the morning of Oct. 2.

The actual cause of the leak is under investigation. Investigators are reportedly looking into the possibility that an anchor, or anchors, from one or more commercial ships could have struck the pipeline.

In light of the indictment, some state leaders placed the blame for the oil spill’s impact directly on Amplify.

“I am outraged by the complete and utter failure of Amplify Energy to do their job,” Assemblywoman Cottie Petrie-Norris, who chairs a special state legislative committee on the spill, said in an email. “Their absolute negligence caused devastation in our coastal community. This was not a freak incident— someone here is to blame, and justice will be served.”

The allegations in the indictment didn’t come as a shock to some other local officials.

“We knew from the beginning there was oil reported out near the platform and there was some indication that somebody out there knew, and for whatever reason during all these press briefings they (Amplify officials) continued to mislead the public into believing it (the spill) started the next day,” Foley said. “That’s terrible.”

A few days after the spill was discovered, Amplify Energy CEO Martyn Willsher told media the company was not aware oil had spilled until Saturday morning, Oct. 2, saying, “If we were aware of something on Friday night, I promise you we would have immediately stopped all operations.”

Pete Stauffer, environmental director for the Surfrider Foundation, said Wednesday that oil and gas companies are often slow to respond to a leak or spill, “and it’s really unfortunate because what happens in the first minutes and hours of an oil spill is really critical in terms of the ability to contain the spill and respond to it before the oil starts to spread.”

He called the allegations in the indictment “highly concerning” in light of the fact that Amplify is required to report any spills to regulators in a timely way.

Foley said she’s pleased that criminal justice officials appear to be taking strong action to hold the pipeline operator accountable, but she’s also looking ahead in the hope of preventing future mishaps.

“We’re worrying about the next platform that is understaffed with unskilled workers who are fatigued, we’re worrying that the systems don’t work, and until we can get these rigs decommissioned, we’ve got to be more diligent to ensure they’re complying” with all regulations and safety protocols, she said.

The Orange County District Attorney’s Office also has an open investigation into the oil spill. DA Todd Spitzer pushed for an independent investigation soon after the spill, and insisted that Amplify officials be kept at arms length, raising concerns they could tamper with the scene or destroy evidence.

“It is sickening to witness the destruction to our beautiful Orange County beaches and the lasting economic devastation that this disaster will cause our counties,” Spitzer said in a statement on Wednesday. “The people responsible for endangering our wildlife and marring our picturesque beaches and shorelines must be held accountable.”

Civil lawsuits have already been filed by local businesses, homeowners and community groups, alleging that poor maintenance of the underwater pipeline led to polluted public beaches and damaged private property along the coast.

In the wake of the spill, state officials have discussed tightening up existing rules in order to streamline spill notifications, allocating more resources to local agencies to help them respond to spills and taking a fresh look at potential new technologies to detect leaks and spills.

The spill also prompted city leaders in Huntington Beach and Laguna Beach to pass resolutions calling for limits on off-shore drilling. Other cities, including Costa Mesa and Dana Point, adopted similar resolutions several years ago after the Trump administration proposed drilling in almost all federal waters.