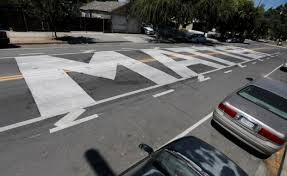 City officials in San Jose on Tuesday were trying to figure out what to do with a recently painted “Black Lives Matter” mural that spans three blocks on a busy neighborhood street.

The BLM mural looms large not just in physical terms, but also in the dilemma that it presents to everything from free speech to traffic safety.
The view from Sky Drone 5 gives some sense of the mural’s enormous scale. It stretches from one bike lane to the other on Empire Street, running between 15th and 18th streets.

The mural is now about five weeks old and has started to take on a more greyish tinge due to street traffic in the neighborhood.

An area resident who simply gave her name as Juliette was one of the hundreds of neighbors who came out to paint it on July 4th.

When asked why she felt it was important to paint it, she replied, “There’s been a lot of protest downtown but I think in general like it’s been kind of out of sight for the neighborhoods further from downtown. And it was great! There was the support of the community [and] a lot of people on our street. The mayor lives one street over. We wanted to really send a message that this community cares about black lives.”

San Jose Mayor Sam Liccardo, who has a Black Lives Matter sign posted outside his home, weighed in about the mural Monday. He said the city is figuring out what to do next, since the mural is technically unauthorized.

“We’ve gotten complaints certainly from lawyers who live in other counties. Some have threatened to sue us and so that’s really what we’re grappling with,” said Liccardo. “We know that legal challenges are very common in this situation. Cities have to pay out very large settlements and payouts for attorneys fees over these kinds of issues, we’d like to avoid that we want to do what’s right at the same time that we’re not wasting taxpayer money on needless litigation.”

In Martinez, the city actually authorized the painting of a large mural in bright yellow right near the county courthouse. That mural was defaced on the same day it was painted, leading the Contra Costa County District Attorney to charge the vandals with a hate crime.

The incident was captured by witnesses on video that went viral after being posted to social media.

The two defendants entered a not guilty plea last week.

In Redwood City, officials quietly had their mural erased when a local resident asked for permission to paint a MAGA 2020 mural alongside it.

“There’s also issues around the First Amendment. And if we allow the message here on this street when someone wants to pay something like Trump 2020 or making America great again, then the state will will require that, the federal Constitution will require as a city that we allow that message as well,” explained Liccardo.

He also said the mural could potentially be a traffic safety issue.

“We’ve got state and federal prohibitions on allowing any kind of markings that are not strictly related to what is necessary in a roadway,” said Liccardo. “And so we’re trying to work through those challenges as well as First Amendment challenges.”

Neighbors told KPIX 5 that when driving on Empire Street, the mural does not present any major issues.

“People are used to driving along here and sometimes it’s not even noticeable when you’re driving,” said Mark Patrosso.