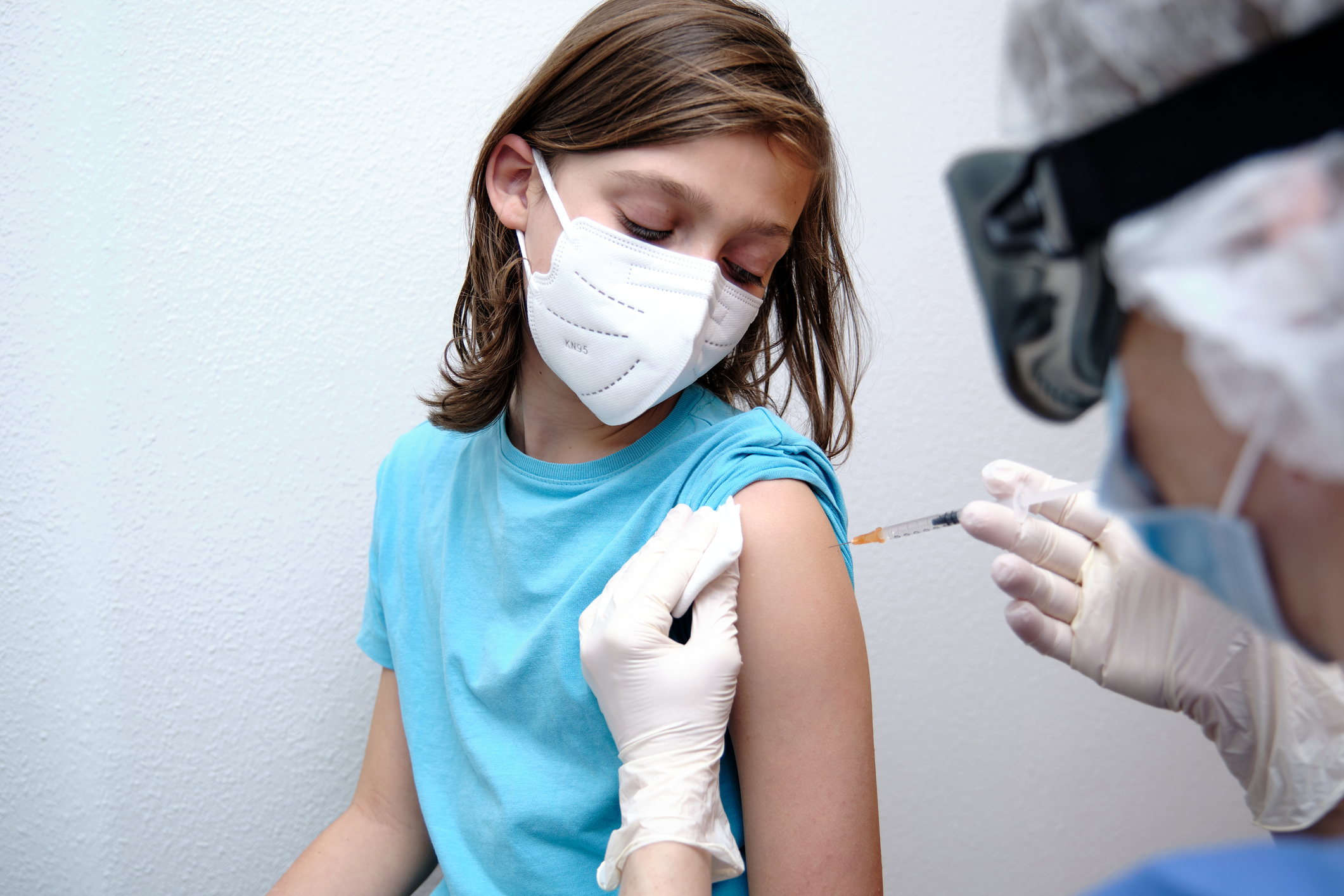 The COVID vaccination saga is about to enter its newest iteration: Getting shots into the arms of the youngest Americans, including children under 12. But just when will the Pfizer vaccine or Moderna vaccine for kids roll out? Sooner than you might think.

Some vaccines could be coming by Halloween

Pfizer and partner BioNTech, which has the only fully Food and Drug Administration (FDA) approved COVID vaccine and the only one that can also currently be used in kids aged 12 to 17 under an FDA emergency use authorization, announced a number of updates to its timeline for even younger children’s coronavirus jabs this past week.

Pfizer chief financial officer Frank D’Amelio told attendees at the Morgan Stanley health care conference that the company will be offering up data on the vaccine’s safety and effectiveness in children under 12 and as young as 5 by the end of September and file for an expanded emergency use authorization in that age group just weeks later in early October. The drug giant may also file for emergency use for the youngest kids aged 6 months to 5 years old within the first few weeks of November.

Of course, filing for expanded use of a drug doesn’t guarantee success. Those are decisions that will be left to the purview of the FDA and recommendations from the Centers for Disease Control (CDC). But given the pace of previous emergency use green lights and regulatory reviews, the Pfizer vaccine for kids could be made available right in time for trick-or-treating season, as former FDA commissioner Scott Gottlieb predicted on CBS’s Face the Nation on Sunday.

“FDA has said it’s going to be a matter of weeks, not months, in terms of their evaluation of that clinical data to make a determination whether they’re going to authorize vaccines for kids aged 5 to 11,” said Gottlieb. “I interpret that to mean perhaps four weeks, maybe six weeks. But I think in a best-case scenario, given that timeline they’ve just laid out, you could potentially have a vaccine available to children aged 5 to 11 by Halloween.” Gottlieb was elected to Pfizer’s board of directors in June 2019 following his departure from the FDA’s top perch.

Moderna vaccines for kids are still a ways off

The timeline is a bit more nebulous for the Moderna vaccine. The biotech filed for full FDA approval of its COVID jab in people aged 18 and older in late August and requested the agency expand its current emergency authorization for adolescents aged 12 to 17 in June. That has yet to occur even though Pfizer was granted its initial emergency authorization for those 16 and older back in December 2020 and won an expanded emergency designation among 12-to-15 year-olds in May.

So it will likely take Moderna weeks, if not months, longer to first gain regulators’ blessing in the 12 to 17 crowd (the company points to clinical trial data demonstrating extremely high efficacy in more than 3,700 U.S. teens to justify its vaccine’s use among this group) and longer still for the youngest children under the age of 12. Johnson & Johnson and its single-dose coronavirus shot are even further behind in the process, although it did begin testing its vaccine in 12- to 17-year-olds in the spring. Both Moderna and Pfizer have enrolled or begun enrolling study participants as young as six months old for their respective COVID trials.

Caution and patience are still warranted

Public health experts and government officials warn that although some COVID vaccines may soon be available for the 28.4 million children between the ages of 5 and 11 in America, parents shouldn’t look at the seemingly imminent emergency use authorization expansion for the Pfizer jab as an excuse to seek its off-label use in that demographic, meaning that someone who isn’t officially authorized to receive a vaccine could get one. Pediatric COVID vaccine trials from Pfizer/BioNTech and Moderna are still ongoing and must grapple with special safety, ethical, and practical considerations, as acting FDA commissioner Janet Woodcock and the FDA’s Center for Biologics Research and Evaluation director Peter Marks wrote in a joint statement on September 10.

“Children are not small adults—and issues that may be addressed in pediatric vaccine trials can include whether there is a need for different doses or different strength formulations of vaccines already used for adults,” they wrote. For instance, a COVID vaccine could theoretically turn out to undermine the effectiveness of other jabs administered at a young age or increase the risk for extremely rare side effects such as myocarditis, or heart inflammation, observed in certain adolescents who received COVID vaccines.

Other children’s medical groups such as the American Academy of Pediatrics (AAP) have urged similar caution regarding off-label vaccine use for people who aren’t technically cleared for them, such as younger kids, while encouraging the FDA to work as fast as possible on getting younger children their shots given the continued global threat of the Delta variant. This process that would require a growing pool of COVID vaccine trial participants and somewhere between two and six months of follow-up reviews to make sure the shots don’t produce dangerous side effects or require different dosing regimens in young people. Vaccine testing among children is a rolling process which began in the spring in partnerships between Pfizer and Moderna and various medical institutes, but the inherent waiting period between doses, differing study designs, and the need for careful follow-up once a young patient has been given a full course of COVID vaccines make the timeline a bit more fluid and in part explains why the clinical process for kids takes longer. Emergency authorizations can be revoked or adjusted should new real-world data justify a change.

“We understand that the FDA has recently worked with Pfizer and Moderna to double the number of children ages 5 to 11 years included in clinical trials of their COVID-19 vaccines,” wrote AAP president Lee Savio Beers in an Aug. 5 letter to the FDA’s Woodcock. “In our view, the rise of the Delta variant changes the risk-benefit analysis for authorizing vaccines in children. The FDA should strongly consider authorizing these vaccines for children ages 5 to 11 years based on data from the initial enrolled cohort, which are already available, while continuing to follow safety data from the expanded cohort in the post-market setting. This approach would not slow down the time to authorization of these critically needed vaccines in the 5- to 11-year age group.”

In short: Expect a cascade of increased COVID vaccine eligibility among children under 12, beginning with the Pfizer vaccine, within the next six weeks to two months. In the meantime, hold tight as medical officials parse the data and issue their formal decisions.