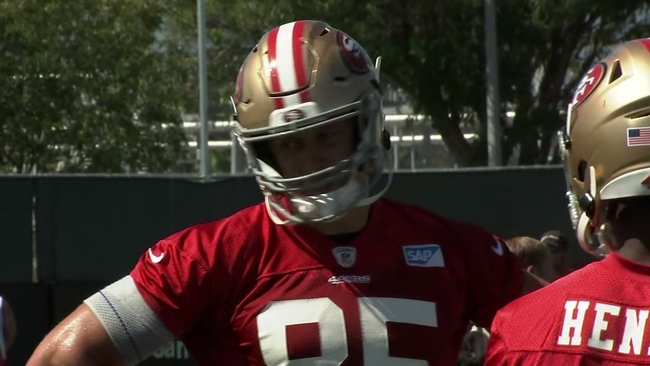 With an off-season like nobody has ever seen due to COVID-19, the San Francisco 49ers’ road to returning to the Super Bowl is undoubtedly different.

As players report to training camps across the league to get tested, health and safety will be more important than ever to begin, and hopefully complete, a full NFL season.

“There’s more to think about than usual. Usually we’ve had 30 days off and we are coming here and there is only one thing you can think about and it’s the only thing you should be thinking about at the time and that’s football,” said 49ers head coach Kyle Shanahan.

“But there is kind of this other thing that’s new that’s sitting there, that yeah but football doesn’t matter if you don’t handle COVID right.”

To date, 49ers General Manager John Lynch says no players have opted out of the upcoming season. Under the new guidelines, there will be zero preseason games this year, and with limited practice time until the scheduled regular season opener on September 13, there’s a lot of work to do.

“Everyone has the same rules, it’s our first time going through it. We got a plan, everything on the board on what we are going to do. But I’m not acting like that plan isn’t going to change, we are going to be ready to adapt to anything. You have to with the COVID stuff because you never know when you are going to lose people, but the practice stuff is going to be fun I think,” said Shanahan.

“So many people have been working their tails off to equip this place such that our players feel comfortable, their families feel comfortable and our staff feels comfortable. Does that assure us of anything, no, but sure allows us to mitigate any risk,” added 49ers general manager John Lynch.

Superstar tight end George Kittle is entering the final year of his rookie deal and a long-term contract remains a top priority.

“We don’t have to say how important George is to us. Not only is he the best tight end to me in the league but also the type of person he is. We are doing everything we can to get that done. I feel very optimistic about it, so hopefully something will happen sooner rather than later,” said Shanahan.

“There’s a great understanding that we are in this thing together. We are partners to try and get something done because it makes too much sense not to,” said Lynch.

The 49ers are set to open the regular season on Sunday September 13 when they host the Arizona Cardinals at Levi’s Stadium for a 1:25 PM kickoff.