Yes, that was really a five-second Reddit ad during the Super Bowl 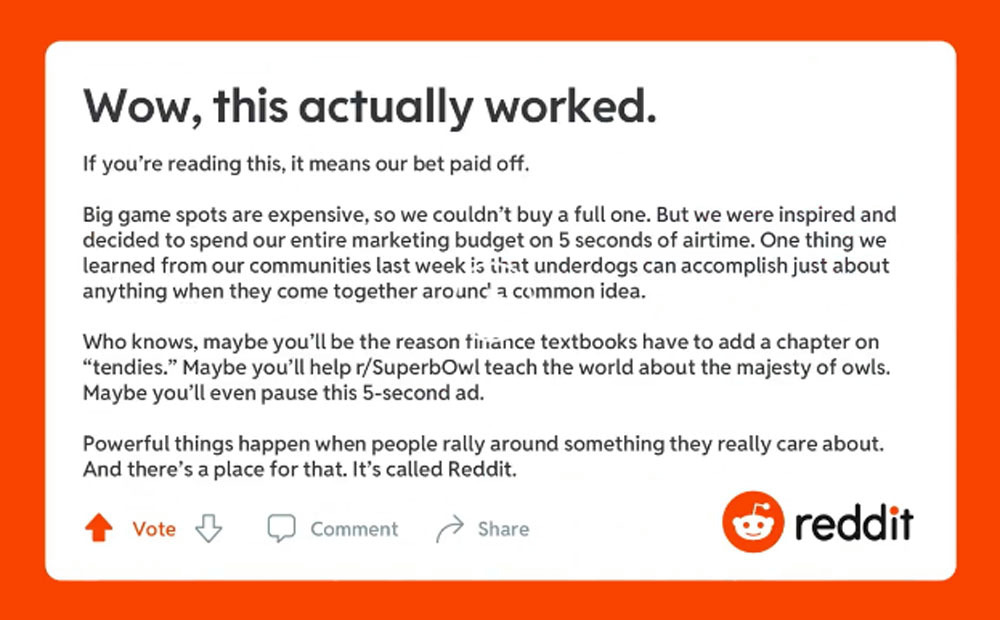 No, it wasn’t a glitch — for some Super Bowl viewers, a Reddit commercial really did pop up on the screen.

The spot, which was just five seconds, opened as if it were a car commercial, but then flashed to a test-pattern screen with Reddit’s logo, which was followed by a printed message.

The ad acknowledged that a viewer would have to pause the stream to read the message.

“If you’re reading this, it means our bets paid off,” it read. “One thing we learned from our communities last week is that underdogs can accomplish just about anything when we come together around a common area.”

The message goes on to refer to the upheaval on Wall Street after a Reddit army — from the WallStreetBets page — took on  pros by inflating the share price of GameStop.

It concludes: “Powerful things happen when people rally around something they really care about. And there’s a place for that. It’s called Reddit.”

Reddit said it spent the “entire marketing budget” on the ad, which the company’s Chief Marketing Officer Roxy Young said “was not part of our marketing plan.”

“But we were so inspired by the power of our communities in recent weeks that we rallied to pull it together in just a few short days in collaboration with our agency partners at R/GA,” she told CNN Business in an email statement. “I am really proud of what we were able to achieve with just five seconds and think it beautifully captures the heart of Reddit in our unique and brilliantly absurd tone.”