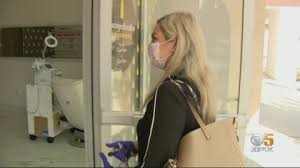 A group of business owners and at least a half dozen chambers of commerce across Santa Clara County are coming together to urge county leaders to relax COVID-19 restrictions or put the economy further at risk.

“Did they forget about us,” said esthetician Maya Mansour, who owns The Original Facial Bar in Willow Glen.

Mansour was set to hold a grand opening for her second location in Cupertino earlier this year when the county announced its shelter-in-place order. For the last six months, Mansour said she’s wondered when estheticians in Santa Clara County could work again.

However, under the order, medical spas are allowed to reopen. Mansour argues that medspas provide the same facial services that estheticians perform.

“Perhaps Dr. Cody can explain how lip fillers and botox are more essential than our services,” said Mansour. “Only Santa Clara County has prohibited estheticians from working for over six months.”

Fred Jones, legal counsel for the Professional Beauty Federation of California, said that Santa Clara County lags behind other counties that are in the same tier.

“Santa Clara is like this weird outlier,” Jones said. “I don’t get it, we don’t get it. It’s extremely frustrating.”

He said that the entire nail, hair and skin industry is trained and licensed by the state. But the county isn’t allowing the entire industry to reopen.

“It’s inappropriate, ignorant and I would go so far as to say callous misunderstanding of what we do in the beauty industry to keep our clients safe,” Jones said. “How many of those same health care professionals have missed a single paycheck.”

“The cold weather is coming, some of them have been operating outside to some degree, but it’s really just been a band aid,” said Silicon Valley Organization President and CEO Matthew Mahood. “These businesses are at the point of closing forever.”

The county released a statement to KPIX 5 and said that indoor dining is risky because it involves patrons taking off their masks. The county also said being in the red tier still means the presence of COVID-19 is “substantial.”

“When we ask in which tier we can reopen, the response is always the same, ‘We don’t know,’” Mansour said. “Our businesses are dying.”