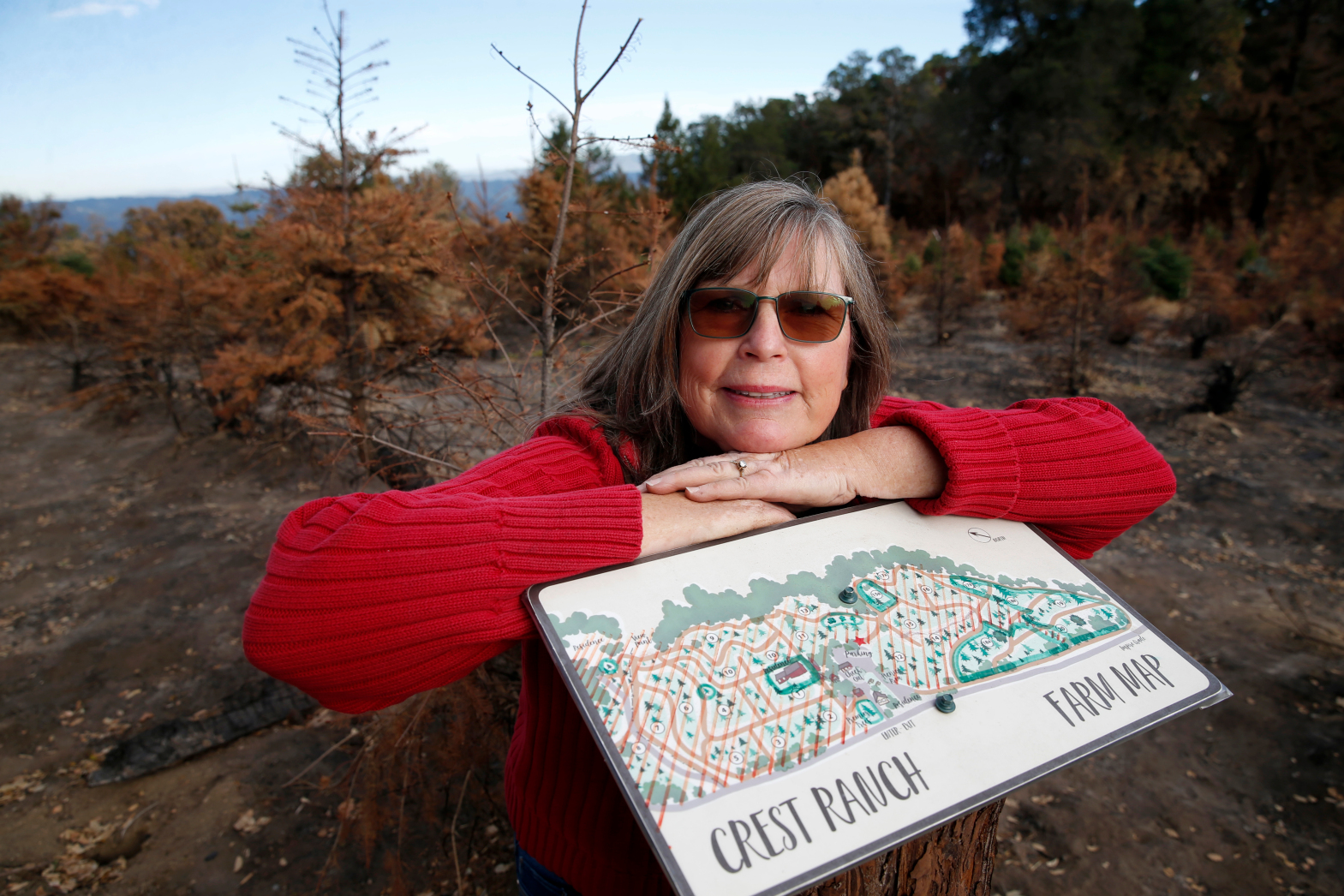 Since moving to the farm from Sacramento, the Morans had settled onto the property and built a home for their daughter and son-in-law, who helps manage the farm. Everything was lining up to be a good year and they were looking forward to Thanksgiving, when they would open for the season.

But on the morning of Aug. 16, lightning storms set off a series of fires that would eventually be known as the CZU Lightning Complex. The wildfires burned for 38 days, destroying 1,490 buildings and scorching 86,509 acres in San Mateo and Santa Cruz counties.

The Morans received a call around midnight on Aug. 18 telling them to evacuate. Ed Moran recalls seeing an ominous orange glow as the fire bore down on them. They headed for safety with Louise’s father, their daughter and grandson, while their son-in-law, Ben Gillum, stayed behind.

That first day, they learned the fire had missed them, sweeping by on the outer edge of the farm. The next day, the fire shifted course and burned through the heart of the property.

Gillum, who had been putting out fires on the property and in the compound where the families lived, was forced to evacuate. When they were able to return a few days later, the Jensen home and about 85 percent of the trees had burned. They were lucky, Moran says, that the other homes were spared.

It’s been hard to live with the destruction, he says. The trees were not insured, and while they plan to replant, the farm could take years to recover. Depending on the variety, it can take 4 to 15 years for the trees to mature. They also lost miles of drip irrigation that will need to be replaced and reinstalled.

The tragedy has provided some bright spots, however. The Morans calculated the inventory they had left, augmented it with 250 cut trees purchased from an Oregon farm and decided they could open the farm for just three days in late November.

They awoke on Thanksgiving morning to find 15 to 20 cars already lined up outside the gates.

“A lot of families have been coming here for years,” Moran says. “Some of them for 60 years or more. It’s a wonderful tradition for them and it brings such joy to us.”

The fire and the COVID-19 restrictions also have given them space to rethink their parking and picnic areas, something they had been wanting to do for a while anyway. With those improvements, Moran says, they expect to provide an even better experience for the tree seekers.

The community has come out in full support of the farm. Friends set up a Go Fund Me account, and customers have added messages of encouragement on Crest Ranch’s web page, www.crestranch.com, recounting their long traditions.

“Our family has been coming to Crest Ranch,” one family posted, “to choose our Christmas trees since 1974, starting the year after we married. Adding children in 1980, 1981 and 1983. And continuing the tradition adding our children’s spouses in 2007 and 2008, and now a third generation, adding our grandchildren. We’ll be coming up tomorrow, with all three of our kids (and) their families. Thanks for providing a family tradition for us. God Bless!”

“We have been coming to Crest Ranch every year since 1980,” another family wrote. “It is so much a part of our holiday tradition that it is considered the first Christmas present we give to each other every year… We live close by in Boulder Creek, but consider ‘going to get the tree’ one of the best trips of the entire year. Thank you. It wouldn’t be Christmas without you.”

The Morans say they have been touched by the outpouring of love and support. While it might be easier to cut their losses and move on, they are determined to keep going.

“We have a strong feeling about the property,” Moran says, “that it needs to continue to be a tree farm.”