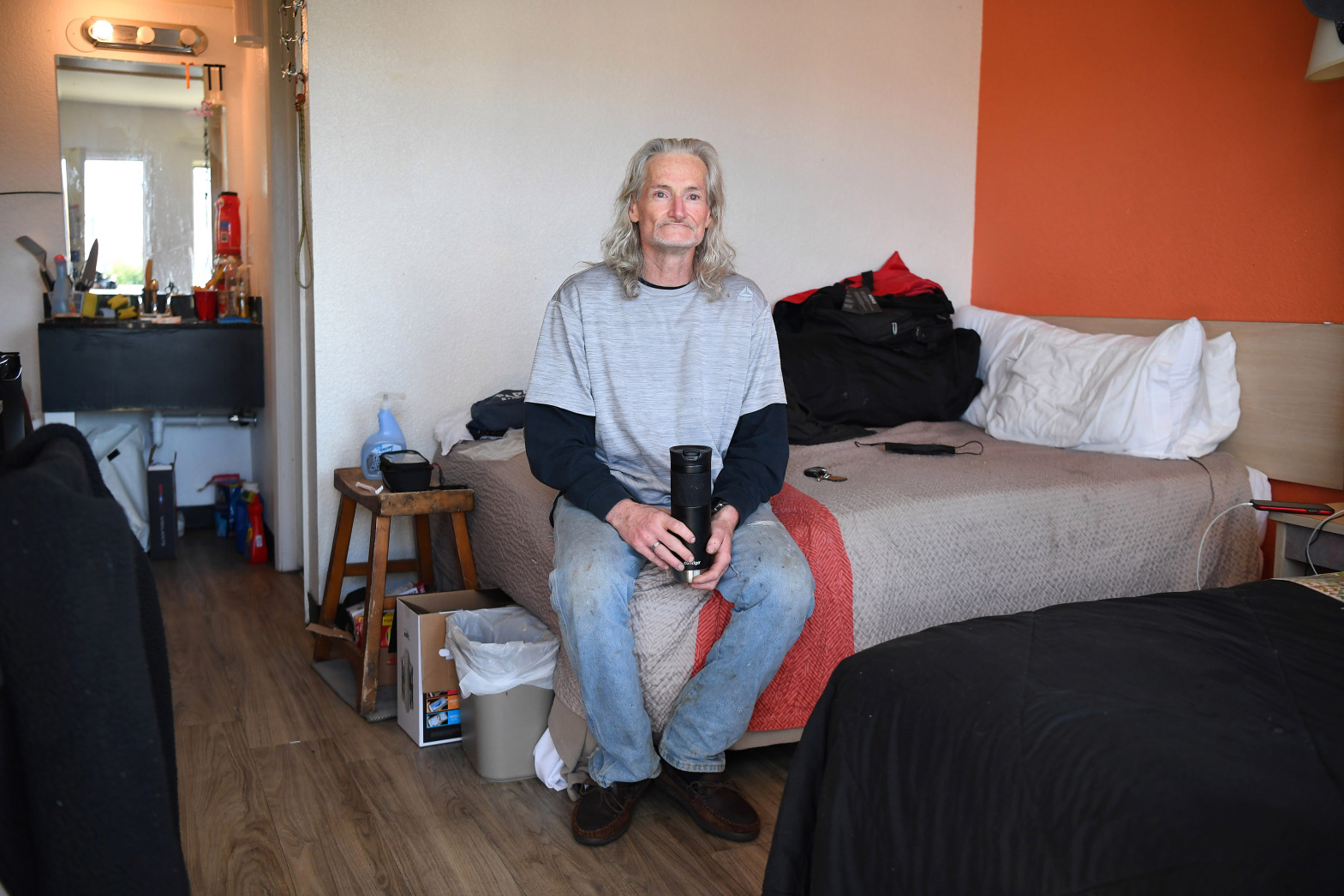 After spending years in and out of homelessness and prison, Randy Scott was living beside a creek in San Pablo last spring when he was offered a motel room.

Eight months later, he’s an example of the good that can come from Project Roomkey — the statewide effort that has sheltered thousands of unhoused people in hotels and motels during the COVID-19 pandemic. He landed a job, got a driver’s license and a car, and opened a bank account.

“I’m more with the program now than I’ve ever been in my life, to be honest with you,” Scott, 56, said from his room in a Motel 6 in Pittsburg.

More people may soon get the same opportunity, thanks to President Joe Biden’s recent orderextending federal funding for the program. Bay Area counties — which already have put up several thousand unhoused people in hotel rooms — are looking into extending hotel contracts, moving more people in and opening additional rooms. That’s music to the ears of activists who worried about shutting the hotel programs down even as COVID-19 continues to infect and kill at alarming rates.

“We’re still in a surge in the middle of really cold winter months,” said Vivian Wan, chief operating officer of Abode Services, which runs Roomkey hotels in Alameda and Santa Clara counties. “And I’m really excited that we’ll be able to potentially keep some of these hotels open for longer.”

Under former President Donald Trump, the Federal Emergency Management Agency reimbursed counties for 75% of the cost of leasing hotel rooms for unhoused people 65 and older or with health conditions that made them vulnerable to coronavirus. Counties used federal CARES Act funding to help cover the other 25%, but as that expired at the end of last year, some Bay Area officials began moving to close the hotel shelters, worried they’d be left on the hook for massive bills.

Adding to the uncertainty, counties had to reapply for the funds every month, which opened up the possibility that they’d be cut off at any moment. FEMA changed that requirement in December and promised to continue funding the rooms until the pandemic is over — but that vague terminology left counties unsure what qualified as the “end” of the pandemic.

In one of Biden’s first actions as president, he upped the FEMA reimbursement to 100% and extended it through Sept. 30.

“What that does for our budget is incredible,” she said during a news conference.

As a result, Breed directed her staff to look for additional hotels the city can consider adding to its Roomkey roster.

Contra Costa County already planned to keep its four Roomkey motels open through June — including Scott’s — but thanks to Biden’s order, now is looking at extending that timeline even further.

Alameda County was shutting down its Roomkey program in two hotels — one in Newark and one in Berkeley — when Biden signed the order. Now those closures are on hold while the county “feverishly” works to determine whether it has the resources to extend those and other hotel contracts, said Kerry Abbott, director of the county’s Office of Homeless Care and Coordination.

The problem is Biden’s order didn’t come with additional funds to move more people from the hotels into permanent housing.

“We want to make sure we’re not put in a position where we have to open hotels and then close them without having identified housing for people,” Abbott said.

Counties and nonprofits already are working to find long-term homes for their motel guests, but housing is notoriously limited in the region.

As of last week, Abode had moved 146 people out of the SpringHill Suites motel. Out of everyone who left, 68% moved into permanent housing, and 8% moved into temporary housing. But another 16% remained homeless, returning to emergency shelters or the street. Throughout Alameda County, 341 Roomkey participants had found permanent housing as of Friday.

San Francisco has promised to find housing for everyone who entered a Roomkey hotel before Nov. 15 — but not for guests who checked in later, including those who may be brought in as part of Biden’s expansion.

“As much as we would like to offer housing to every single person experiencing homelessness, we simply do not have the housing resources to do so,” the city’s Department of Homelessness and Supportive Housing wrote in a recent memo about Biden’s executive order.

Despite the housing challenges, Wan hopes Abode can keep its hotels open at least until everyone in them is vaccinated.

“It’s just really hard to think about how we’re going to get them vaccinated if they’re not inside somewhere,” she said.

And if the hotels stay open, she’s hopeful they’ll start accepting new guests — something they haven’t done in Alameda County since Nov. 1.

When Scott first walked into his motel room in May, what he was most excited about was the bathtub.

“I must have spent two weeks in that bathtub, I swear,” he said. “I kept on filling it up, it would get cold, I’d fill it up.”

But he knows a motel room on its own isn’t enough to turn someone’s life around. For him, many factors converged at once — he found a job helping other unhoused people through Safe Organized Spaces Richmond, he got a car donated by a good Samaritan, and he fell in love. But having a warm, dry, private place to sleep helped him hold it all together. It gave him a new perspective, allowing him to realize for the first time how poorly he’d been living before. It allowed him to let go of his old life.

“The creek is not an option for me,” he said. “I do not want to go back to being homeless anymore. Never again.”