Los Gatos: With houses on verge of going up in North 40 site, residents mount a last stand against controversial project 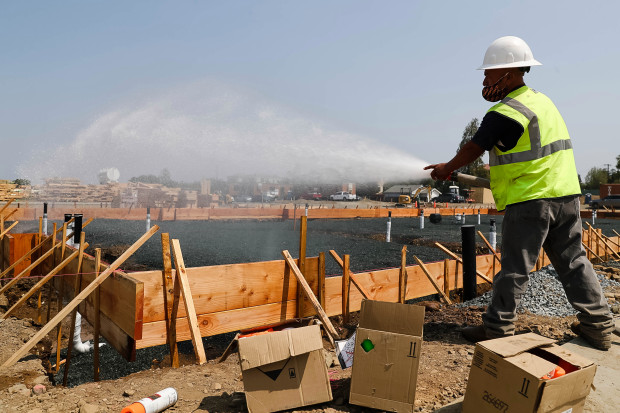 New roads have been paved and the frames of model houses are about to sprout up from an old walnut orchard at the interchange of Highway 17 and Lark Avenue, but the controversy that for years stalled the planned “North 40” development has returned with a vengeance.

And the project, which weathered numerous public hearings and lawsuits over several years before being narrowly approved, now faces another roadblock.

Instead of houses, the battle this time centers on the size of the planned parking garage for a market hall building designed to resemble Los Gatos’ old-town charm, where a variety of artisan foods will be served.

The developer, SummerHill Homes, wants to eliminate an approved underground level of the four-story parking structure, saying its 127 spaces aren’t necessary and admitting the modification will save it about $4 million.

The building’s previous developer, Grosvenor Americas, planned to use the extra parking for the second phase of the project, according to SummerHill.

Asked about the reason for the extra parking, Steve Buster, a senior vice president with Grosvenor, wrote in an email Wednesday that his company “worked with and listened to the community over several years and agreed to the underground parking structure during the entitlement process.”

SummerHill president Robert Freed said his project is completely independent of any future development and that Phase 2 parking would have to stand on its own.

Grosvenor retains the rights to North 40’s second phase, which covers about 20 of the property’s approximate 44 acres, but has not submitted an application to the town nor does it have preliminary plans, according to Buster.

“Once we formally commence the entitlement process, we will first be reaching out to the community and stakeholders for their feedback on potential land plans and uses,” Buster said.

SummerHill Chief Operating Officer Chris Neighbor said construction on Phase 1 — which will include 253 for-sale housing units, 50 affordable senior units, retail shops and the market hall — began a couple of weeks ago and should take three or four years.

“We’ve made a lot of great progress,” Neighbor added. “We have broken ground. We have our first phase paved. We have our model homes under construction. We are moving forward with permitting with market hall and everything else.”

But SummerHill’s bid to remove a parking level from market hall lit another charge into residents, particularly those who live near the site. They contend SummerHill is trying to pull a fast one and that elimination of the underground parking level will send the garage’s overflow vehicles onto nearby streets and clog traffic.

“Put simply, they are trying to weasel out of their commitment. Don’t let them!” organizers of a Los Gatos-resident Facebook page dubbed “Town not City” posted.

Travis Engelman, who lives across the street from the project, was among some 50 residents who submitted emails urging the planning commission to reject SummerHill’s parking proposal.

Engelman said while he was among the few in his neighborhood who supported the controversial project, he can’t get behind less parking.

“It will cause strain on the neighborhood, and it will also make the actual development less attractive commercially, less density of people, less community feel, less activities and therefore less retail,” Engelman told this news organization.

This squabble is nothing new to the North 40 project. Controversy has seemingly followed it every step of the way. In 2016, the project appeared dead when the town council voted 3-2 to reject Phase 1 of the application, with the majority claiming it did not comply with the town’s specific plan.

They noted the 49 low-income senior housing units proposed were far fewer than the 156 very low, 84 low and 30 moderate pricing units envisioned by the specific plan.

The developers sued, and Santa Clara County Superior Court Judge Drew Takaichi in June 2017 ruled in their favor, saying the town reviewed the specific plan through a subjective rather than objective lens, Takaichi ordered that the application be reconsidered.

Less than two months later, the town council narrowly approved the development, with three yes votes, one no vote and one abstention.

SummerHill, which already had been chosen to build the homes, took control of the market hall building from Grosvenor Americas in spring 2018, paying a reported $8.8 million to Grosvenor in what Freed this week described as a “complicated buyout structure in our agreement.”

Since the buyout, SummerHill has tried to check off what Freed described as about 125 conditions of approval and offsite improvements to move the project forward — among them road widening and installation of medians and traffic signals to improve the flow of traffic.

Because SummerHill chose to stagger those tasks, the parking issue is just being raised now, Freed said.

The proposal to remove the underground parking level was scheduled to be addressed at a planning commission meeting last week.

But it was delayed until Sept. 9 because commission members said the wildfires prevented some residents from participating in the virtual meeting. Commissioners also wanted an opportunity to visit the site after reading correspondence from residents suggesting that the builder was already constructing the market hall garage under the assumption the parking modification will be approved.

“I attempted to visit the site, but it was locked,” commissioner Matthew Hudes told his colleagues. “Since the correspondence came in last night and at noon today, I did reach out to staff and contacted the construction manager. But there wasn’t time to do a site visit. I think a visit to the site is in order.”

Freed took offense to the suggestion that the garage is already being built, saying, “I don’t run an amateurish company. That’s just foolishness.”

The town requires that the market hall building provide at least 124 spaces, Freed said. If the garage is reduced to three levels, it would provide 176 spaces.

In addition to saving his company $4 million, Freed said the garage alteration would minimize the inconvenience to the public during construction.

“There’s going to be 1,800 truckloads of dirt that we’re going to have to haul off that site. The traffic impacts are significant,” Freed said. “To build parking that is not needed — that everything about it is wasteful and if the community would take a step back and look at it from the sense of fairness and reasonableness — then it should be approved. But that is not the history of what goes on there.”

Freed said he is not confident that town officials will approve his request because “there is a perception by some members of the community, in particular those that live close by, that somehow people are going to end up parking in their neighborhoods to come to the project, which if you look at the physical distances, that does not make sense.”

So as he has done many times, Freed awaits a decision.

“I have been in the business for a long time,” he said. “You either learn to be patient or you get out of the business. You just can’t control the pace of it. Just when you think you can, somebody throws another roadblock at you.”