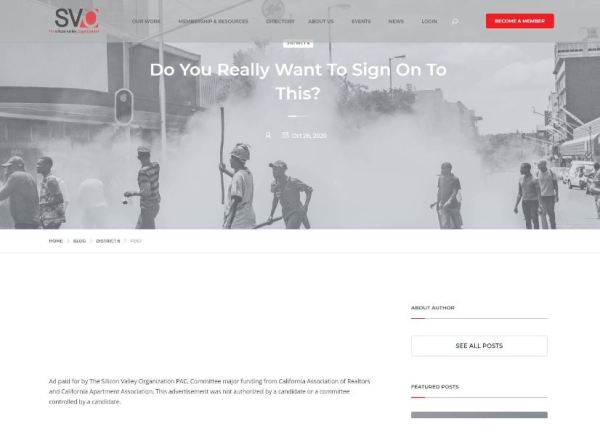 Less than 24 hours after San Jose’s lead business advocacy group was blasted for posting a racist attack ad on its website, the organization placed its CEO on administrative leave, halted all campaign activities and hired a third-party investigator to determine how and why the ad made its way onto the website.

“An image was recently posted on The Silicon Valley Organization website that was blatantly racist, completely inappropriate and unacceptable,” Executive Vice President Madison Nguyen said in a statement. “The Board of Directors is moving quickly and effectively to understand how this could have occurred, and to ensure it never happens again.”

At issue is a photo used by the Silicon Valley Organization PAC — the campaign arm of the region’s largest chamber of commerce that supports business-friendly candidates — as part of an attack ad against San Jose District 6 Council Candidate Jake Tonkel, who is running against SVO-backed incumbent Dev Davis.

The black-and-white image featured a group of Black men rioting in a street and on top of the photo, the ad read: “Do you really want to sign onto this?” The photo was published online in 2018 by South African photographer Pawel Janiak and was not taken in San Jose, though it’s unclear where it was shot.

The SVO took down the photo early Tuesday and issued an apology in the afternoon, acknowledging that the ad was “insensitive and racist.” The organization would not identify the individual responsible for posting the photo and only referred to the employee as a “web administrator.”

After a meeting with the executive board Wednesday morning, Nguyen issued a statement saying that there was “no excuse” for the image.

“We are horrified by this image as it does not represent the values of the organization, the leadership, the Board of Directors or our members,” she said. “For that, we apologize.”

The organization, according to Nguyen’s statement, has hired a “qualified third-party investigator” to look into the incident and any “inherent cultural issues in the organization that might have contributed to this disgraceful post, along with recommendations for necessary changes.” It is unclear at this time whether the findings would be released to the public upon the culmination of the investigation.

By Wednesday afternoon, a landing page on the SVO’s website that used to feature a short biography of the organization’s CEO and President Matt Mahood read “Page not Found.” The executive board has not stated how long Mahood’s administrative leave will last, whether he will be paid during that time, or what role if any he had in the ad.

Mahood did not return multiple requests for comment on Wednesday.

The announcement from SVO’s executive board came shortly after two prominent SVO board members, Joshua Howard and Anil Babbar of the California Apartment Association, announced their immediate resignation, citing their disappointment in the “inappropriate and blatantly racist imagery that was posted on the SVO website.”

“This action and its message were never discussed or vetted by SVO PAC members,” the pair wrote in a letter regarding the ad. “It does not reflect the values of our community or that of the California Apartment Association and its goals of promoting all local, state, and federal fair housing laws for all residents without regard to color, race, religion, sex, marital status, mental or physical disability, age, familial status, sexual orientation, or national origin.”

As of Wednesday, the Mercury News was a member of SVO, with a seat on the board of directors. “We are waiting for more information before making a decision on the future of our membership,” said Sharon Ryan, president and publisher of the Mercury News.

This is not the first time the SVO has been accused of funding racist attack ads. In previous races, the organization faced public scrutiny for darkening photos of current council members Sylvia Arenas and Sergio Jimenez, who are both Latino.

And now civil rights leaders, nonprofit organizers and labor groups are coming together to call for Mahood, the organization’s CEO, and executives in charge of the SVO PAC to step down permanently.

“Everyone is sick and tired of the SVO doing this. People are starting to see the trend of the SVO and its racist behavior, and it’s all under the same leadership,” Rev. Jeff Moore said in an interview Wednesday. “We are not going to tolerate this from any leaders in the city of San Jose. They need to go.”

In the November 3 race for the open District 6 seat on San Jose City Council, both candidates — Tonkel, a biomedical engineer and green party candidate and Davis, the current District 6 councilwoman and a nonpartisan — are White.

But Tonkel has come under fire from groups like the SVO for his participation in demonstrations that took place last summer in the wake of George Floyd’s killing by a Minneapolis police officer, including a video posted on his campaign Facebook pagethat included demonstrators holding up signs with the acronym ACAB, which stands for “all cops are bastards” and his support for the Green New Deal.  The SVO has also falsely claimed that Tonkel wants to defund the San Jose Police Department by 80%, which the District 6 candidate says he has no plans to do.

In its apology, the SVO stated that “the person who posted the picture was attempting to demonstrate the consequences of cutting the police budget by 80%, but the image chosen was offensive and should not have been posted.”

Councilmember Davis quickly denounced the SVO’s ad late Tuesday and removed the organization from the endorsements page on her website.

“I am angry and shocked by the horrible graphic and truly disappointed by the very poor judgment and racist picture the SVO posted,” the councilwoman wrote in a statement. “I denounce this in the strongest terms and am ashamed of the past support I have received from them.”

Tonkel, on Wednesday, said he was “grateful to Councilmember Davis for her statement condemning the SVO’s tactics” and encouraged other elected officials and candidates to follow in “distancing themselves from the SVO, who carries a toxic history of political activity against low-income people and people of color.”

“Our campaign has been talking about the unjust influence of money in politics and the damage it causes to our community since the beginning,” he said in a statement. “I am disappointed but not surprised that this influence continues to be pervasive and destructive in this election cycle, but we should use this as an opportunity to learn, pivot, and take concrete steps to rebuild trust in our local democracy.”

As of Wednesday, the SVO PAC had spent more than $500,000 in campaign ads and mailers for the two races for open seats on the city council in District 4 and District 6. Earlier that day, prior to halting its campaigns, the organization filed reports indicating that it spent about $25,000 in the past 24 hours in opposition efforts against Tonkel and District 4 Candidate David Cohen, who are both backed by labor groups.