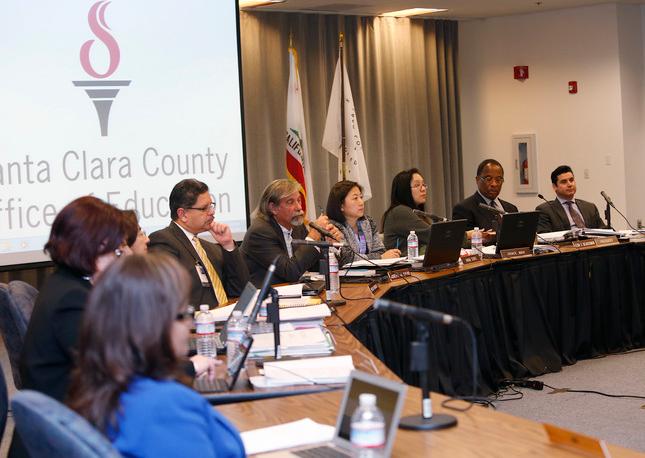 The contentious contest for three seats on the Santa Clara County Board of Education has turned into a proxy fight pitting charter school forces against an array of teachers unions in a campaign that has seen both sides spend enormous sums of money hoping for some clout at the table.

Twenty-one charter schools operating in the county today have been authorized by the education office alone, or half as many as those approved by the county’s numerous school districts.

That’s a trend unions are hoping to end by opposing three board incumbents who have been consistent votes for charter schools: Grace Mah, Joseph DiSalvo and Anna Song. To unseat them, they are aligning behind challengers Melissa Caswell, Ketzal Gomez and Victoria Chon.

Although the election campaigns of education board trustees typically cost around $25,000, a “financial arms race,” as one candidate put it, has opened up checkbooks for many times that amount in the contest for two of the three seats this year.

In the Area 1 race, 13-year board incumbent Mah, who is running against Caswell, has raised about $323,300 since the first filing period ended in mid-September. The Charter Public Schools Political Action Committee contributed $75,000 toward her campaign on Sept. 28 and $105,000 on Oct. 13, finance records show.

Mah also picked up local contributions of $20,000 from the Champions for Education PAC, whose members include directors of Bullis Charter School and other charters in the county, and $5,000 from the Santa Clara Charter Advocates for Great Public Schools. Bullis Charter had fought for years to establish a school at one of Los Altos School District’s campuses.

Caswell, a former Palo Alto Unified School District board member, meanwhile has raised about $180,000 since July, with most of that money coming in the past several weeks. Her largest contributors are the East Side Teachers Association PAC, which donated $30,400 on two separate occasions. She also picked up several individual donations totaling $50,000 from publicly outspoken anti-charter advocates, including many who have long opposed the Bullis Charter School in Los Altos.

Despite all that money, neither candidate identified themselves to this news organization as pro- or anti-charter.

Caswell said in an interview she’s been “blown away” by the amount of money Mah has raised.

“The people that gave me money have particular interests in certain things but I wouldn’t be a rubber stamp for or against (charter schools). It’s about how it impacts the community,” Caswell said. “I want people to see me as a fair decision-maker who is objective. It doesn’t surprise me that people have been unhappy with Mah’s record but my campaign isn’t really about being anti-charter.”

Caswell said she’s disappointed the race has not been about the issues and wishes she had been “more sophisticated” in her approach to get out the vote for her. She said she expected some outside contributions but not as much as has been flowing in from all over the state.

“All I can say is I’m running with the intention to serve our kids, so to make this about charters is very disappointing,” she said. “Mah has not been doing much to support things that are important to the teachers. We don’t have a good plan for distance education support. There’s all sorts of people who can talk to you about my history working through crises, so that’s why this is is so disappointing.”

Mah said in an interview she too was “alarmed” by the amount of special interest money in the race, but noted it was a response to Caswell having raised more than $90,000 in August. That is when the “financial arms race started,” Mah said.

“She (Caswell) came out so strongly with anti-charter supporters that charter school associations recognized that and saw it for what it was and offered to donate to my campaign,” she said. “I couldn’t turn it down because as soon as I accepted even one dollar I was going to get slammed for taking PAC money.”

Charter school organizations likely are contributing so much money to her campaign because they “looked at the whole slate of opponents and saw it as a real threat to charter schools in general,” Mah said.

“If you have three anti-charter people win these seats, they take it very seriously,” Mah said. “I don’t have a strong charters for everybody all the time. I feel that good schools are required for students to be able to excel. If the school is a charter, then let it happen. If it’s a local public school, then that’s fantastic too.”

The same PAC that gave so much support to Mah also pitched in $110,000 for the campaign of Area 4 incumbent Joseph DiSalvo, who is running against former charter school student Ketzal Gomez of San Jose and Lucia Garcia, who has not raised any money.

DiSalvo has raised almost $200,000 overall, including thousands from individual donors and $10,000 from the pro-charter Champions for Education PAC and Santa Clara Charter Advocates PAC.

Gomez raised $63,010 since July 1, mostly from individual donations. More than half the total, or $36,896, came in the past month. Her largest donor was the East Side Teachers Association PAC, which gave $20,543 in two separate donations.

Though he said it’s “abhorrent” that so much special interest money was flooding his race, DiSalvo added it was “not a contradiction to me” to accept PAC money as it is the “only way I can keep my voice active.”

“I’ll sell out if that’s what needs to be done,” he said. “We have to do something dramatic to change the equation. It’s easy to me to take what I abhor to keep my informed voice out there, whether in written form or on the dais.”

DiSalvo has been embroiled in a legal fight with some board trustees who censured him on July 15 for alleged gender bias. He subsequently filed a complaint in the U.S. District Court for the Northern District of California claiming the board majority violated his rights to free speech. Mah and Song voted against the censure.

“This was totally a political ploy to get me not to run,” DiSalvo said. “(Congresswoman) Zoe Lofgren, before she endorsed me, said she viewed everything and determined on her own as one of the most powerful Democrats we have in Santa Clara County that there’s nothing there.”

Gomez, who attended Downtown College Prep in San Jose, said she was “disgusted” by the amount of money her opponent has raised and is “very surprised of how much I’ve been portrayed as this anti-charter candidate.”

Gomez said said although she’s generally supportive of charter schools, she doesn’t think they should make it so hard for teachers to join unions.

“People who are on the board shouldn’t look at it as anti- or pro-charter. I’m not going to say I’m anti-charter,” she said. “I’m not trying to be one-sided or a one-issue candidate. The amount of money coming in is disgusting and it’s wrong.”

She said she’s focusing her campaign on other means of engaging voters that doesn’t involve glossy mailers and ad buys.

“We can spend $15,000 on a mailer or engage our community through text banking and phone banking and lit dropping,” Gomez said. “If your method is not to use people power, of course you need more money.”

Significantly less money has flowed into the Area 5 race, campaign finance records filed to date indicate. Incumbent Anna Song’s campaign filings were not available and her opponent, Victoria Chon, has raised $30,683 since January.