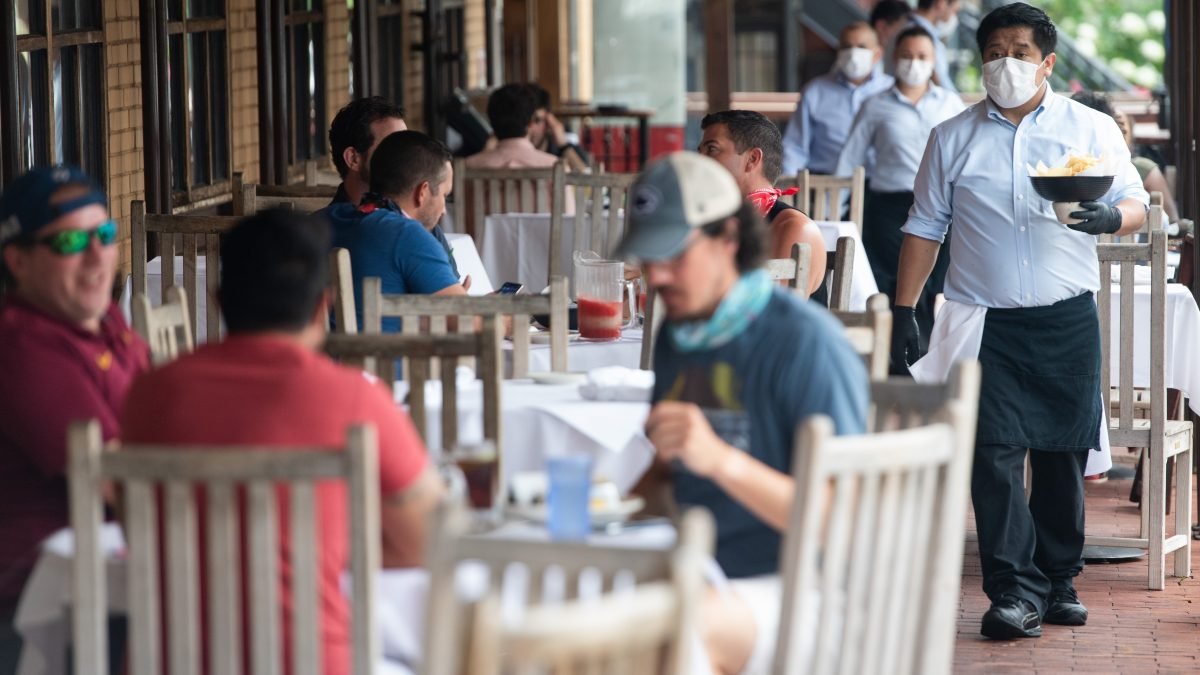 During the darkest days of the coronavirus pandemic, Martha Medina would occasionally slip into her shuttered store on Los Angeles’ oldest street to ensure everything was secure.

Colorful folklorico dresses from each of Mexico’s 32 states lined the walls. Black charro suits worn by mariachis and adorned with ornate gold or silver trim hung from a rack in the back. Brightly painted Dia de los Muertos folk art skulls and figurines were safely locked behind a glass case.

Missing were customers, employees and happy pulses of traditional Latin music such as cumbia, mariachi and son jarocho, the Veracruz sound.

“Those days I felt very sad,” Medina said. “I had the feeling I would never open the shop again.”

Back in business now but with government-imposed restrictions, Medina and other merchants and restaurateurs on Olvera Street — and those around the state — are still struggling and facing an uncertain future even as California prepares to fully reopen its economy Tuesday for the first time in 15 months.

“My only hope is to continue day to day,” said Medina, who remains optimistic. “I don’t expect normal. I expect semi-normal.”

California imposed the first statewide shutdown in March 2020 and is among the last to fully reopen, though businesses have operated at reduced capacity for months. It was an early model for how restrictions could keep the virus at bay but later became the U.S. epicenter of a deadly winter surge that overwhelmed hospitals in Los Angeles and other areas.

More people tested positive for the virus in California — about 3.8 million and counting — and more people died — 63,000-plus — than elsewhere in the country. However, the nation’s most populous state had a lower per capita death rate than most others.

For the past couple months, the state has experienced the lowest — or some of the lowest — rates of infection in the U.S. Its vaccination level also is higher than most other states; two-thirds of those eligible have gotten at least one dose.

Gov. Gavin Newsom long ago set June 15 as the target to lift restrictions on capacity and distancing regulations for nearly all businesses and activities. But reopening doesn’t necessarily mean people will immediately flock to places and events they once packed.

Olvera Street has long thrived as a tourist destination and symbol of the state’s early ties to Mexico. The location where settlers established a farming community in 1781 as El Pueblo de Los Angeles, its historic buildings were restored and rebuilt as a traditional Mexican marketplace in 1930s.

As Latinos in California have experienced disproportionately worse outcomes from COVID-19, so too has Olvera Street.

In addition, the location does not lend itself to options that gave other businesses a chance, such as curbside pickup or takeout meals. While the city, which owns the property, has forgiven rent through June, owners are still hurting.

Most businesses have reduced hours and closed a few days a week, said Valerie Hanley, treasurer of the Olvera Street Merchants Association Foundation and a shop owner.

“We’re not like a local restaurant in your town,” Hanley said. “We’re one of those little niche things. If you can’t fill the niche with the right people, we’re in trouble.”

Edward Flores said he has gone deep into debt running Juanita’s Cafe, a small food stand in his family for three generations. He doesn’t expect a turnaround until next year.

“I didn’t have a doomsday thought. I just was flabbergasted,” he said. “I thought, ‘What an incredible waste of time.’”

On a recent Friday, the smell of frying taquitos filled the air as he served a steady trickle of afternoon customers stopping for a quick bite.