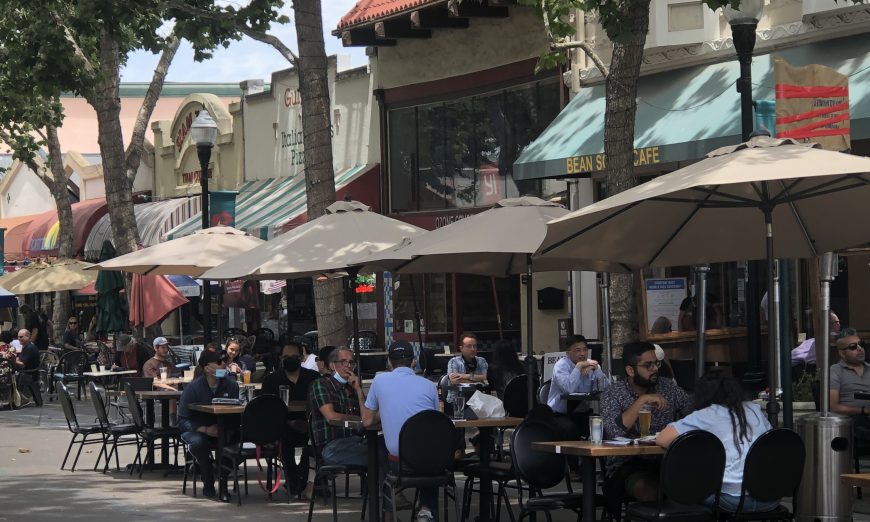 A major change has happened in Downtown Sunnyvale. The City closed Historic Murphy Avenue between East Washington Avenue and West Evelyn Avenue earlier this month. The street is now pedestrian only and restaurants will be allowed to extend their outdoor seating further into the street.

Sunnyvale Mayor Larry Klein says he’s happy it’s finally happening. He says it’s an idea he tried to get businesses behind before, but with no luck. In January, he brought the idea up with the Downtown Association.

“Initially, I was looking at trying to do it on Saturdays because in the summertime we had Saturday market in the morning and we had jazz on Saturday night,” said Klein. “We were doing it for eight weeks out of the year and anyway, so trying to say this would be a positive effect on a year-round basis was my first goal.”

Both sides were talking about the possibility of closing Murphy Avenue when COVID-19 hit.

“After several months of pandemic and sheltering in place, the county and the state came back that the first thing would be outdoor seating for restaurants,” said Klein. “[The Downtown Business Association] then put in a formal request to the City to close down Murphy Avenue, at least for the next six months.”

For the most part, the response to the plan from local businesses and the community has been positive.

“We [were] at Dishdash yesterday for my birthday and were so impressed; felt very safe. Thank you!” Jeanette Lomori posted on Klein’s Facebook page.

“Hooray!!! This is wonderful news. Since the first day I walked Murphy Street I’ve wondered why it was ever open to car traffic. This is a positive step for our town, and hopefully a permanent one,” Kristine Morrissey Zehner posted on Klein’s Facebook page.

The mayor also hopes the change will become permanent.

“I think the businesses will figure out that it really doesn’t hurt sales at the end of the day and brings more people downtown in a safe environment for families especially,” said Klein.

Sunnyvale will keep Murphy Avenue closed for the next six months and then revisit the plan to decide whether or not to extend the closure.

The City is also trying to make it easier on restaurants throughout the city that did not have outdoor seating initially. It has created guidelines and permitting procedures so restaurants can apply for temporary outdoor dining areas on private property. The permit would allow restaurants to use existing parking for outdoor dining.