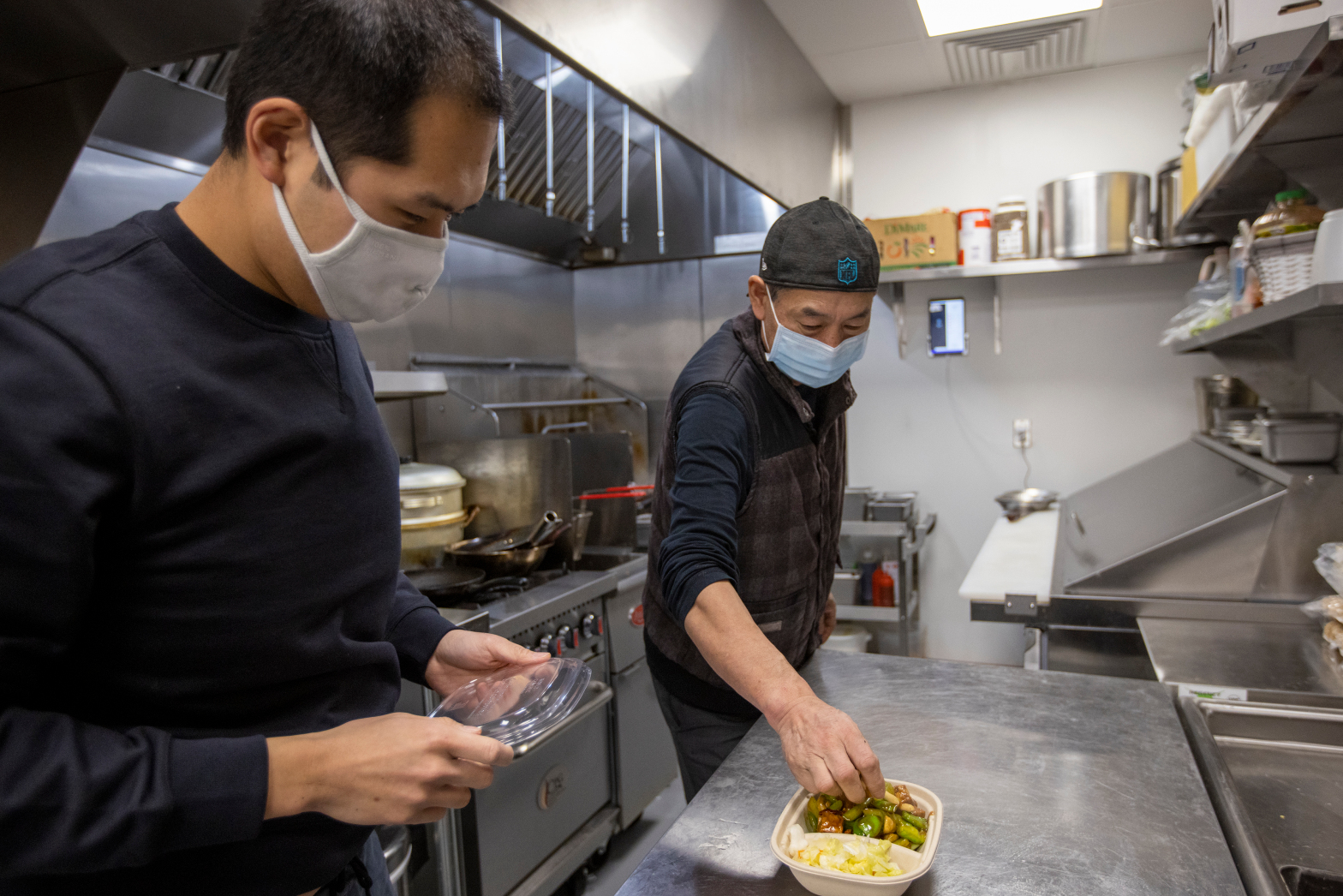 The pandemic and stay-at-home orders have forced thousands of financially dried up California businesses to shut down, but for Dan Zhao, they became the reason to start a new one.

“Before the pandemic, I just had a regular job,” said Zhao, a product manager at a San Francisco-based software company. But when his father, Keguang, lost his job as a cook in a Los Angeles Chinese chain restaurant in March, Zhao started to worry about him, alone and on unemployment.

So, in October — amid rising coronavirus cases and a 9.3 percent unemployment rate — father and son opened their delivery-and-pick-up only restaurant in Oakland’s Fruitvale neighborhood. Now, Zhao’s got two jobs: product manager by day and owner of Cozy Wok, an Oakland-based vegetarian Chinese restaurant, by night and on weekends.

“It’s about a $35,000 investment, kind of all of my savings that I could use,” Zhao said. “For me, it’s about how to get past this hurdle of the pandemic with my family.”

Despite a grim economy, applications for new business licenses are on the rise: In California, 442,324 were filed in 2020, a 21.7 percent increase from the year before, according to an analysis of data that the U.S. Census Bureau developed with economists and the federal reserve. Across the U.S., about 4.4 million applications for new businesses were filed last year, compared to roughly 3.5 million in 2019, according to the same data, which is considered an experimental Census product.

Why are more people taking the plunge and launching ventures during a global pandemic? Experts aren’t sure. “It’s a significant increase,” said Mark Herbert, vice president in California for Small Business Majority, a national organization advocating for small businesses. “It’s something we’ve been tracking and we have more questions than answers at this point.”

Hilda Medina lost her $300-a-week gig as a babysitter at a Contra Costa daycare last March. When her husband lost his construction job a few weeks later, the family of four started lining up for free food at local community centers. That’s when Medina started thinking about desserts — more precisely, about how friends and family had always loved her Mexican treats. Four months later, she began selling her sugar-free, gluten-free breads and desserts for those with diabetes, allergies, or simply on a diet. “The main thing was to try and keep our family fed,” Medina said.

Now, Medina makes up to $1,200 on a good week with her business, Hilda Keto Cakes. She is among a large number of emerging entrepreneurs selling through social media apps like Facebook Marketplace and Instagram. “I consider this a business now,” Medina said in Spanish. “If there hadn’t been this pandemic I would have never dreamed I’d be able to do this. To make more money, and with my own business?”

Others who started new businesses had been carefully planning for years and ended up seeing opportunity in the pandemic.

Karim Mayfield, a former professional boxer turned businessman, had worked different jobs from reception to assistant manager at STIIIZY Mission Street, a San Francisco dispensary. In the spring, amid a tsunami of pandemic layoffs, he quit. Last Saturday, he opened Authentic 415, his own dispensary in Potrero Hill.

“It’s the best time for a cannabis club to open,” said Mayfield, who was raised in the Fillmore and had been working on his business plan for three years with the San Francisco Cannabis Equity Program, which helped him get licensed with a co-owner. Mayfield says the city is ripe for those wishing to start businesses. “The rents are dropping, for one, and there are opportunities for some good investments during this pandemic,” he said. “The city’s got grants, too.”

In the East Bay, the Oakland Black Business Fund has seen a rise in applications for grants from new businesses and people with side hustles, said CEO and co-founder Trevor Parham, adding that the fund helped 13 street vendors get licensed to sell at Lake Merritt last spring. While most COVID-19 state grant programs are geared toward helping existing businesses survive the economic crisis, Gov. Gavin Newsom’s budget this year waived the $800 franchise tax fee new businesses are required to pay.

Not that things have been easy: Registering a business, paying taxes and buying equipment, Zhao said, has been challenging. Initially, he said, business was very slow, but things eventually picked up. Last month, he hired Cozy Wok’s first employee.

“How many people get to work and hang out with their parent in their own business?” Zhao said. “I just always feel so fortunate to be able to do that.”