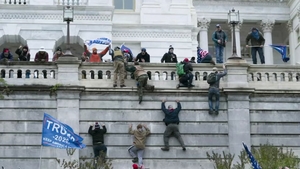 Several Bay Area lawmakers are reacting to the Capitol protest and shared their experience at the event that took place on Wednesday.

Representative Barbara Lee of Oakland reached for a gas mask underneath her seat as the angry mob stormed the Capitol.

“It was pandemonium in some respects, although we were very disciplined and followed instructions,” said Lee.

“I expected something and actually I wore tennis shoes to the hill,” she continued.

She says the response was shameful, disgraceful and inequitable.

Representative Zoe Lofgren says she was also concerned by the security response.

“We can’t allow terrorists to come in and invade the Capitol of the United States. It’s completely unacceptable,” said Lofgren.

Many are calling for President Trump to be removed from office.

“I think the President has indicated through his behavior that he is a threat to security of this country,” said Lofgren.

“On the one hand, it did feel surreal and shocking, on the other hand all of us saw it coming, this is so predictable when you look at everything over the last 4 years, especially everything that Trump has done to fuel this fire and set it in motion these past few weeks,” said Representative Jared Huffman.

“He needs to be removed right away and there’s only one way to do that the 25th amendment,” he continued.

Bay Area Rep. Ro Khanna (D-Santa Clara) was in Washington, D.C. on Wednesday as a mob of pro-Trump rioters stormed the U.S. Capitol. He described his experience being locked-down during an interview with ABC7 News anchor Reggie Aqui on “Midday Live.”

Rep. Khanna said he then went back to his office after he was given the OK to reenter the building and was sheltering there with the doors locked until about 10 p.m. and could hear the yelling and shouting from rioters.

When asked if he agreed with House Speaker Nancy Pelosi’s call to use the 25th Amendment to get President Donald Trump out of office, he said, “I do, let me tell you why. Yesterday, it was Vice President Pence who had the courage to call the National Guard and if the National Guard did not come… the Capitol police had been overrun and who knows what would have happened.

“The president failed to safeguard the American democracy yesterday and that’s why I think Pence needs to assume power. Now I support the Speaker and Majority Leader, whether it is impeachment or whether it’s the 25th Amendment but what really needs to happen is a group of Republicans like Mitch McConnell need to go over to the White House and demand Trump’s immediate resignation and say otherwise the votes are there for an impeachment. That’s what happened in Richard Nixon’s case and I hope that’s what will happen now.”