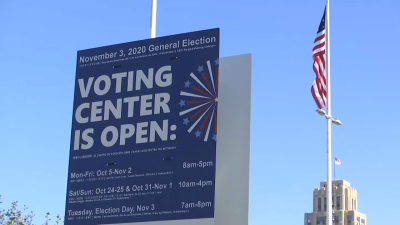 In San Francisco, tents set up outside City Hall are a clear sign the November 2020 election is near, as early voting opens Monday.

Rob Delong is waiting for his ballot. He said given the political climate in Washington, he’s even more interested to vote.

“I haven’t decided if I’m going to come down here,” he said. “I will probably just mail it in, I’m supposed to receive it this week.”

He said he’s ready to vote as soon as possible.

Many who are eager hope the feeling is widespread.

“I think a lot of people say that California is going to go for Biden so we don’t have to vote,” said one local resident. “I think we need to set as high a national vote total as possible to send a clear message of who the winner is going to be. So, I think everyone in California should vote.”

On the eve of early voting, Trump supporters rallied outside City Hall as the president continues to recover from the coronavirus. But questions are mounting about the impact on the election.

“I think there’s uncertainty, confusion and a lot of trepidation about what happens next,” said University of San Francisco Political Science Professor James Taylor. “Nationally we already have 3 million people who voted, normally it would not even be 10% of that.”

This year, every registered voter is being mailed a ballot because of the pandemic. For voters who have not yet received one, they should be arriving this week.