Want to give something to a homeless person? There’s an app for that 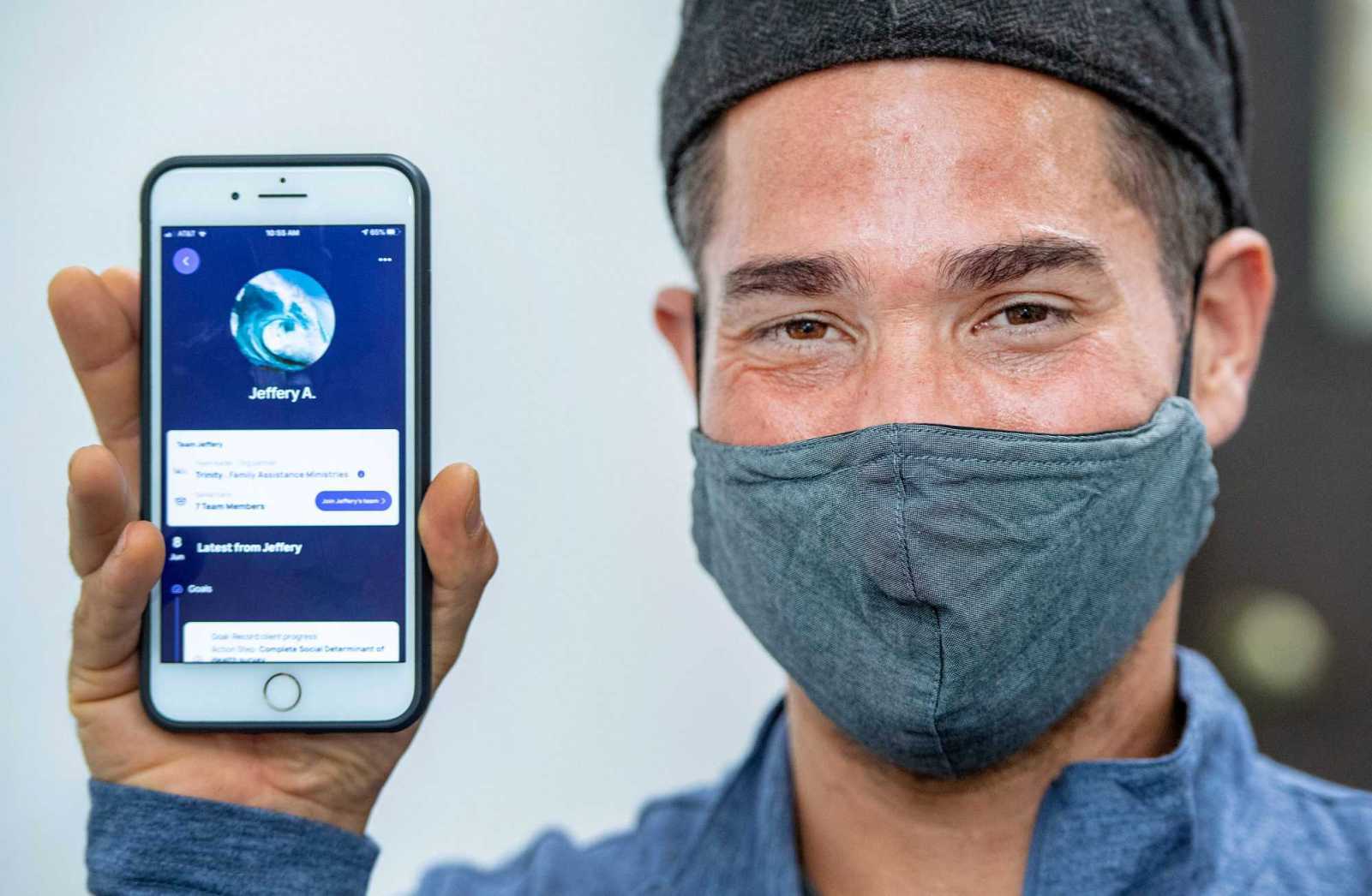 It shows their stories but not their full names.

While the identities of the homeless men and women is kept confidential, the sad truth of their circumstances is laid bare in a phone app operated in the palm of a stranger’s hand.

Then, with the ease of clicking over some cash via electronic services like PayPal or GoFundMe, the app makes it possible for those strangers to contribute to the homeless person’s specific needs or goals — bus fares, haircuts, a pair of shoes, job training.

And, just as valuable, if in a different way, the donors also can write notes of encouragement, like the one sent to a 35-year-old homeless man in San Clemente.

The app is called Samaritan, a high-tech manifestation of the “who is my neighbor” parable from the Gospel of Luke. On this digital platform, the Good Samaritan neighbor can be anyone — near or far. In some cases, the homeless people being helped have a Bluetooth enabled device called a “Blue Beacon” that can act as a digital wallet to secure documentation.

It also can send an electronic alert to notify Samaritan donors that someone in their vicinity is on the platform. The app then can take the donor to the Samaritan profile for spur-of-the-moment assistance.

Since its inception five years ago in Seattle, a city with one of the nation’s largest homeless populations, the Samaritan app has come to two groups in Southern California — nonprofit service providers Family Assistance Ministries (FAM), in south Orange County, and Pathways to Your Future in Los Angeles County. Both are using Samaritan with some of their clients.

Though the app profiles are incomplete, there’s enough information about each recipient’s background and their specific goals to illustrate their individuality. Their profiles and any donated funds — labeled on the app as “community investments” — are tracked and maintained by case managers who help keep their homeless clients on a path toward progress, and provide oversight so the money is spent as intended.

To Bill Greco, the board member at Pathways to Your Future who brought Samaritan to the organization’s attention, the gift/investment is a two-way street, with potential for the recipients and the donors that goes beyond dollars and cents.

“People just kind of walk by these invisible folks on street corners not knowing what to do,” Greco said.

“(Samaritan) can help overcome the barriers many of us face in not knowing how to deal with this overwhelming issue.”

Samaritan was started by Seattle entrepreneur Jonathan Kumar. His immigrant childhood exposed him to some of the struggles faced by the app’s homeless beneficiaries, and his experience with startups gave him the tech savvy for social innovation. Others on the team have dealt with similar issues, or grew up where homelessness is prevalent, said Eric Turner, who works as a digital storyteller for Samaritan.

A two-year pilot program in Seattle involved 500 homeless people. It ended with 56% of the clients improving their self sufficiency and with 52 individuals finding housing, a job, or both, Turner said. More than 15,000 anonymous donors (known as “team members” on Samaritan) contributed funds.

In addition to Seattle and Southern California, Samaritan also is being used in Portland, Oklahoma City and Denver, listing about 215 homeless individuals. The platform has raised $58,250 in those communities so far in 2021, Turner said.

The donors, according to Turner, range in age from 25 to 55, and they have distinct giving patterns.

“Older people tend to donate less often but in higher amounts,” Turner said. “Younger people have less money to give but are more willing to send messages of encouragement.”

The FAM project is fueled by a $40,000 grant from the Orange County Community Foundation. The faith-based nonprofit has a main hub in a San Clemente business park and two satellite offices in Laguna Niguel and San Juan Capistrano, providing homeless prevention and intervention services to about 170 people in south county. The group offers a food pantry and help with utility bills, temporary shelter and other resources.

The organization has launched a pilot project of its own involving Samaritan and has five of the 15 recipients it expects to bring on board this year. They are a mix of men and women, although gender is not always clear from their Samaritan profiles — again, to maintain their privacy. Three have jobs, one is working on a professional certification, and the other is getting job coaching.

Who are they? Take a look at the app.

There’s ACooper, who fought a life-threatening kidney illness that left him unemployed and with thousands of dollars of debt. More bad luck followed: Getting t-boned by a car involved in a high-speed chase. It all left ACooper without housing and in search of employment.

Elizabeth K is a single mom with a toddler. They stay at a women’s shelter. She lost her job as a massage therapist because of the coronavirus pandemic and now she needs to be re-certified and insured to return to her profession.

Sun Seeker’s troubles stem from his wife’s 2017 homicide during a violent assault in Brazil. Diagnosed with PTSD and depression, Sun Seeker was living in his vehicle but recently moved into permanent supportive housing. His need now, according to the app, is basic furnishing.

RubyGloomSailorMoon is a single mother of two. A victim of domestic violence, she’s been homeless for two years but is trying to restart her life. She is looking for work and needs clothes to wear to job interviews. She’s also enrolled to return to school in the fall.

Jeffrey A., whose name is misspelled on the app as “Jeffery,” is a San Clemente native who lived much of his life homeless on the streets with his mother. He and his mother both abused drugs and alcohol, but Jeffrey has been sober for two years. He’s met some of his goals; finding a full-time job and saving for a car. But he never finished high school and wants to get his GED and further his education.

In recent weeks Jeffrey A. and his mother were living in his car, though FAM recently connected him to a housing program. Being part of the Samaritan app project “brings joy to my heart,” Jeffrey said, is eyes smiling above a pandemic face mask.

“It just encourages me to make the right choices, to keep going straight forward; every step in the right direction.”

He said he can only remember getting a similar hand up when he landed odd jobs as a day laborer. He’s used some Samaritan funds to buy what he called “interview-able” clothes, including two long-sleeve shirts, a pair of slacks, a belt and some dress shoes.

He likes Samaritan’s motto — “Walk with, not by” — but he also adds to it:

The goal for FAM is to connect 30 homeless clients to Samaritan over the next two years, and to develop a base of donors for each. The grant money helps pay for the extra time case managers spend working with clients and overseeing profiles and donations. The organization is hoping to bring in more donors by getting the word out to supporters, civic organizations and the community.

“This could turn some hearts, dispelling misconceptions that (homeless people) don’t want to be working,”  Andrade said.

“This is giving a very clear message that they surely do want to work,” she added. “And they want to be accountable.”

Pathways to the Future, founded in south Los Angeles some 30 years ago by a former homeless man, also began using the Samaritan platform in January. Today, it has 10 homeless people listed on the app and 50 donors.

Greco, the Pathways board member, said his group plans to bring about 200 homeless people onto Samaritan, adding participants from the skid row district of Los Angeles, Venice Beach, and Santa Monica.

The challenge, he said, is getting potential donors familiar with the app. Toward that end, Pathways will partner with Joy Ride, a bicycle tour and rental company in Santa Monica, to launch an awareness campaign about Samaritan that will run from August through October. The “Change a Life” campaign will encourage Joy Ride riders to download and make donations through the Samaritan app. Find out more at ptyf.org/join-the-samaritan-team.