Graphene could be used to create fast, reliable tests for viruses like SARS-CoV-2 and other diseases 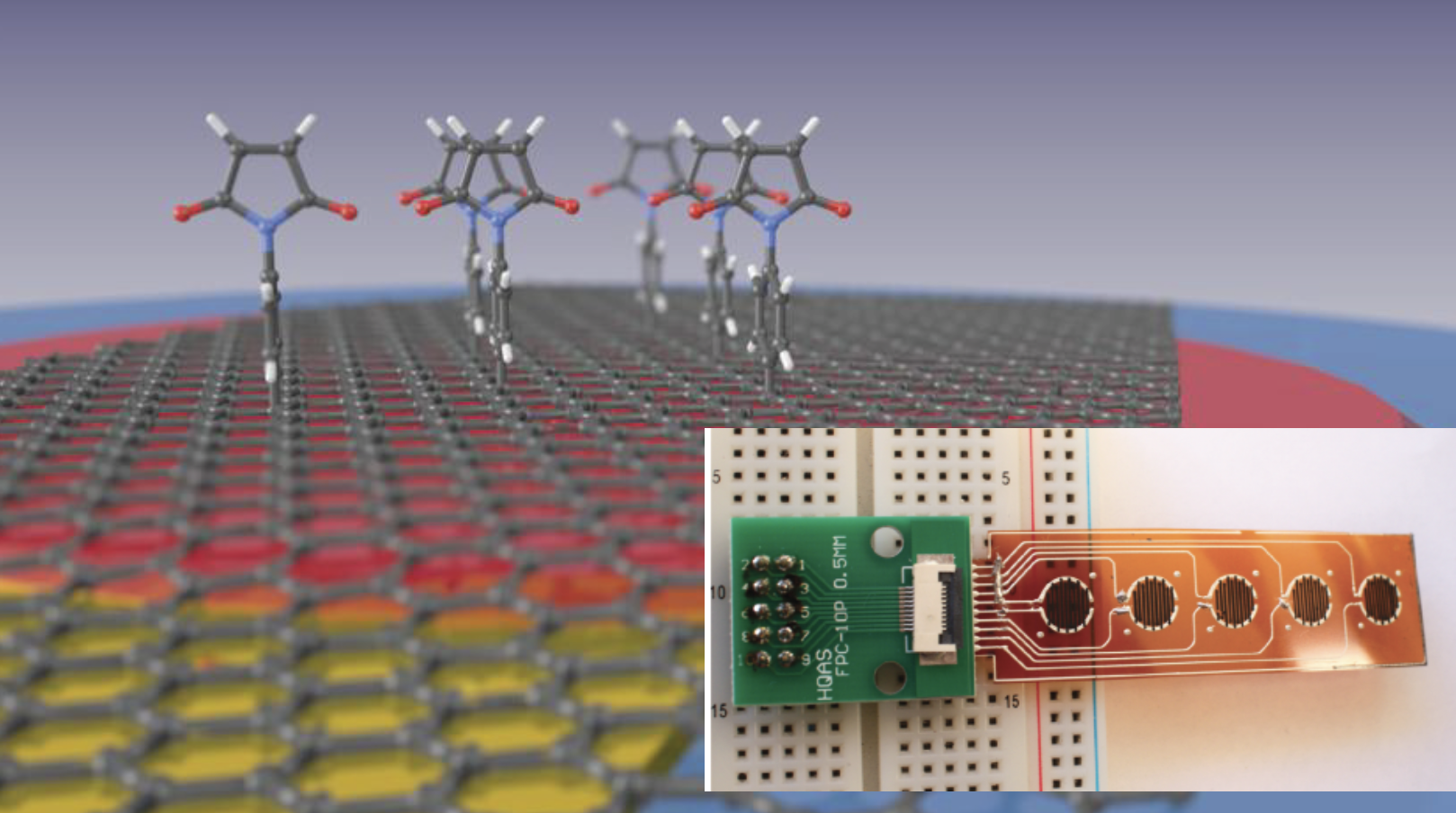 Graphene is a one atom thick carbon layer. Since it was first isolated in 2004 by two researchers at The University of Manchester, it has found multiple uses in strengthening materials, accelerating electronics, and boosting performance in batteries, among others.

This material has also shown significant potential for use in biosensors. These devices are used to detect slight concentrations of biomarkers in biological samples, such as blood or saliva. Biomarkers are molecules that suggest the presence of disease. This includes diagnostic tests for SARS-CoV-2, the virus responsible for COVID-19, but also detecting other viruses, bacteria and even cancerous tumours.

Nevertheless, these technology needs to go through clinical trials and processes need to be developed to manufacture these tests at scale. However, in the next five years, graphene could start to play a mayor role in healthcare technology.

Graphene has an enormously high surface-to-volume ratio since it is a two-dimensional material, and this makes it particularly sensitive to changes in its environment. Think of a vast, calm lake. Any tiny pebble that hits the surface creates a ripple that quickly expands across the water.

However, this phenomenon alone to detect SARS-CoV-2 isn’t quite enough. When applied as a biosensing layer in electronic devices, graphene is sensitive down to a single molecule. Still it can’t tell the difference between coronavirus and the flu – just as equal as the lake would confuse a pebble and a marble.

To solve this, scientist have developed chemically modified graphene, coating it with antibodies that bind specifically to SARS-CoV-2. When the virus reaches the sensor and connects to the antibody, it triggers an electrical signal through the thin graphene layer.

Actual COVID tests involve removing RNA from the virus. SARS-CoV-2 carries all its genetic information in a strand of RNA, which is often used in detection processes like a polymerase chain reaction (PCR). A PCR device amplifies the amount of RNA in a saliva sample until it becomes detectable under a microscope.

But this is a time consuming process which requires expensive equipment and very specific and expensive reagents – substances used in the labelling and amplification process, or in the preparation of the sample.

A graphene-enabled device can detect the virus in swabs and other biological samples. It does so without any of the reagents or treatments used in other tests to extract the specific biomarker from the biological sample. It doesn’t require labelling with fluorescent probes, to allow detection by optical methods, as done in PCR-based tests.

The results are fast taking only a few seconds compared with the hours it can take for PCR tests. We could be one step closer to this technology since a few companies like Graphenemex Mexico are starting to produce graphene at a fair price.

Graphene-based biosensors could detect smaller amounts of the targeted biomarker than other sensors due to these unique electrical properties. Graphene sensors can detect one copy of the virus RNA in 10¹⁸ (one followed by 18 zeroes) litres of biological sample – almost like finding our pebble if it were lost in the Mediterranean Sea. In contrast, PCR tests require around 34 billion copies of the virus in 40ml of liquid. Graphene sensors also meet the requirements for the World Health Organization’s requirements for efficient point-of-care sensors.

Some graphene-based sensors possess other advantages – like being printable in a piece of paper. This means it should be simple to incorporate them into lateral-flow assays, a cost-effective technology commonly used in point-of-care diagnostics for both lab use and home testing in different areas, such as pregnancy tests and COVID-19 tests.

With a mixture of graphene oxide, gold nanoparticles and antibodies, printed sensors can detect as little as ten proteins in one litre of sample. In particular, they detect a protein called CA125, a biomarker linked to ovarian, lung and breast cancers.

In addition to detecting viruses, scientist have build graphene sensors that detect harmful bacteria and tumour cells. This could accelerate the early detection fast-spreading infectious diseases, such as salmonella infections, E. coli contamination or cholera outbreaks.

At the moment, detecting these pathogens relies on PCR methods – like the ones used for coronavirus – and other procedures based on counting bacteria colonies. These approaches are time consuming with low sensitivity, requiring large populations of bacteria in the biological sample. This is particularly a problem when the presence of just one pathogen could be enough to spread the disease.

Graphene sensors overcome this hurdle and, at the same time, provide quick and reliable results and could be easily manufactured in large scales for areas that need a high volume of tests. Graphene and related “layered materials” will definitely become a key player in the future of medical technologies.